Milk The Cow’s Chef Event Series is challenging the notion of the traditional cheese board, bringing curd to the kitchen. From “bogan cheese” to “training wheels cheese”, Laura Lown uses casual cheese slang as easily as she does formal terminology. As Milk The Cow’s head cheesemonger, Lown is a lady in the know, tossing the names of cattle breeds, specific alpine regions, aging processes and farming traditions into general conversation.

Lown is also behind Milk The Cow’s new Chef Event Series, where Melbourne chefs are given free reign over the fromagerie’s four-metre cabinet to create four to six dishes. “Although the industry is growing, and people are realising what they can do with cheese, people can go so much further with it,” Lown says.

The dishes will be matched with wines and the event will host talks by wine representatives and local producers, as well as Lown and the featured chef. The first menu has Daniel Wilson of the small Huxta-empire (Huxtable, Huxtaburger, author of the Huxtabook), at the helm with creations including a triple cream cheese ice-cream atop his three-cheese dessert. Jason Jones of Moroccan inspired B’Stilla and Mexican eatery Mamasita is already confirmed for the second event.

“Mexicans use quite a bit of cheese already, so that would be simple,” Jones says, opting to showcase Moroccan flavours instead. “It’s going to be challenging. None of the Moroccan food I know has ballsy cheese.”

Taking on this challenge, Lown and Jones are opting for cheeses that “have that finesse,” Lown says, to stand up to the loud spices in Moroccan cuisine. For instance, one dish will feature Beaufort D’Alpage, dubbed by Lown as “the king of alpine cheese” – one wheel requires 500 to 700 litres of milk from just one breed of cow indigenous to the Savoie mountain pastures of France. “The possibilities are endless,” Lown says.

Tickets to the Milk the Cow dinner with Daniel Wilson on Monday April 28 are available at milkthecow.com.au for $120. There are still some tickets set aside today for Broadsheet readers. Tickets to the next dinner with Jason Jones on June 30 are on sale here. 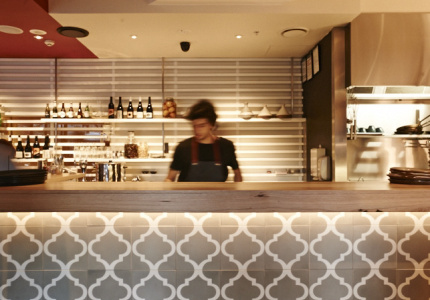