F.A.T (Fried and Tasty) in Brunswick East is by no means jumping on the fried-chicken bandwagon – the family has been serving finger-lickin’ goodness for more than three decades. 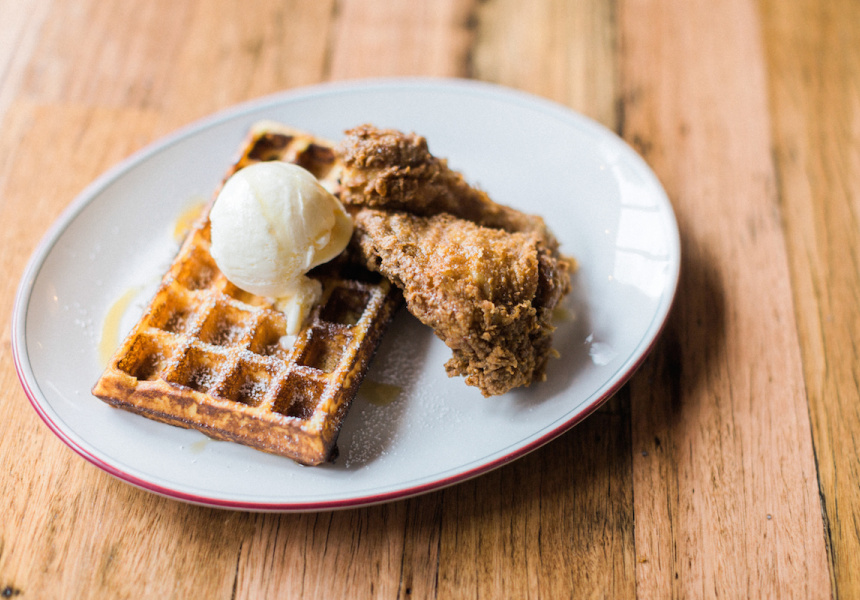 F.A.T. owners and first cousins Jonathan Ioannou and Terrence Farrugia have fried chicken in their DNA. It’s been passed down from Ioannou’s parents, Andrew and Freda, who have had Andrew’s Chicken Joint in Lorne for 35 years. But just because they’re family doesn’t mean it was easy for the next generation to get the recipe.

“He finally decided to pass it down. We just had to give him a share of the business,” says Farrugia, only half joking.

The duo is also behind Two Little Pigs on nearby Sydney Road, and spied the space beneath an apartment development on their way home from work. The big space is dominated by concrete, timber, orange highlights and features a graphic of Biggie Smalls holding a drumstick on the back wall. Cheeky posters reading “touch my fat breast” and “fat mother clucker” cause double takes. Quotes relevant to the menu are plastered above the kitchen.

There’s one from Shrek’s Donkey – “In the morning, I’m making waffles!” – a nod to F.A.T’s buttermilk beauties with fried chicken, ice cream and maple syrup. Another is by Kelis, referring to the Milo, salted caramel, apple crumble and vanilla malt milkshakes that “bring the boys to the yard”. There’s also Melbourne Bitter, Fat Yak and Minimum Chips on tap.

There are six chicken-burger options – mostly fried, one grilled and one with faux meat for vegetarians and vegans. And of course, there’s the chicken. Pick your favourite part of the bird, then add sides such as poutine, potato or chop salad, chips and corn on the cob.

Unlike other fried chicken shops that have popped up in the last couple of years, F.A.T uses a pressure fryer, which is locked up tight during the frying process and pumped with pressure to push more flavour into the MSG-free and RSPCA-approved meat.

But perhaps our favourite tidbit of information is that Broadsheet can take some credit for the name. After reading an article called “Fried and Tested”, Farrugia suggested it as a name to his cousin. Ioannou misheard “tested” as “tasty” and Fried and Tasty was hatched. First bucket’s on you, boys.