The Fat Duck is Open

Good news Heston fans (the ones with tickets), the wait is over. After years of preparation and months of building, The Fat Duck is open for service. 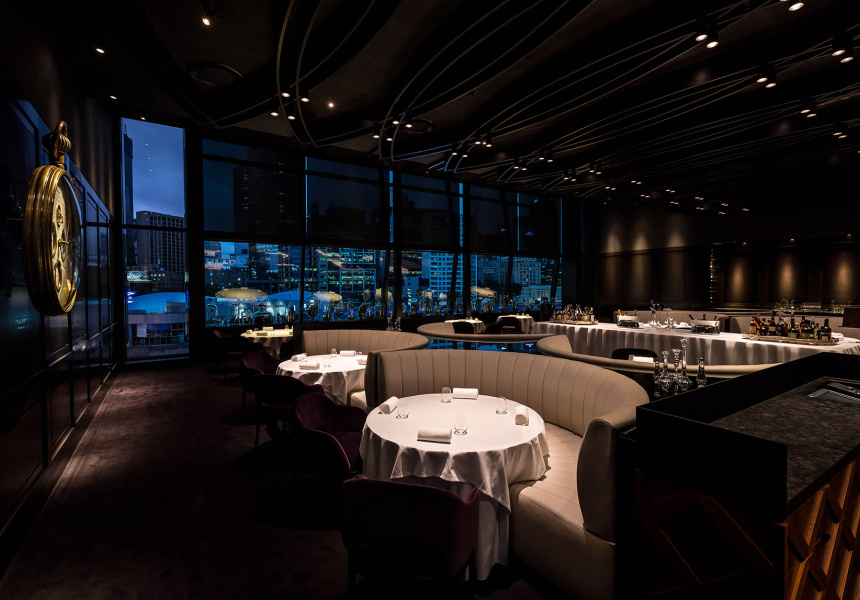 Sound Of The Sea

Today Heston Blumenthal’s enormously anticipated fine-dining restaurant, The Fat Duck, swung open the doors of its temporary – but by no means any less lavish – new home at Crown. And the man himself, nursing an understandable mix of nerves, exhaustion and elation, was there to share the moment with us.

I’m seated alongside Blumenthal at the “chef’s table”, an eight-seat leather banquette that sits inside The Fat Duck’s kitchen. It’s cosy. We’re side by side, and Blumenthal, though ever cordial, is keeping a watchful eye on the kitchen’s proceedings. There’s a whir from the docket machine. “Is that the first check?” he calls out to his team. “Oui chef!” And away they go, serving Melbourne’s first taste of The Fat Duck.

The logistics of the project, which has seen Blumenthal relocate his entire restaurant staff to Melbourne for a six-month stay, is nothing short of remarkable. “It’s been a huge undertaking,” the British chef explains. “We’ve left nothing to chance. Everything was planned right down to its bare bones. This is the Duck migrating to Melbourne. We wanted to get it here with its feathers combed.”

Interiors at the secluded, third-floor space are suitably theatrical; including many elements of the sense of surprise and whimsy that Blumenthal is so loved for, including artwork from MONA and a rather playful Alice in Wonderland/Mad Hatter’s theme – something that has become signature Blumenthal. “Compared to Bray (The Fat Duck’s original location), the space is very different,” Blumenthal says. “For a start, it’s a lot bigger. And here, along with the main service kitchen we’ve got another four kitchens which we use for prep.”

First impressions are dramatic. A long, dark entrance hall, lit by the flicker of a screen at one end shows chefs working away in the kitchen before a dark, sliding door leads guests into the expansive, light-filled dining room. Blumenthal describes the entrance as like, “Going down the rabbit hole.” And it acts as a telling metaphor for the experience that is to come.

Featuring floor-to-ceiling windows with views across the Yarra to the city, the 50-seat dining room is a study in quiet sophistication. Adding intrigue to the fit-out are elements such as the huge 19,500-piece wall-mounted jigsaw puzzle, which we’re told will involve the participation of every guest who visits the restaurant.

Then there’s the bespoke Mad Hatter-style clock, which rather than showing the actual time, instead measures the number of days before The Fat Duck returns home to Bray. When The Fat Duck closes here in August, the clock will return to Bray, along with the restaurant’s team, and the clock will act as a lasting souvenir of the crew’s time in Melbourne.

Menu-wise, you can expect many of the signature dishes that Blumenthal’s original Fat Duck is known for. Snail porridge, Sounds of the Sea and the Mad Hatter’s Tea Party will all feature, while a smattering of standout local ingredients, such as marron and Western Australian truffles, have also been integrated.

So can diners expect a replica of the original Fat Duck experience, or will there be a Melbourne edge to it? “We’re still approaching things in the same way as we always have,” says Blumenthal. “We’ve made a few tweaks with the local produce, and we’re doing things like local marron, which we do with a birch syrup.” Adding, “There are also a few things that I don’t really want to give away, but they very much have an Australian slant to them.”

It won’t be a secret for long – already the first lunch guests today have experienced the full menu, as will those eagerly waiting with tickets. For everyone else, Heston’s wonderland will just have to remain but a dream.

"SOUND OF THE SEA"