Dan Hong is about to unleash his first cookbook, and it’s filled with all the food we love to eat. We chat to the Sydney chef about the process of writing, cooking, and how it all comes back to his mum. 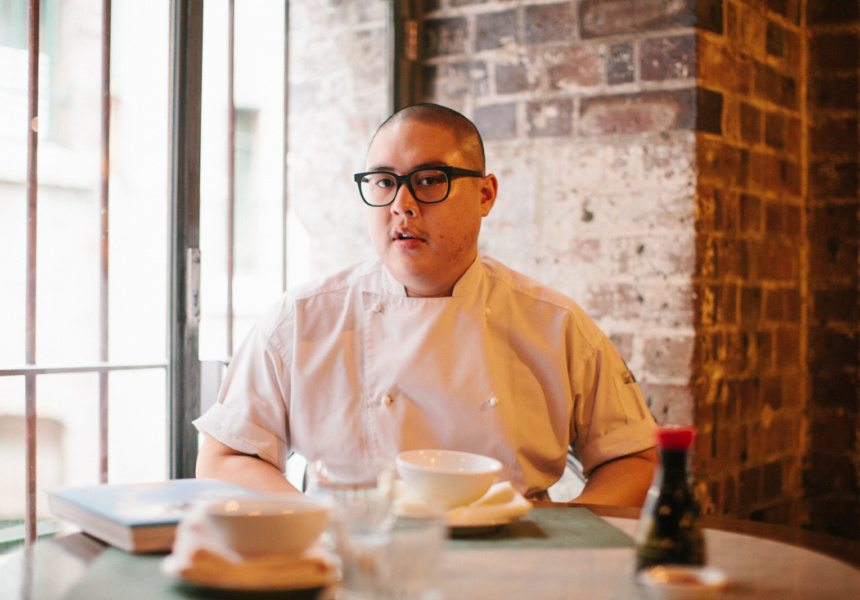 Which would you say is more glorious a feeling: the sight of Kanye West eating in your restaurant twice in two days? Or holding your newly published cookbook in your hands? For chef Dan Hong, it’s hard to say, both happened to him in the same week.

West came into Mr. Wong – Hong’s restaurant – for lunch while on tour in Sydney last week and liked it so damn much he brought his wife, Kim, along for a second meal the next day. Not one for fan-girling, Hong says that the release of his new cookbook, Mr Hong, beats KimYe tucking into his honey-lemon chicken wings. “I’m really proud of it,” he says. “I've had a few other book offers before this one, but they weren't what I wanted. One wanted me to just do dude food, another one was a book on Vietnamese food, but it wasn't my life story.”

Hong oversees Merivale restaurants Ms. G’s and El Loco, and his first book is far from the dude-food bible that some might expect from the chef that lent Merivale a good dose of street cred. Mr Hong tells the chef’s story, and, like all good stories should, it starts with a foreward by his mum, Angie. “When most chefs are asked for a foreward for their books, it’s always some world-class chef they hardly know,” says Hong, “but I asked my mother because she knows me so well.” Indeed, it was his mother’s cooking that began it all, and actually, if Hong had his way, would end it all, too. “She makes bún bò huê – a traditional pork and noodle soup with lemongrass. That's my death-row dish,” he says. You’ll find a recipe for it on page 214.

The book is colourful and approachable, one for high rotation on the kitchen bench rather than the mantlepiece. “Eighty-five per cent of the recipes are really easy, and that's what I wanted. I didn't want it to be a coffee-table book,” says Hong. “I want people to get dirty in the kitchen. They'll probably realise how easy the recipes are and ask why they're paying 30 bucks for this [in my restaurants].”

The book is peppered with anecdotes and grainy photos from Hong’s apprenticeship days at Longrain, plus nods to his various mentors. The recipes chosen trace Hong’s career running restaurants with the Merivale group, beginning at the now-closed Lotus on Challis Street. In fact, it was the buzz started by Hong’s soft and squishy, Heinz ketchup-sauced Lotus cheeseburger (find out how to make it on page 40) that prompted Merivale’s Justin Hemmes to push him as the hospitality group’s new poster boy when they opened Ms. G’s in 2010. Following on from his success there, Hong then went on to work with Hemmes to open Mexican taco joint El Loco at the Excelsior Hotel in 2011, and the huge, 250-seater CBD Chinese restaurant, Mr. Wong in 2012. “If it wasn't for Justin, there wouldn't be a Ms. G's, there wouldn't be a Mr. Wong and there wouldn't be El Loco. He’s one of the guys who almost had faith in me before I even had faith in myself,” says Hong.

Hemmes may finance, build and operate the restaurants that Hong oversees, but Hong supplies the creative spark, and this book is a greatest hits from Lotus, Ms G’s, Mr Wong and El Loco. All the signature dishes are here, from the Ms. G’s Stoner’s Delight – a sugary homage to Hong’s days of smoking dope after school and raiding the junk-food section of the supermarket – to the sweet-and-sour lamb ribs; the one recipe that Hong is asked for time and time again. Fans of the black-pepper crab, mapo tofu or roast duck at Mr. Wong will be bookmarking a few pages, as each element is broken down into easy steps.

Hong’s admiration for chef David Chang of the Momofuku group of restaurants is no secret, and Chang’s cookbook, Momofuku, was a huge inspiration. “That was one of the most game-changing cookbooks in the last few years,” says Hong. “[Chang’s] philosophy is very similar to mine; there are no rules when creating dishes – they just have to be delicious and fun. That's what I'm all about.”

Mr Hong is published by Murdoch Books and is available in all good bookstores nation wide from October 1. Hong will also be doing a guest lunch service at Supernormal on Thursday October 9 from 12.30pm. The set price is $120 per person, including all food and drinks. To reserve a table, call (03) 9650 8688.