A Fancified Filet-o-Fish, a Remixed Reuben and a Spicy Sichuan-Eggplant Number: 10 New Sandwiches to Try in Melbourne Right Now

Some are from dedicated sanga shops – including a cavernous cafe and a hole-in-the-wall spot – while other offerings come via a celebrity chef’s new restaurant, a sprawling beer garden and a Vietnamese-inspired diner. All, however, are raising Melbourne’s sandwich stakes. 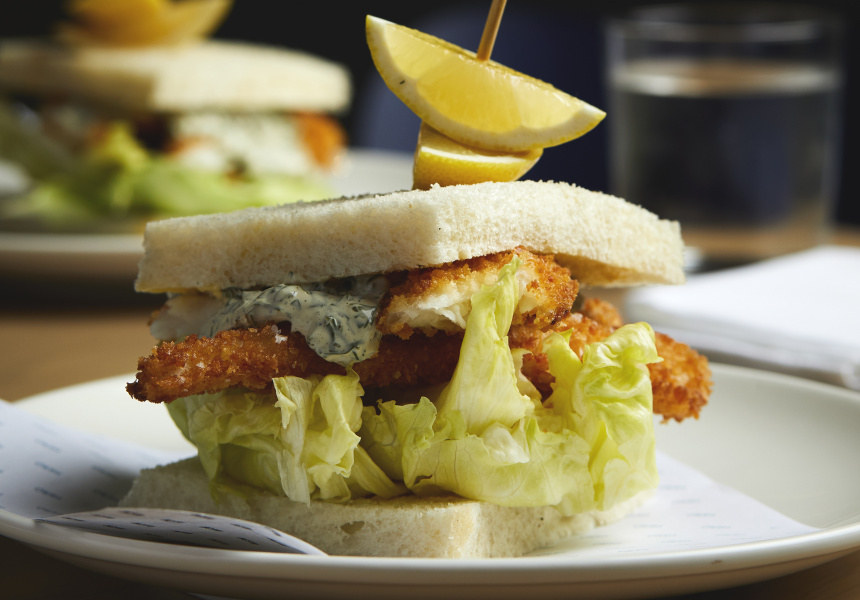 Melbourne’s already-strong sandwich game has been strengthened this year. There’s been an unignorable influx of dedicated sanga shops, and other new spots doing exceptional sandwiches. Here are 10 of our favourite newcomers. Start ticking them off.

Crumbed-fish sandwich at Hero
Picture a Macca’s Filet-o-Fish, completely fancified. That’s exactly what celebrity chef Karen Martini is doing at her elegantly understated new CBD restaurant – the culinary epicentre of the recently reopened Acmi. It’s a stacked-up white-bread number (held together by a skewer) with crumbed fish, crisp iceberg and a healthy slathering of tartare. Martini regularly ate it for lunch during lockdown.

Fried-chicken katsu sando at Le Bajo
Almost everything at this North Melbourne cafe – from one of the founders of Bali’s Potato Head Beach Club – revolves around fluffy, house-baked shokupan (Japanese milk bread). And it draws a crowd. But our pick is the classic fried-chicken katsu sando; it’s doused with house-made miso sauce and freshened up with cabbage. Get it alongside “dirty” fries tossed in your choice of seaweed-y miso mayo or teriyaki butter.

Porchetta roll at Ugo Cucina Popolare
When we covered the opening of Cannoleria by That’s Amore’s panini bar, in an unassuming Heidelberg West warehouse, co-owner Dario Di Clerico insisted we try the stomping porchetta roll. We did – and now we know why. He grew up in Abruzzo in Italy and cut his teeth working with the region’s porchetta king. So, his porchetta is incredibly tender, with a sticky-sweet crackling that gets stuck in your teeth (in the best way). It comes with salsa verde and crunchy giardiniera (Italian pickled vegetables) on Noisette ciabatta.

Ox-tongue Reuben at Zymurgy
A collab between Hop Nation Brewing Co and Navi’s Julian Hills, this West Footscray pop-up punches well above its weight. It’s like a barbeque at your mate’s place, if your mate brewed boundary-pushing beers and had fine-dining chops. There’s a focus on all things charcoal-fired and fermented, including in Hills’ crowd-favourite Reuben. It subs out the rudimentary corned beef for ox tongue, with the addition of homemade sauerkraut and ooey-gooey Comté.

Beef-cheek baguette at Greta
Mopping up leftover sugo with a piece of bread is one of life’s simple pleasures. Take that to the next level with this pesto-y beef-cheek baguette; it comes with a small bowl of Napoli sauce for dipping in-between bites. Find it at Greta, a schmick new Eurocentric spot in the CBD (from the siblings behind Mayday in Richmond and Maverick inside the 80 Collins precinct), where sandwiches reign supreme.

Banh mi “finger” at New Quarter
A teeny, two-bite banh mi is the perfect snacky start to your meal at the new New Quarter in Richmond, a Vietnamese-inspired diner by the Hanoi Hannah and Tokyo Tina team. For the banh mi “finger”, a flattened baguette is filled with silky whipped chicken liver pate (that oozes everywhere when you bite into it), crisp chicken skin and pickled cucumber.

Cubano at Rusty’s Sandwich Parlour
Plonked on a busy strip of Nicholson Street in Brunswick East is this new sanga shop by the owners of vegan-friendly pizza bar Green Acre. There are around 10 sandwiches on the menu, plus a rotating special or two, but the two-hands-necessary Cubano is a standout. A sourdough bun is stuffed with a ton of orange-braised pulled pork, Swiss cheese, pickles and Dijon mustard. Skip breakfast.

Tony Baloney at King William
At this regally named, hole-in-the-wall spot on Flinders Lane, #seriouslyupstandingsandwiches is the tagline. So, it makes sense there’s one that heroes the king of luncheon meats: mortadella. Here, it’s crisp-fried and served on Tuscan flatbread with a lick of house-made olive jam, melty provolone and rocket. Ooft.

Sichuan-eggplant baguette at Baby Snakes
Go for the ridiculously colourful stairwell, stay for the excellent deli sandwiches – and “aggressively-not-pretentious” vino program – at this new, good-time Footscray bar. It’s by Mark Nelson, who co-founded The Moon in Collingwood and Milton Wine Shop in Malvern before recently stepping away to open Baby Snakes. The spicy Sichuan braised-eggplant baguette with pickled cucumber and sesame is excellent.

Fruit sando at Le Bajo
That aforementioned shokupan isn’t just the star of savoury sandos at Le Bajo. The warehouse cafe also dishes out less commonly seen fruit sandos, where whipped cream and seasonal fruits such as strawberries, kiwi and mango are encased in crustless milk bread (which is then wrapped in paper, so the fillings don’t go walkabout).