Evie is an ’80s disco diva with a conscience. 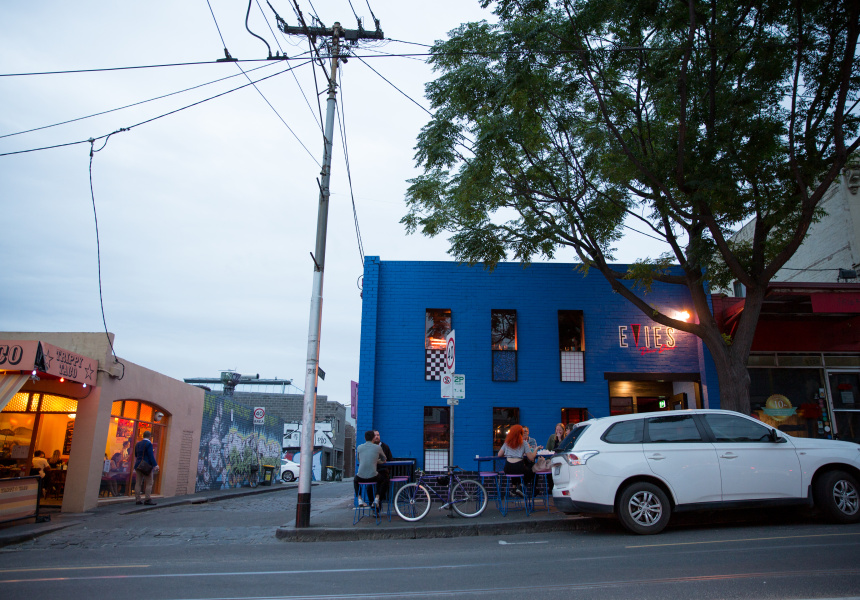 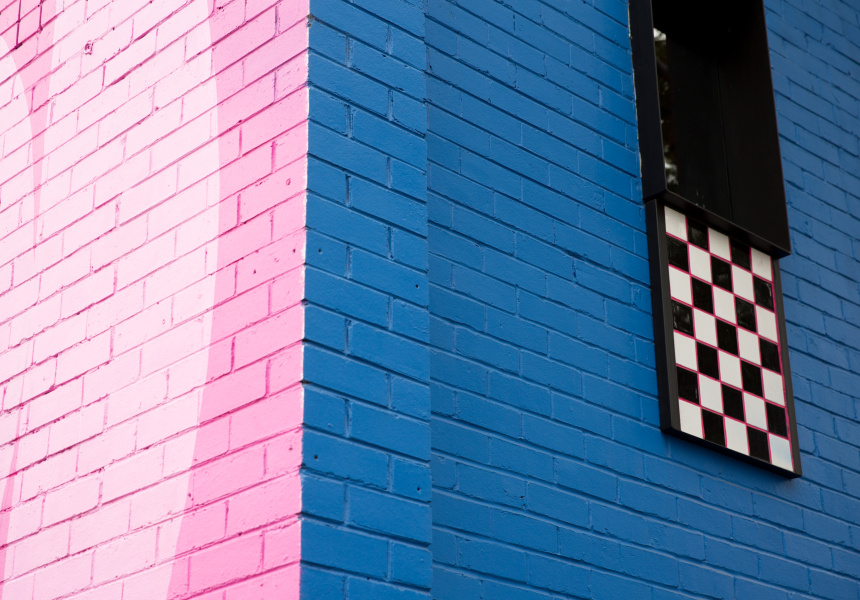 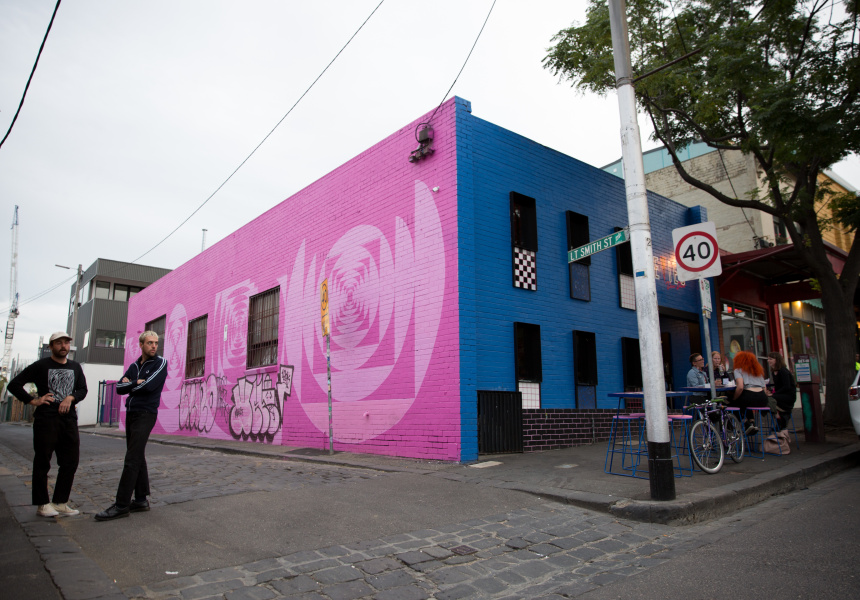 Aesthetically, it’s filled with bold geometrics and neon noir, and references to the Memphis Group – the ’80s Italian design collective known for its frivolous colours and shapes. The corner site has been almost completely dipped in two of the decade’s most quintessential colours: bubblegum pink and cobalt blue.

Cali-Mex bar Beach Burrito occupied the site previously and yes, the skate bowl has been filled in (which apparently took three days). The “pool” carries over in spirit, though.

“Filling in the bowl really opened up a spacious d-floor and, with a night-club-quality sound system and DJ booth on the mezzanine, it’s worked out to be a great venue [to party] with all your mates,” says owner Wayne Markus.

To pay homage to the pool that once lived, the space is painted blue to represent a body of water. The words “AQUA PROFONDA”, spread large across the floor, playfully reference the same sign at Fitzroy Swimming Pool – which was a Latin misspelling of the Italian acqua. Its English translation is “deep water”.

Custom-made tables – painted in high-gloss white – are designed to look like diving boards when viewed from above, and can also be folded back at the end of dinner service to make way for more dancers.

Other than this radical change, much of Beach Burrito’s structure and interior remain, which came in handy as both venues play to the ’80s theme.

“Our take on the ’80s is slightly different to Beach Burrito’s though, which centred around a darker and more grungy skating culture,” says Markus. “We wanted to celebrate ’80s pop culture and music with a more flamboyant space attuned to icons like Prince and Madonna.”

Markus is very familiar with Gertrude Street, having previously run the Wilde on the same strip for five years.

“[The Wilde] offered British gastro-pub food and it was a hard sell,” he says. “I’ve got to know the crowd over the years and our American diner menu that’s also 50 per cent vegan is a much better fit for the area.”

There’s a vegan chilli-cheese dog with tofu con carne and cashew sour cream. Even the spiked shakes can be made animal-free using soy milk and vegan ice-cream.

“Our vegan chicken burger is actually our best selling burger on the menu and comes with a soy protein burger and vegan cheese,” says Markus.

Evie’s is open for lunch, dinner and late into the night, with the kitchen operating until close. For a mid-boogie break, grab a fried-chicken waffle bowl with salted-peanut-butter-maple sauce or go for a cheeseburger with a side of loaded fries.

Waste minimisation in the bar is also a priority. Re-usable glass straws replace disposable plastic ones and almost all of the beers and organic wines on tap arrive in large kegs, rather than individually packaged bottles and cans.

“Everything is locally sourced, even down to the syrups in the soda guns and the glass straws from Thomastown, which are made especially for us,” says Markus.

The venue’s signature night is Disco Thursdays, hosted by comedian Callum Padgham and Josh Aubry of Melbourne band the Cherry Dolls. Despite the venue’s name, it’s the only night that will feature a full evening of classic disco on the sound system (although the jukebox will remain well-stocked with disco hits). The rest of the week will feature a variety of danceable music from tech-house to electro.

Markus aims to host regular events in the way of trivia, weekend disco yoga and monthly vintage markets. The venue caters to a whopping 170 patrons, so it accommodates large groups well. Exclusive function hire is available for the entire space or, for a group of up to 60 guests, you can book the entirety of the mezzanine level, complete with its own bar.

This article was updated on March 23.