Produced by Broadsheet in partnership
with Isle of Dogs.

Any new Wes Anderson film is cause for celebration – not least to dive once again into the director’s immersive worlds. In partnership with his new feature film, Isle of Dogs, we teamed up with The Everleigh to create a cocktail inspired by his singular aesthetic. 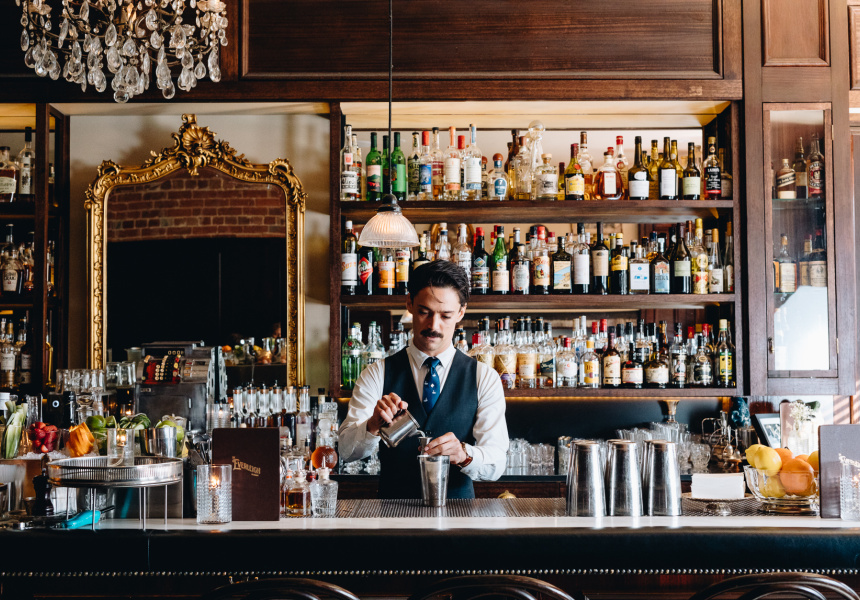 Wes Anderson’s new stop motion animation film, Isle of Dogs, is Anderson's first directorial feature since 2014's critically acclaimed The Grand Budapest Hotel. It tells the story of Atari Kobayashi, a 12 year old living in Megasaki City. When all canine pets are exiled to a vast garbage dump, Kobayashi sets off alone in a miniature plane and flies to Trash Island in search of his bodyguard-dog Spots. With the assistance of a pack of newly found mongrel friends, he begins an epic journey that will decide the fate and future of the entire Prefecture. The cast is classic Anderson and features the familiar voices of Edward Norton, Bill Murray, Tilda Swinton, Frances McDormand, Liev Schreiber and more.

To celebrate the release of Isle of Dogs, Broadsheet has teamed up with The Everleigh to create a one-off drink inspired by the Wes Anderson universe.

Fittingly, the bar has concocted a Hair of the Dog cocktail. “It’s a gin highball with fresh orange, lemon and ginger, so it’s got that spicy vibe to it, with some Angostura bitters, served tall,” assistant bar manager David Molyneux says. “Plenty of guys and ladies come in at 5pm, and they need something to help them get over their Saturday night, and this is definitely the ticket.”

The cocktail is what the American-style Fitzroy establishment would make if King (Bob Balaban) from Isle of Dogs were to take a seat at its golden-era bar. “The way that we go about choosing drinks for guests, as well as situations like this, is through our Bartender’s Choice approach: we have a conversation with people about their likes and dislikes and what kind of drink they’re after,” Molyneux says. “I really liked the idea of this scruffy looking dog, but he’s still got that regal moustache. He probably needs a Hair of the Dog himself.”

To come up with a drink suited to King, notes were taken from one of The Everleigh’s go-to resources. “A great book from 1934 printed by Herbert Jenkins lists a whole range of different tonics, hair-of-the-dog drinks, fizzers and highballs that would more commonly be drunk in the morning,” Molyneux says. “Around that era, it was pretty common to start your day with something to get you over the night before. A lot of hotel bars and saloons at that time had popular drinks like that.”

As with all of their house recipes, the finished product features freshly juiced ingredients and remains reflective of the recipe it grew from. “Myself and bar manager Felix Alsop chose the Bulldog Cooler from this guide to base it off. The name is sort of perfect as well,” he says. “We put our spin on it, changing the recipe slightly, giving it a bit more of that ginger spice, and the Angostura bitters to help with the aromatics of the drink.”

The cocktail even takes visual cues from the director’s aesthetic. “[Anderson’s work is] very visually striking. The way he directs is quite in your face and direct. This drink is of that style as well,” Molyneux says. “The drink comes out bright orange, and we plan to serve it on a royal-navy-blue silk napkin, giving that colour contrast Wes Anderson is famous for in his movies.”

Molyneux says this Hair of the Dog is something new for The Everleigh. “We’ve jazzed this one up to be more Wes Anderson. That’s something we wouldn’t normally do,” he says. “It’s a side step. An enhancement.”

Head down Gertrude Street between April 6 and April 22 for your chance to try this limited-edition Isle of Dogs cocktail at The Everleigh.

This article is produced by Broadsheet in partnership with *Isle of Dogs, the new film from Wes Anderson, in cinemas April 12. Watch the trailer below.*

Produced by Broadsheet in partnership
with Isle of Dogs.
Learn more about partner content on Broadsheet.