The Return of the Espy: Up the Stairs

The second stage of the Esplanade Hotel’s colossal transformation reveals two floors that have been closed to the public for years. There’s a Cantonese restaurant helmed by a former Longrain chef, two (more) cocktail bars and incredible views. 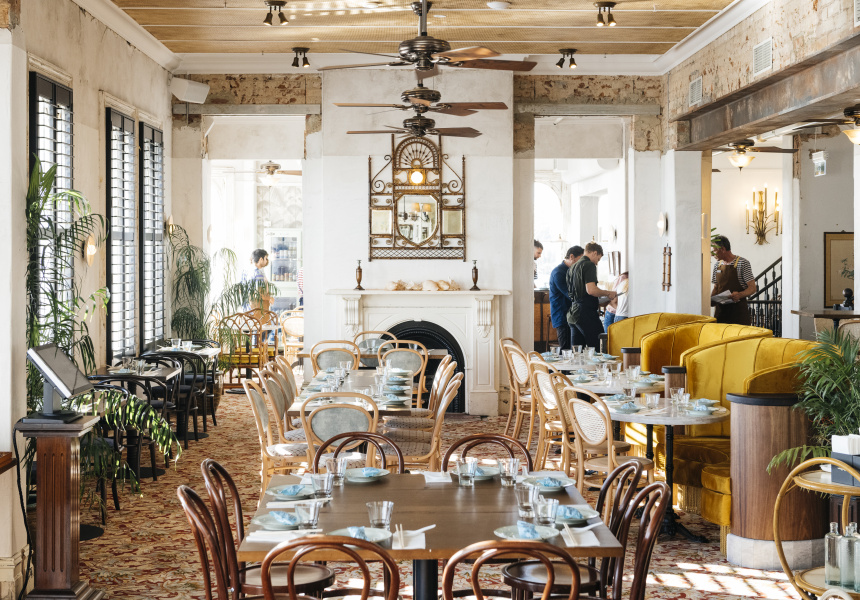 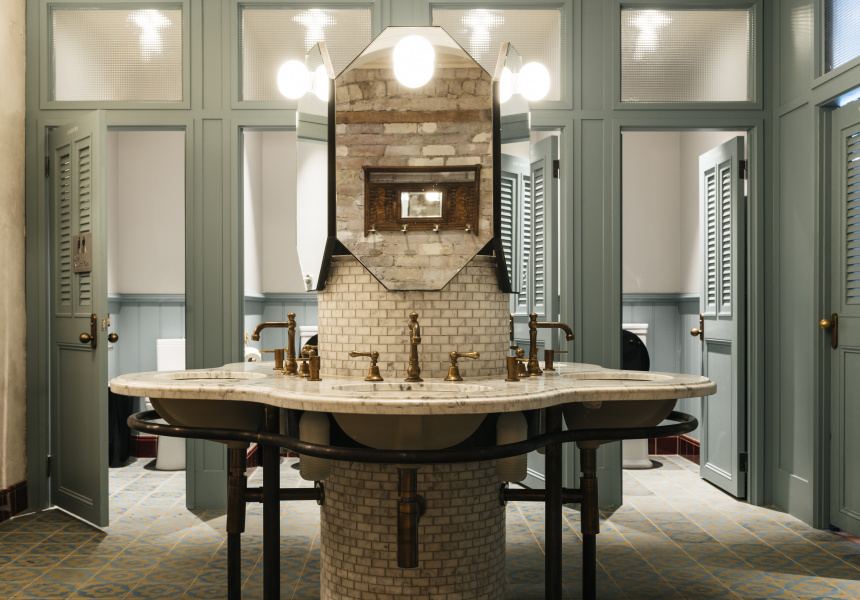 The iconic grand staircase inside the Espy is familiar to all who have visited – but how many of us have gone more than a few steps up?

While we’ve covered off the lower levels already, it still feels like we’ve barely scratched the surface of the colossal redevelopment of this grand old pub. The Sand Hill Road (Waterside Hotel, Garden State, Prahran Hotel) team has taken on not only bringing the Espy up to date, but also – maybe an easier task – luring drinkers to the upper levels for the first time.

There’s something ghostly and austere about walking up those steps. You ascend beneath a glittering chandelier and into classic Cantonese eatery Mya Tiger.

“The most obvious thing we could do was to create fine dining. We don’t like to make things too easy, so we wanted to challenge ourselves with something else,” Maskiell says. “There’s no red, there’s no gold, there’s no dragons.”

Unlike the downstairs restaurant The Espy Kitchen, Mya Tiger isn’t open plan, but with city and bay views over the tops of palm trees, you won’t mind too much. If people-watching is more your thing, then high tables offer a view down to the stairs and bar below. Every spot in the new Espy is designed to give you something interesting to look at, and no other space says that more than Mya Tiger. It also won’t blow your budget if you’re hoping to dive into a few cocktails later on.

Former Longrain head chef Sarah Chan takes charge of the food and has created a menu with nods to Chinese classics. Snacks include five-spice ribs and cumin lamb spring rolls. Raw kingfish is given an umami-rich, smoked-soy and truffle treatment, while the bao and dumpling menu features staples such as pork and chilli wontons and char siu pork bao. Larger dishes include XO pippies; steamed fish with ginger, soy and shallots; crispy pork noodles; and a whole roast duck.

The wine list is built around the flavours of Cantonese cooking, avoiding oaky whites and high-alcohol reds. There’s a healthy number of options by the glass, and by the bottle you’ll find a mix of local and New Zealand producers along with classic internationals – German riesling and malbec from Argentina – scattered through. There’s also a refurbished old fridge you’re encouraged to grab your own beer from. There’s Kirin and Asahi, and also more esoteric beers such as a seaweed sour beer from Sailors Grave Brewing, or the Dawn New England IPA from Hop Nation. Cocktails put regionally suitable twists on classics, such as Shiso-Shiso Mule, which features gin, passionfruit, shiso, lime and elderflower. There’s a kaffir lime Margarita, and the house Espresso Martini has an oolong tea infusion.

Behind Mya Tiger is cocktail bar the Green Room. There’s a marble bar, ceiling fans and hanging lights, which give it a real Foreign Correspondents Club vibe. Lurid green booths are offset by a mural on the back wall by Sydney-based artist Desmond Sweeney. Commissioned for the reopening, the work shows the view beyond the wall minus the cars and buildings. It’s Melbourne before we all arrived.

When Maskiell says the Espy gives us something to look at in every room, he means every room. The communal toilets have a dramatic marble and tile 360 wash basin, and if you need to powder your nose there’s a secretive ladies room with vintage chaise lounge and jungle-pattern wallpaper.

If you want to get up to level two, you’ll need to head back down the stairs and say hi to the concierge, who has the power to grant access to the uppermost level and cocktail bar called the Ghost of Alfred Felton. Felton was an entrepreneur, chemist, philanthropist and collector of art, and is said to once have been a resident of the Espy, living in the very rooms that now bear his name. When Sand Hill first entered the Espy, this was the worst space of the lot.

“When we took this on these were all derelict rooms. The walls were awful, there was pigeon shit everywhere,” he says. After lots of love and care, and because it has views right down St Kilda Pier, he now reckons it’s “the most beautiful spot” in the building.

The table-service cocktail bar has room for 150 and is divided into three rooms influenced by Felton’s life. The first is a library, full of old books the team has been furiously collecting. You can enjoy a crumbling copy of Jane Eyre, or flick through an illustrated Boys Almanac from the 1950s with your cocktail. The next room is all about art, and an array of artwork covers the walls without taking anything away from the view. The last room is a nod to Felton’s drug dispensing days with all sorts of old glass bottles dotted around. There is even a baby grand piano here, retrieved from the Gershwin Room and given a retune. This room also has its own bar and can be used for private functions.

Food up here is fairly simple but no less tasty. You can grab a Moreton Bay bug roll or steak tartare, and there’s a selection of cheeses, too. When drinking, things take a more refined turn than in the rest of the building; there’s a vintage champagne list that could see you dropping in excess of $500 on a 2002 Louis Roederer Brut. It’s not all old world, though. There are some playful modern takes on cocktails, such as the Boilermaker Sour, a whisky sour that brings India pale ale into the mix to create a fragrant citrus aroma. And if you’re feeling a little too unhealthy, a Kale in Comparison might be what you need. It’s got a kale garnish and can be made with booze or without. The whisky list is equally interesting. Scottish favourites can be found next to modern classics, such as the Yamazaki 18-year single malt (though it’ll set you back $115) and Tasmania’s Sullivan’s Cove 16-year-old.

While this is the most luxe spot in the sprawling complex, it retains that tongue-in-cheek playfulness found throughout. It’s an awareness that the Espy is rooted in history, from Alfred Felton to Australian punk-rock band the Cosmic Psychos. The whole operation is designed to give nods to the past while encouraging us to look to the future, but whether it all works as a total package remains to be seen. Once the paint fades past its prefabricated wear and tear and things are stained by someone other than a designer, will this monster still attract the number of people required to pay its bills?

It’s hard to say, and easy to be wary of any revamps of beloved bars, but after poking around the Espy and seeing the overall vision it’s clear a lot of work has gone in to getting it right for everyone.

And when the sun sets, no matter what level you’re on, you’ll have a golden view, a drink in your hand, and music drifting through the air. It’s hard to get more Espy than that.

This article first appeared on Broadsheet on December 3, 2018. Menu items may have changed since publication.