Find all the handheld brekkie classics from the Fitzroy original – including a cheesy stacks-on of hash brown, gooey fried egg and bacon. And if you’re after a hangover cure, add on a Korean pear juice that’s purported to do the job. 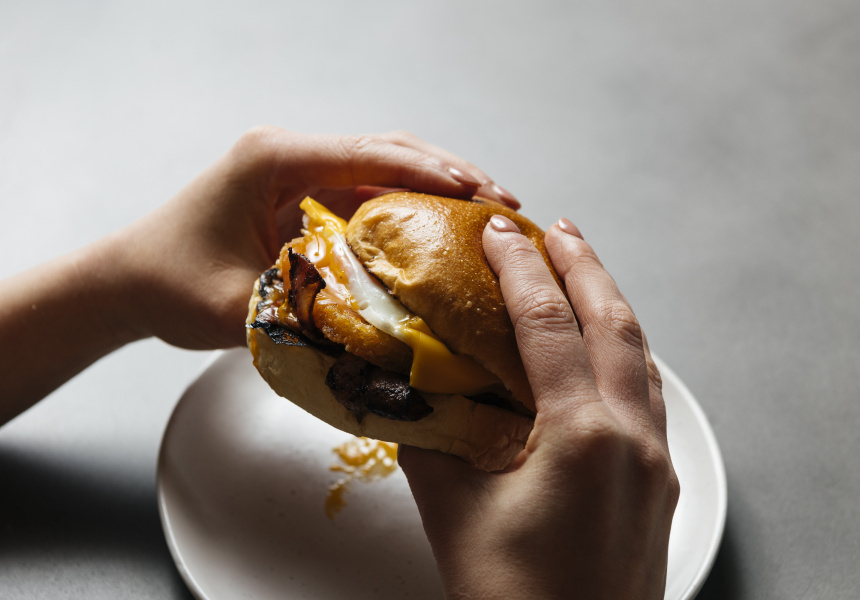 When Greg Papas and Jana Andrianopoulos first opened Egglab in Collingwood in 2017, they always had plans to expand but struggled to find a suitable spot. After nearly four years, a move to Fitzroy and a pandemic, they decided to take the plunge and open a second site.

“We looked for more than a year and couldn’t find the right building, then this corner spot popped up one day and we signed a lease the next,” Papas says. “We’d been craving a corner store with a lot of sunlight, so [it’s] everything we had envisioned.”

It’s a light-filled former kebab shop on the corner of Sydney Road and Albion Street in Brunswick. Outside there’s a takeaway window serving Allpress coffee, with milk crates for perching on. The interior is clean and no-fuss, similar to Egglab’s Johnston Street spot – with metallic finishes, egg-shaped lights and a feature wall designed by Melbourne artist Chico Leong. Benches and bar stools line the street-facing windows while disco music pumps from the speaker system.

The menu has all the soft-and-scrambly and fried-egg-featuring classics Egglab fans will recognise. That includes the “crazy-popular” Potato Head, stacked with a hash brown, a fried egg, bacon, cheese and relish; the Scram with chives, caramelised onion, cheese and house-made chipotle; and the Chilli Scramble with feta, lemony rocket and dill.

For something meatier, there’s a classic cheeseburger or a chicken-schnitzel sanga with dill mayo. Crisp fried sides include potato gems, waffle fries and hash browns.

And if you’re looking for a hangover cure – as tends to happen at places like Egglab – you can smash a Bae Juice with your breakfast sanga. (The Korean pear juice is purported to help with hangovers.)

Papas has already had plenty of requests for vegan menu items, which the team is working on over the coming weeks. He hopes the corner store can become a local staple and says the positive response from the Brunswick community has been overwhelming.

“We launched during lockdown … because we wanted to ease into a soft opening,” he says. “But it’s been the opposite – we’ve sold out every day so far! Seeing so many people come down for some food and a coffee has … been a perfect start.”

Melbourne is currently in lockdown. Masks are mandated in public spaces, public gatherings are banned and minimal social contact is recommended. If you have concerns about visiting businesses or public spaces, or questions about self-isolation or coronavirus testing, check out the latest updates from the Department of Health and Human Services.