From the Eau de Vie and Mjølner Crew, Nick & Nora’s Opens This Week – Here’s What We’re Looking Forward To

There’ll be champagne towers, lobster brioche buns, fancy tinned seafood, and room for 240 in an art deco-inspired space. But this is a team known for its state-of-the-art cocktails – and there’s no shortage of those, with a 33-strong list. After a tough few months for its owners and staff, cocktail bar Nick & Nora’s is days away from launch.

Nick & Nora’s is equally anticipated. It’s by The Speakeasy Group (Mjølner, Eau de Vie, Boilermaker House) and is an offshoot of the Sydney bar of the same name.

Inspired by the 1930s crime novel The Thin Man – and the series of Hollywood films that followed – the bar is named after its lead characters, Nick and Nora Charles.

“They’re a crime-fighting, married duo who are extremely witty, drink a lot of booze and solve crime. It’s just an exciting inspiration to base a venue around,” Speakeasy Group co-owner Greg Sanderson tells Broadsheet of the name inspiration. “The idea is that when you walk through the doors, it’s like being invited to a cocktail party at their house.”

Here’s what we’re looking forward to when this glitzy newcomer opens on Thursday.

A space that’s part 1930s, part modern-day
While inspiration for the grand, 240-person space comes from a bygone era, it still feels fresh. Head up the entry stairwell – with a lead skylight overhead – into the first-floor venue, where you’re greeted by a five-metre-long hallway lined with more than 400 bottles of champagne in a climate-controlled display.

Once you’re in the bar itself, the art deco ambience is strong, with black-and-white tiled floors, a tiled geometric fish-scale pattern behind the bar, an emerald-green marble bar top, geometric pendant lights and peach-hued couches. Stained-glass Tiffany lamps bring a soft glow.

“We wanted the art deco flourishes, but without making it feel like there’s too much,” Sanderson says. “You’re not going to walk in here and feel like it’s the Empire State Building.”

Sipping clever cocktails from a group known for its mixed drinks
Eau de Vie and Mjolner are both known for state-of-the-art cocktails, so you can expect the same here. The 33-strong list has sections inspired by fictional characters, from femme fatales (Martinis), to snitches (sours and bitters).

There are also four-person punches; all made with champagne. One combines rum, amaro Montenegro, pineapple and yuzu; another is flavoured with blackcurrant and earl grey.

There are also sweet cocktails, tropical drinks and non-alcoholic concoctions, some with elements of theatre – think flames and liquid nitrogen.

Getting busy and fizzy with more than 80 champagnes
Champagne is one of the fictional couple’s drinks of choice, so it’s not surprising it’s a focus here.

There are options by the glass spanning “crisp and elegant”, “rich and toasty” and “earthy and savoury”, and you can also order magnums, methuselahs (six-litre bottles), and champagne towers.

But it’s not all fancy French stuff. There’ll also be prosecco from Italy, and local drops including sparkling shiraz from the Adelaide Hills and pet-nat from urban winery Jamsheed in Preston.

“Even though it sounds like a pretty luxe experience – yes, we do have 80 champagnes – you can still come in for a can of beer or a $14 glass of wine,” Sanderson says. “If you want to come in and spend money, you can. But there’s also approachable luxury.”

People-watching from one of three terraces, or from a cosy velvet banquette
The first-floor bar is divided into sections.

Prime spot (in our book) is one of three balconies where you can sit on high stools or couches and people-watch the passers-by on Little Collins or Exhibition Streets from above.

You can also sit at the main bar; in the semi-private cellar; the lounge-y parlour with low seating dotted around coffee tables; or in the salon, which has dining tables and velvet banquettes.

“There are some booths where you can sit and see almost all the action in the entire venue,” Sanderson says.

Fancy tinned seafood and lobster brioche rolls
There are no hot meals or big mains here – all the small plates and canapes on the menu are served cold. 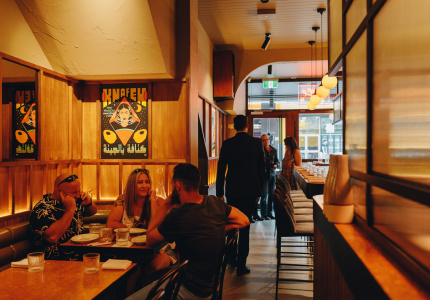