Fancy eating a burger in a rooftop train carriage? 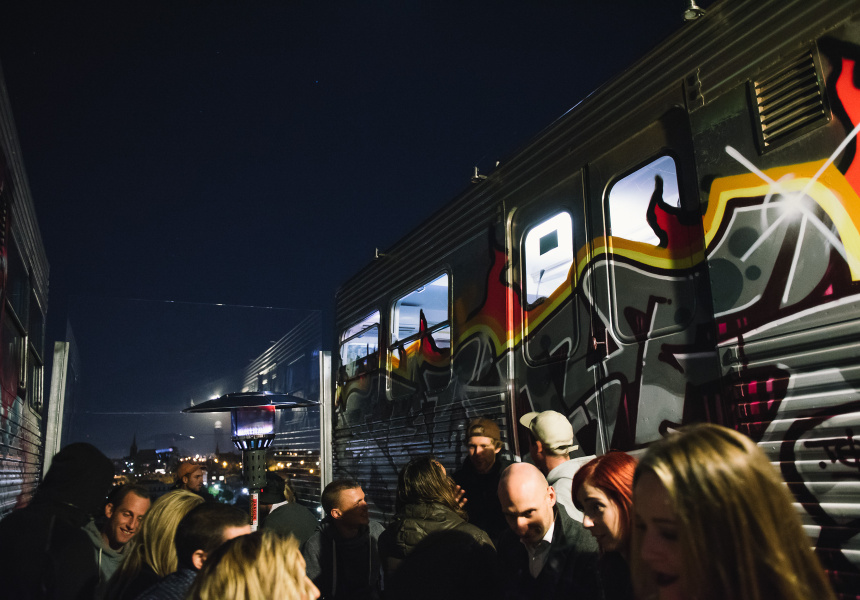 There’s a real sense of anticipation as you ascend the narrow stairs at Easey’s. From the outside, you can see the old-school train carriages fixed to the roof, five storeys up. But nothing can prepare you for the reveal, when you pop up inside the carriage to find rows of original orange and brown train seats, a bar with several beer taps and stunning city views.

The towering venue, owned by Jimmy “Burgers” Hurlston and Jeremy Gaschk, opens from 7am, but apart from good coffee, there’s nothing on the menu that resembles a normal breakfast. First: fried chicken crumbed in Frosties cereal. “When you eat that, the fried-chicken game is changed forever,” Hurlston says.

Second: Easey Cheesy, the signature all-day burger. For a paltry $6, the reward is a ground-beef patty sourced from Peter Bouchier (the cuts are a secret), cheese, onion, mustard, ketchup and McClure’s pickles, imported from Detroit.

Salad, veggies? There are none. Hurlston, the man who spent two years eating, Instagramming and writing a book on burgers, likes them “ruthless”, so the only extras options are bacon or jalapenos.

But amid all this unashamed artery-clogging, there’s also Fare, Jamie Louise Stevenson’s wholefoods cafe which opens next week at the rear of the ground floor. The remaining three floors are given over to seating areas and a clothing pop-up from Nixi Killick. “That’s the way we’ve set it up,” Hurlston says. “It’s a juxtaposition between raw, vegan, epically healthy wholefood and just the complete opposite.”

Customers from either business are free to eat anywhere in the building, which is heavily themed around trains and graffiti, two subjects close to Hurlston and Gaschk’s hearts. Menu prices are printed like train times, for example, while a heap of tables are laminated with rail maps. Walls that aren’t colour-coded with red, yellow and blue (for the old zones one, two and three) are covered in hundreds of tags.

“People see these scrawls on the wall and think it’s disgusting,” Hurlston says. “I understand that, but it’s also where graffiti artists learn their typeface and letter formations. Without a tag, you can’t really do graffiti.”

In six weeks or so, all the tags will be replaced by throw-ups (shaded bubble letters), then later, pieces (larger, more skilful murals) and finally, returned to white. It’s an appropriate arc in a building named End to End, itself a graffiti term for painting a train from top to tail.

Before you rush out to the opening tonight – keep in mind it'll be pretty packed. And if you're hoping to get a seat in one of the coveted train carriages, just know there are only 37 seats up there, so it might be worth waiting for some of the hype to cool off after its anticipated opening weekend.

Easey’s opens for dinner on Friday May 1 from 5pm.