Ever met someone so stupid they don’t even recognise it? There’s a term for it: the Dunning-Kruger effect. Psychologists David Dunning and Justin Kruger coined the phrase in a 1999 academic paper titled, Unskilled and Unaware of It: How Difficulties in Recognizing One's Own Incompetence Lead to Inflated Self-Assessments.

Gene Mills, Courtney Tuul and a bunch of their mates first heard about it on an episode of This American Life. They thought it was hilarious.

“When we first had the idea to open something, it was a big group of us,” Tuul says. "We said, ‘We can do something ourselves!’”

Then they remembered the Dunning Kruger effect – thinking you know what you’re doing, when you really don’t. “It just rang so true for me, this group of ten couples all thinking they know what they’re doing, throwing some money in and opening a bar,” Mills says.

The name stuck, even if most of the group’s initial enthusiasm waned. Now it’s just Mills and Tuul tending the bar, and friends Jeremy Soawyer and Purdy Jane Rhodes as minor partners.

Rhodes is the graphic designer behind the bar’s mountainous logo, which conceals a confidence versus competence graph from Dunning and Kruger’s original study.

It’s the one slick thing about the place, which is otherwise charmingly simple. There’s an eight-seat table, three standing tables, a black brick bar and a few padded banquettes at the front. That’s it.

Less than a month in, the lounge room-size space is already humming with locals. It has an exceptionally personal feel, as Mills and Tuul live out the back and don’t employ anyone yet. If you like Nighthawks, Monty’s or Joe’s Shoe Store, you’ll like this.

Mills’s CV includes stints at Proud Mary, St Ali and bars in Perth and London. He chose every drink on the small but well-rounded list based on personal experience. Pick anything and he’ll explain why he loves it.

Tuul trained as a pastry chef at Proud Mary and later worked with Matt Forbes of Cobb Lane. She bakes at least two sweet, American-style pies every day. On our visit, there was a vegan Blushing Apple Pie made with apple, beetroot and a coconut oil-based crust; and a rustic lemon pie with a butter crust.

“At the best cafes in Melbourne you can always get awesome cakes and stuff,” she says. “But if you don’t want to go to a restaurant, you can’t really go somewhere and have a cocktail and a slice of something, like some sort of dessert.”

The rest of the food is more familiar: olives, smoked almonds, pretzels and cheeseboards from Harper & Blohm. 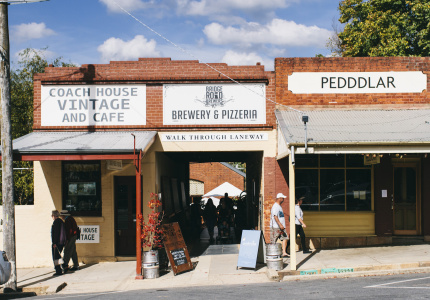