There's an Espresso Martini doughnut on the menu. 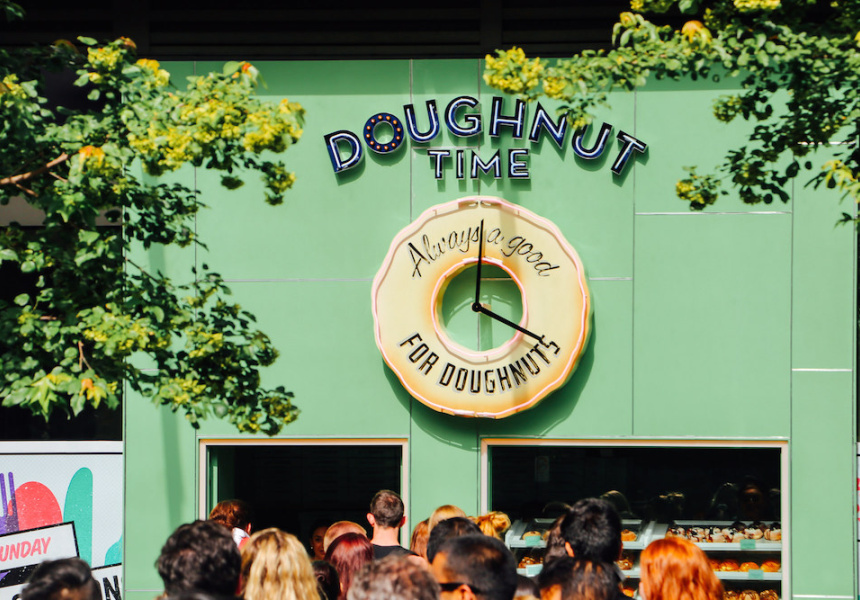 For a while it seemed as though the (sugar) dust from Melbourne’s doughnut boom had settled.

We had Doughboys, Shortstop, Matt Forbes – plus a stack of others that took us two guides to compile. The proverbial hole was filled.

Then Doughnut Time dropped out of the sky. Or technically, Brisbane. It has announced an ambitious expansion of four permanent stores in Melbourne, on top of its 14 existing stores across Australia.

After two pop-ups at Topshop in Prahran and the CBD, the chain will open its first permanent store in Melbourne at 5 Degraves Street. The store will continue its takeaway window model, and will be open until 11pm, seven days a week.

“Our very first store was a hole in the wall in Brisbane, only about a metre wide, similar to an old-fashioned Melbourne cake-shop model. That was the inspiration,” says owner, Damian Griffiths.

From launch day on Wednesday until February 28, the Degraves store will feature a special flavor. The Flinders Treat is a coffee doughnut with a coffee-glaze, cream-cheese frosting and sprinkled with chunks of Espresso Martini Tim Tams and coffee beans.

Doughnut Time will open its second permanent Melbourne store in March, on Brunswick Street, Fitzroy. It also hopes to open in Perth and potentially Tokyo.

Doughnut Time opens this Wednesday February 24, and will offer complimentary doughnuts from 4pm to 6pm.