Roses are red violets are blue, Valentine’s Day is on Monday, what will you do? Here are a few restaurants that have made some romantic plans. There’s some debate over the origins of Valentine’s Day but my favourite interpretation is the story of Saint Valentine, which takes place in Rome, 269AD.

Emperor Claudius II was having a little trouble finding enthusiastic recruits for his army. It turns out Roman men were more lovers than fighters and many were reluctant to leave their wives and families to join the army. So Claudius decided to remove wives and families from the equation by forbidding the act of marriage. Valentine was a priest and, many say, a hopeless romantic. He decided to defy the Emperor and continue to conduct secret marriage ceremonies. When he was discovered, Valentine was imprisoned and on February 14, 270AD he was beheaded.

For his martyrdom and dedication to the cause, Valentine was dubbed the Patron Saint of love and in 498AD Pope Gelasius declared February 14 a day to honour him.

Today Valentine’s Day is celebrated all over the world. Over one billion cards will be exchanged, florists will sell out of red roses and marriage proposals rates will spike. Some see Valentine’s Day as a Hallmark holiday, the result of rampant commercialism. But underneath all the hype it’s a day to celebrate and appreciate those we love. Because there really is nothing more beautiful than the concept of true love – except maybe a seven-course degustation menu at Press Club.

Here are a few things going on that you might get you in the romantic spirit:

Press Club
The Press Club team say the Hellenes love and eat like there are no more days in their years. Their Valentine’s Day Menu is designed to inspire you to do exactly the same thing. Think rolled quail, peach chutney, shallot tart and walnut dressing or best end of lamb, baby courgettes, garlic puree, wild olive and tomato just to get your taste buds warmed up. All dishes served with complementing wines.

Stokehouse
This stylish little beach shack lends itself perfectly to Valentine’s Day. Imagine the sun setting over Port Phillip Bay, palm trees swaying gently in the breeze, champagne bottles popping. This is the stuff of romance novels. A modern Australian, Mediterranean-inspired degustation menu from chef Anthony Mussara will help distract you from the idealistic setting. Wine is deliberately kept separate, allowing you to stick to one bottle; or let sommelier Lincoln Reilley help select matching wines.

$130 a head plus cocktail or champagne on arrival.

The Millswyn
The food is French Brasserie and the interior is Nordic inspired – what could be more romantic? How about a six-course tasting menu that has not one but two desserts: a pre dessert of vanilla pannacotta with raspberry jelly, followed by the grand finale: Les Dessers du Millswyn: chocolate tart, peanut butter ice cream sandwich and raspberry ripple ice cream. Sweets for your sweetheart.

$120 a head plus free glass of Pol Roger on arrival.

Pandora’s Box
Give in to your curiosity this Valentine’s Day and take a peek inside Pandora’s Box. This chic warehouse space in the back streets of Windsor only recently opened but already has people talking. Like most places, they will be serving the chef’s tasting menu on February 14. The menu is predominantly Mediterranean, with some Spanish influences. Think Crystal Bay prawns with kritharaki and toasted corn, or duck leg jamon with pickled quince. For something more substantial try scallop carpaccio over lemon risotto or rabbit stew. 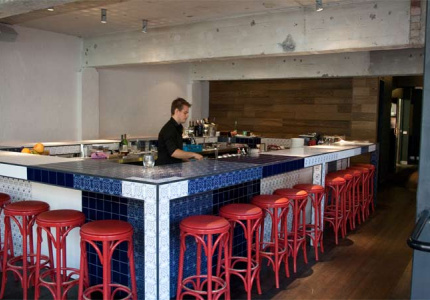