The owners of the South Melbourne cafe are selling up and moving to the city with new venture, Sun Moth Canteen and Bar. Luke Mutton and Kylie Mackinlay have sold Dead Man Espresso, the business they started five years ago, and will open a new venue in the CBD, Sun Moth Canteen and Bar. It follows the sale of Common Galaxia, their design-conscious cafe in Seddon, this time last year.

Like in Melbourne in general, there’s been a growing passion for craft beers and natural wines among the ranks at Dead Man. This led Mutton and barista Jackson Duxbury to begin searching North Melbourne for a spot on which to build a bar. When that proved fruitless, the duo trained their sights on the CBD, and found the space in Niagara Lane.

“It's a magical site; the kind of iconic Melbourne spot I've been after for years and years,” Mutton says of the space that has exposed brick and old timber columns. It has one unfortunate flaw, though: neighbours. Planning objections quickly stamped out any potential for a bar.

At breakfast, this ethos will be represented by muesli, granola, porridge and eggs. “Every morning I eat bircher or granola, but I’m sick of cafes just having one,” Mutton says. “I want to have six or seven of those grain- and seed-type dishes.”

Later in the day, stews, soups and hearty salads will be backed by the aforementioned craft beers and natural wines. The 90-seater will be the sort of place, Mutton says, where you can come with six friends and get fast, over-the-counter service.

In a year, Mutton and Mackinlay will follow up with another business in the CBD; Big Gay Bec's Food Store. Their chef from Dead Man Espresso, Rebecca Kaye, will head that operation, which will offer, “what you'd expect from a country general store – jams, relishes, pickles, granolas.”

Sun Moth Canteen and Bar will open in late November. 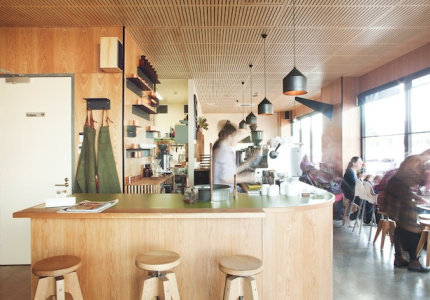