A Cycling Hub and Cafe in a Converted North Melbourne Warehouse

Caffeinate while updating your cycle kit at this minimally-designed new shop. 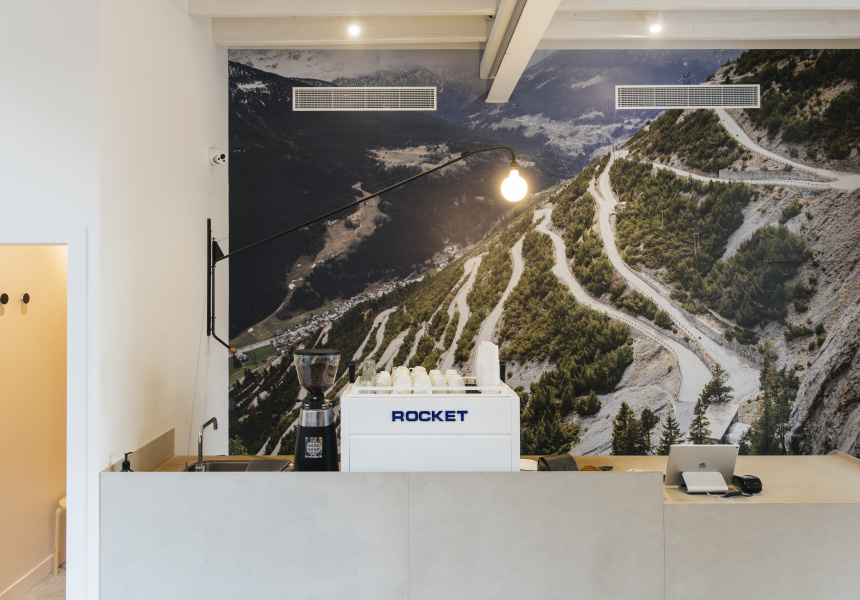 Melbourne-based cycling gear and accessories label MAAP’s new digs feel more like a small cafe than the headquarters of a major road-cycling brand.

The converted warehouse, tucked away in a North Melbourne side street, has exposed beams above and polished concrete below, giving the narrow room a spacious vibe.

A Rocket espresso machine sits atop a slate-grey counter, and a massive print – showing a winding hill climb in Northern Italy titled La Strada di Cancano (The Road to Cancano) – looms behind the barista. It was shot by photographer Jeff Curtes for MAAP’s 2015 winter collection. At the back of the shop, a communal table is flooded with natural light from above, with potted plants alongside it.

Co-owner Oliver Cousins called on his sister Clare, an award-winning architect and president of the Australian Institute of Architects, to help create the right aesthetic.

“The brand has always been really colourful and really graphic, so we wanted a pretty minimal space that let the garments speak for themselves,” Cousins says. “At the same time, we also wanted a functional space that cyclists could use, hang out at and socialise in.”

Orchestrated rides start and end at the store most weekends, and the store has racks to hang bikes up after a trip.

MAAP’s core products are jerseys and bibs for road cyclists, either for training or racing, and all are made using breathable, moisture-wicking performance fabric. Pieces are designed around different racing styles and environments, from all-mesh jerseys for summer, to more aerodynamic fabrics for racing, to garments made for cooler climates.

The food offering is simple; a handful of croissants, danishes, and doughnuts delivered daily by Cobb Lane to restore lost energy after a big ride. And there’s great coffee from Proud Mary.

Cousins launched MAAP in 2014 after spending 12 years working as a freelance designer for brands including Stussy, Mambo and Globe. At the latter he met co-owner Jarrad Smith, and they bonded over surfing and cycling. The pair teamed up and started MAAP, wanting to translate their love of cycling to well-made gear.

“Once you jump in head first with cycling, you clip into your pedals and you’re looking for kit to wear,” Cousins says. “For me, it was hard to find something out there that suited our sensibilities.”

The duo hired streetwear designer Misha Glisovic, former owner and designer at Schwipe (a company with some notoriety in Melbourne for designs such as its “Islam is OK!” shirt), as creative director. Four years later, MAAP has added nine more staff, and has warehouses in the Netherlands and Utah as well as Melbourne.

Cousins and Smith also use the shop for Q&As with cycling personalities and product launches, but even if you have no interest in cycling, it’s a lovely spot to linger over pastries and coffee.

This article first appeared on Broadsheet on October 4, 2018. Items may have changed since publication.