Just when it seemed there was a food truck or mobile kitchen for any kind of snack you might desire, we found Dr Marty’s Crumpets - buttered and hot off the pan. 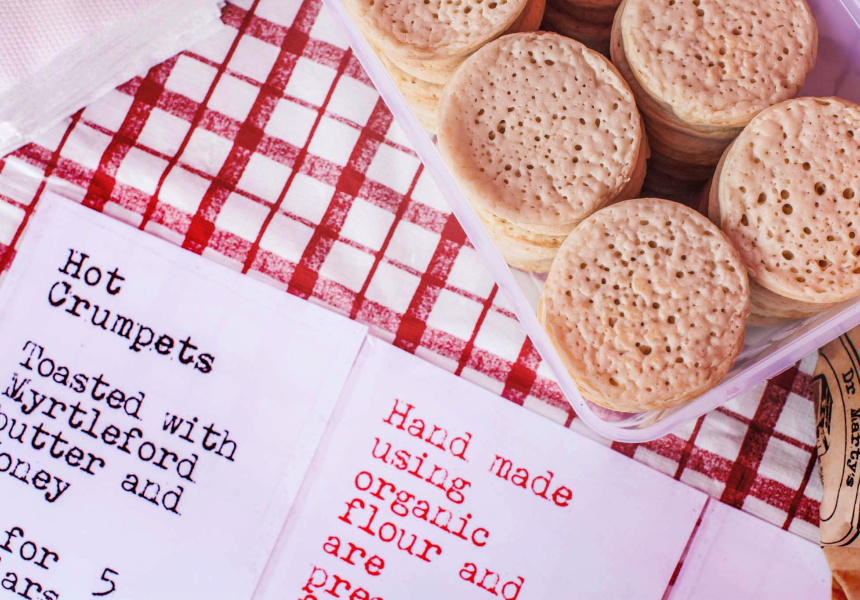 The decidedly Anglo-Saxon crumpet has long been difficult to come by, should you ever find yourself wanting something a little more special than the humble supermarket variety.

Recognising the niche in the market, Martin Beck has set up a mobile shop at farmers’ markets across town, selling his very own variety under the name of Dr Marty’s Crumpets.

A chef by trade, prior to taking on crumpets full-time, Beck worked for the likes of Frank Camorra at MoVida and the Grossi family pre-Florentino days. He first started cooking up these bubbly treats when he worked at cafe A Shop Called Milton on Greville Street. After encouragement from his friends, colleagues and wife, Beck set up his one-man crumpet show.

“After 20 years working in restaurants, I needed a change,” he says. “I was good at crumpets and it was something new.”

So, where to pick yourself up some Dr Marty’s Crumpets? They’re available at farmers’ markets such as those in Fairfield, Coburg and Woodend a few times each month. Beck lets people know via his Twitter and Facebook pages where he’ll be setting up his red crumpet tent next. We hear that his crumpets will also available at MoVida Bakery in South Yarra in coming weeks.

Crumpets are $7.50 for a bag of six to take home, or $5 for two toasted on the spot by the man himself, served with butter and honey or jam.

When asked what his favourite crumpet topping is, Beck suggests enjoying them over two courses: Vegemite followed by a nice marmalade.