A Craft Beer Event in Support of Asylum Seekers

If Sun Moth Canteen had it its way, all craft beer would have notes of benevolence and exude a philanthropic aroma. Introducing the Salted Caramel Macadamia Imperial Brown Ale, by Sun Moth Canteen & Bar co-owners Luke Mutton, Kylie Mackinlay and Jackson Duxbury and the team at Kaiju! Beer. This craft brew exists only in a single keg. It’s barrel-aged over four months and comes in at a hefty 7.5 per cent ABV (alcohol by volume). Better get this one while it’s hot – or cold, rather.

On Tuesday October 6, Sun Moth Canteen will serve the specially brewed beer as part of its regular Tuesday “Cheap Beer But Good Beer” night. Mutton and Mackinlay are hoping to smash the keg out in one night. Via an online fundraiser started by Duchess of Spotswood co-owner, Bobby Green, the proceeds will be split equally between three charities working to support refugees and asylum seekers.

“As a bit of a bleeding heart like myself, Bobby had already started a fundraiser,” Mutton says. “We decided to donate the funds raised through the sale of our beer to her cause, and hopefully bring her closer to her $10,000 goal.” All money raised will be split between the Asylum Seeker Resource Centre in Melbourne, West Welcome Wagon and Migrant Offshore Aid Station. Kaiju! is doing its part to help, donating the $450 it would normally charge for the keg to Green’s campaign.

“My wife and I have always had a social conscience,” Mutton says. “Whether it’s the environment or social justice, we’re always banging on about something and thinking of ways in which we can help. When we came up with the idea for this fundraiser, we’d just brewed a one-off keg with Kaiju! and wanted to do something with it.”

“Working in the hospitality industry, you speak with people from all walks of life. This is something that is ingrained in our attitudes towards other people. These three organisations are at the front line right now, and we should be doing more to help.”

The Salted Caramel Macadamia Imperial Brown Ale can be enjoyed at Sun Moth Canteen & Bar from 4pm on Tuesday October 6. 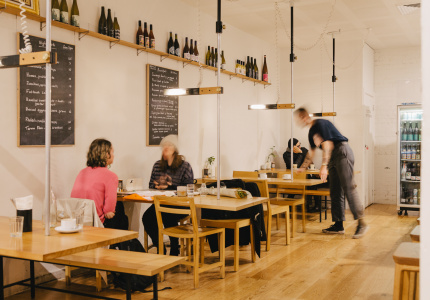