The former Longrain chef has traded his kitchen to travel between the country and city, bringing the best produce of the Hawkesbury region to the best chefs in Sydney. We took the journey with him in the all new BMW X1. 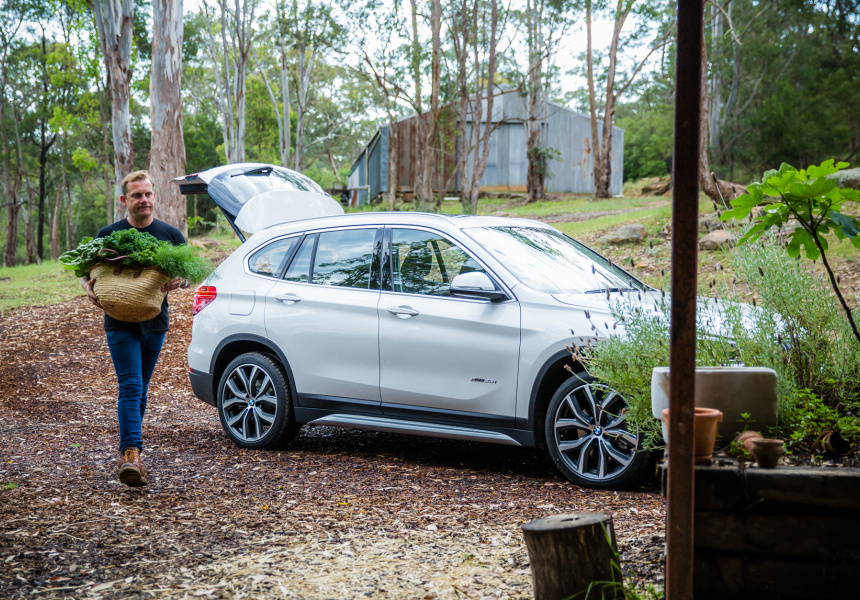 After 14 years as executive chef of Longrain Sydney and Melbourne, Martin Boetz wanted to shake things up with a new adventure. When he first visited this 28-acre patch of land in Sackville, an hour’s drive northwest of Sydney, he didn’t know what he was looking for.

Fast forward three years, and with wet bark underfoot and a sea eagle screeching overhead, we’re making our way to the spot that first spirited Martin Boetz away from the city to a life off the beaten track. A magnificent view of the Hawkesbury River emerges: framed by eucalyptus trees, with water stretching out for miles, disturbed only by the car ferry that crosses it day and night.

Sold on the view and its sense of space, he bought the land to build a property, and soon installed a garden. The idea for a new business clicked when he saw the abundance and quality of the produce that grew here.

That business is Cooks Co-Op, an operation that sees Boetz and his team both grow and source the finest Hawkesbury region produce and deliver in person to over 25 of Sydney’s best cafes and restaurants. The long and growing list includes Icebergs, A Tavola Bondi, Chiswick, Coogee Pavilion, Four in Hand, Three Blue Ducks, Movida and Pilu at Freshwater. What separates this from a normal providore operation is “the idea of a chef gathering produce for other chefs,” says Boetz.

From the lookout point, we hop in the BMW X1 and drive down to the garden, past bees making honey, to see what’s in season. There’s red and green curly kale, rainbow chard, beans broad and butter, asparagus, sage, fennel and parsley. Summer herbs will soon be planted too, Boetz tells us as he picks his selection to take to the city.

His close relationship with nearby farmers and producers ensures their best quality produce is saved for him and his clients. In the mix today are school prawns trawled sustainably from the sandy riverbed; zucchini flowers and goat’s curd from neighbours; aged apple cider vinegar from Bilpin and olive oil from from Mudgee (from which Boetz makes his own blends).

As the BMW X1 smoothly transitions us from the old dirt roads of the farm towards the city, Boetz explains the context of the Hawkesbury as a food-growing region. “It was where the first settlement of Sydney grew all of their produce, sending it back by ship to Sydney Central. It’s always been a great food growing area because a lot of it is flood plains, so the soil is very fertile.”

Once in Sydney, we drop in to Sagra in Darlinghurst for lunch. Boetz catches up with head chef Nigel Ward before a delicious selection of antipasti and secondi is served. It includes Cooks Co-Op zucchini flowers, new-season asparagus and broad beans that have been delivered just days before.

For Ward, the quality of Cooks Co-Op produce lends itself perfectly to his ever-changing menu and the philosophy of Sagra. “If Marty’s got it on his list it means it’s growing in Sydney, which means it’s perfectly seasonal,” he says. “I like to strip things away from the plate as much as possible and let the ingredients shine, and that’s very easy to do with his produce. The stuff that looks tired everywhere else looks so alive at the Cooks Co-Op. It’s like nose-to-tail for vegetables.”

Another advocate is chef and restaurateur Colin Fassnidge who, having trained with Raymond Blanc, has long made nose-to-tail the focus of his menus. We make the short drive from Sagra to Fassnidge’s Four in Hand restaurant in Paddington to deliver produce and prepare an impromptu dish. Half of Four in Hand’s ingredients come from the Cooks Co-Op, including the olive oil and the school prawns we’re cooking up today. “If a good product comes up and we like it, we’ll use it,” he says simply, of his approach to menu design.

From here, Boetz heads back to the Hawkesbury, driving through farmland that is increasingly being turned over to grow chip-friendly potatoes and turf. By highlighting the quality and versatility of produce available on Sydney’s doorstep, Boetz is bucking the trend. For Fassnidge, this signals a new movement in farming. “A younger crowd is coming back to modernise it,” he says. “And farmers – like chefs – are starting to get a more starring role.”