A Conversation Over Tea

A tea expert, a coffee roaster, a chef and a wine maker travel to Sri Lanka to see organic tea being produced. What happens next could be the future of food. 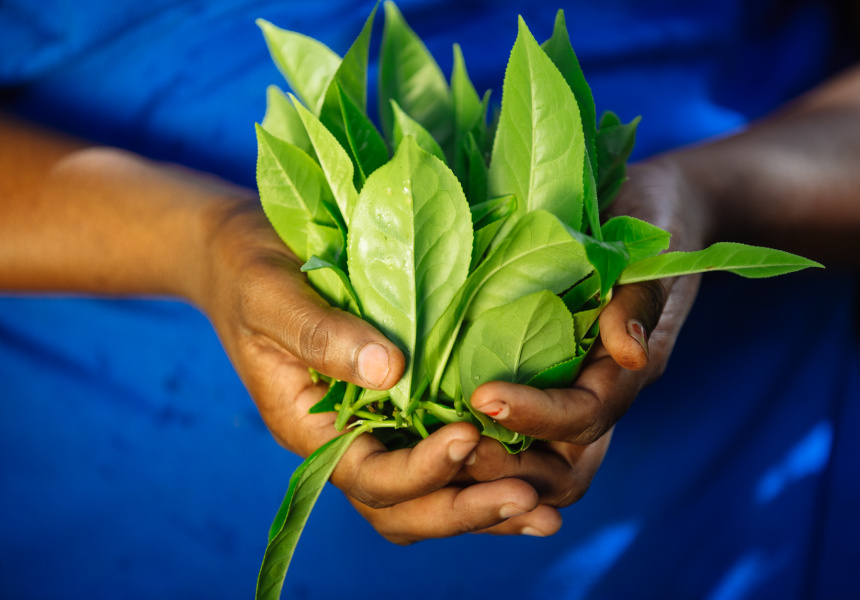 “Creativity and innovation comes when you bring great minds together,” says Nathan Wakeford, a tea specialist from Somage Fine Foods. He has been behind some of the biggest steps in the speciality-tea movement in Sydney, Melbourne and around the world. Inspired by hospitality professionals who are known for focusing on organic production, Wakeford organised a trip to an organic tea plantation for chef David Moyle of Hobart restaurant Franklin, natural and biodynamic wine maker, Patrick Sullivan and specialty coffee roaster, Nolan Hirte of Melbourne’s Proud Mary.

The group spent several days exploring the Ahinsa organic tea estate in Morawaka, southern Sri Lanka. They hiked up mountainous tea fields to appreciate both the growing conditions of the tea and the environments workers harvest in, and were guided through the estate to see first-hand the organic principles, companion planting and natural biodiversity of the farm. They toured the tea production factory to learn about the processing of tea from withering through to fermenting, rolling, firing and grading. They swam in the natural waterfall of the estate, battled leeches in the undergrowth, shared meals cooked by estate workers and cupped different teas to appreciate further the nuances of production. But the most telling parts of the trip were the discussions that came about when the group saw similarities with their own disciplines – from farming challenges to chemical processes.

“It’s amazing to see the cross-over,” says Sullivan. “Being able to see somebody in Sri Lanka looking to achieve a similar thing to what I’m looking to achieve in sustainable farming, and seeing similarities across all the disciplines, whether it’s wine or food or coffee, or manufacturing something from the ground.” Sullivan was particularly interested in the variety of the produce on the estate and the natural methods of dealing with crop blight.

“I love seeing the diversity in what is growing amongst the tea. It’s not just tea; it’s a full-functioning system with communities involved. It’s about life. Where as in Australia, agriculture is much more of an economic, singular thing," says Sullivan. "So it’s refreshing to see a community-based system."

From jackfruit on the tree, to medicinal herbs, local greens and wild turmeric roots, Moyle took his pick of local produce to prepare some of the shared meals with. “Being taken out of your environment and placed into a new one is always inspiring,” says Moyle. “Especially with our hosts and the way they have gone about the agriculture, maintaining their grounds and the biodiversity on the land. It allowed me to see different ingredients growing.”

Despite the differences in produce and discipline, each of the group was committed to the idea that the best outcome is achieved when the origins of the produce are respected – an idea that was reinforced by the organic production of the tea. “I don’t try to chase exotic ingredients [at home], it’s just not relevant to where I am, but it’s always good to see things that are completely different in their own environment,” says the chef.

“I’m always looking for an opportunity to celebrate what coffee is,” says Hirte of his own philosophy. “I want to show people what it can be, I don’t want to bastardise it or make it something it’s not, I want to keep it as pure as possible. It’s exactly what Patrick is doing with his wine, what David is doing in the restaurant and what they’re interested in it at the tea estate. Stripping it all back to show terroir, character and varietal.”

Discussions included suggested adjustments to the withering and drying of the tea at the factory, the importance of setting standards in an industry (along with the willingness to break those standards when they hold an industry back), proposed experiments to round out the flavour of cold-brew coffee, the significance of standing up for what you believe in for food production and a plan to bring the team back together for future dinners showcasing these ideas. “No one wants to reinvent the wheel,” says Hirte. “So if we can share what we know and what we’ve come across in our own industries, then that’s a good thing.”

The variety of ideas discussed and the willingness of the participants to apply the lessons they learned is testament to Wakeford’s goal: opening different fields to each other to share knowledge and to inspire a meaningful conversation about food production, from farm to final outcome, all over a good cup of tea.