Confessions of a Cafe Leech, or: How I Learned to Stop Worrying and Use a Cafe as My Office

What’s the actual cost of endlessly sitting on your laptop in a cafe? Ryan Shelton does the maths. And it ain’t pretty. 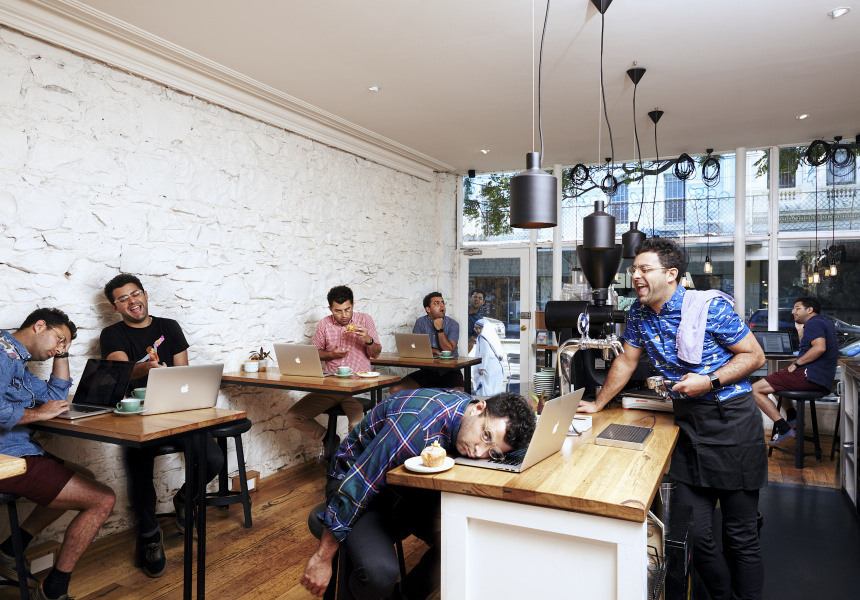 “They hate me. They want me to leave. They’re spitting in my single-origin.”

These are the anxiety-ridden thoughts of a “Cafe Leech”. That’s my just-coined term for someone who regularly uses a cafe as their primary workplace, leeching table space and wi-fi for minimal monetary outlay.

It hasn’t been a problem thus far (I don’t think). But who knows how long this generosity from the AWTMC (Alliance of White-Tiled Melbourne Cafes) will last. I mean, why should these lovely cafe owners have to grin and bear my particular working habits? What’s in it for them?

I spend about $10 per cafe-leeching visit. That number’s based on ordering a few coffees and the occasional lunch or snack. Considering I frequent my regular cafe about three times a week and stay for about four hours each time, I’m spending an average of $2.50 an hour. And when you multiply that by 12 hours, it becomes painfully clear that I’m only spending a measly $30 a week.

Full disclosure: I’m regretting this article. And I know it gets even worse.

At Archie’s All Day in Fitzroy (one of my most common leeching grounds), I’m told their normal non-leeching customer spends an average of $30 per visit and, along with their dining partner, stays for about an hour. That’s $60 an hour, for a table of two.

One could then argue that because I usually occupy a table of two all by myself (remember: $2.50 an hour), my presence alone is actually costing Archie’s $57.50 an hour to harbour my cafe-leeching ways. If I stay for my regular four-hour stint, I’m then costing them a total of $230 a day or $690 for my three visits a week. And that’s just the cost of one leech.

But save some of that disapproving head shaking for this next statistic – it’s quite possibly the last nail in my caffin (cafe coffin).

Over the past year, based on the above numbers, it’s conceivable to say that I’ve cost Archie’s a total of $35,880 – almost the average annual salary of a full-time Melbourne barista. Or, to put it in more clickbait-friendly terms: I’m single-handedly raising the rate of Australian unemployment and encouraging a generation of dole-bludging hipsters. Click!

But wait … surely I’m not saying that cafes should ban leeching altogether. Am I? After all, it is an option. A pretty good option if … oh, I dunno… IF YOU HATE THE MOST POPULAR CINEMA AND LITERATURE OF THE PAST CENTURY.

Ladies and gentlemen of the internet, allow me to elaborate a little (more). Did you know that iconic screenwriter Quentin Tarantino wrote the majority of Pulp Fiction at LA restaurant Barney’s Beanery? Leech! How about that J K Rowling wrote the first Harry Potter book at a small teahouse called The Elephant House in Edinburgh? Leech! Or that David Lynch wrote Blue Velvet at Bob’s Big Boy in Burbank. Lynch!

You: Hang on, Ryan. Are you saying that the simple furtherance of arts and culture completely makes up for the loss of one barista’s financial livelihood?
Me: Yes. But I don’t run a small business. So back to the numbers, I guess.

In 1993, J K Rowling spent approximately three years at the aforementioned Elephant House writing a manuscript for Harry Potter. Using my personal leeching habits as an example, this would equate to a loss of $107,640 of potential Elephant House profit, or three full-time barista jobs.

I know what you’re thinking: That J K Rowling sure is a selfish bitch!

Well, what if I told you that in 1997, that selfish bitch’s wizard book became the fastest-selling novel in history, going on to launch a series of follow-up books that have now sold more than 450 million copies worldwide, making the Elephant House the most famous cafe in Edinburgh? What would you say then, huh? HUH?

And what about the thousands of jobs created by the film adaptations. Or the nannies, gardeners, chefs and pool cleaners hired at J K’s mansion. Who’s the “selfish bitch” now, huh? Shame on you.

Now, I’m certainly not suggesting that I’m sitting here in this cafe writing the next Harry Potter. But maybe this girl next to me is. Or maybe that guy in the corner will start it after he gets off Facebook?

All I know for sure is I need Cafe Leeching. If I were banned I’d never be able to write an article like this. That, I can guarantee.