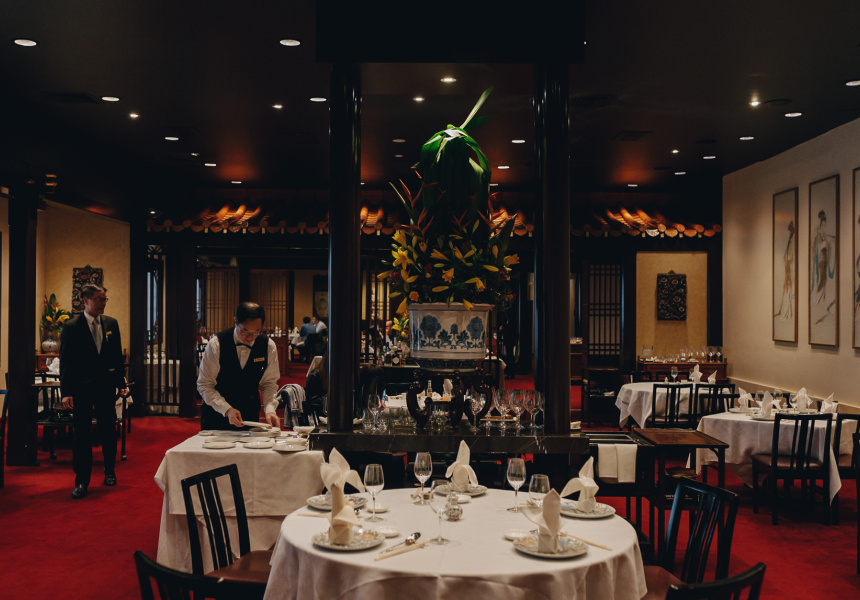 Part of the charm of Flower Drum, the iconic Cantonese fine diner on Market Lane in Chinatown, is its timelessness. But, after more than 40 years, permanent change is afoot at the Melbourne institution.

Next month, it’s unveiling a new addition. The lift will open into a brand-new bar, designed for diners who arrive early for their reservation, who want to kick on after their meal, or who just want a few small plates with a good glass of red.

“It’s been playing on my mind for quite some time, and obviously last year I had quite some time to think about it,” general manager Jason Lui – son of executive chef Anthony Lui – tells Broadsheet.

Inspiration for the space comes from his last trip to Hong Kong, where he visited fine diners, five- and six-star hotels, and their adjoining restaurants and bars. “I drew elements from there,” says Lui.

The restaurant’s deep-red and jade-green hues, brass accents and soft-touch fabrics will also be seen around the bar; it’s more an extension of the existing space rather than a completely new venue. But Lui says some elements will be distinctly separate.

While details are scarce, expect small plates that go well with booze, such as dumplings and spring rolls; a list of bespoke cocktails; and premium wines by the bottle and by the glass.

“I’m excited but nervous at the same time. It’s a pretty big departure but the response has been fantastic,” Lui says. “We’re looking forward to having people in there and seeing them have a good time.”

Flower Drum’s bar is slated to open in early May.