The Moonee Ponds store is being transformed by the team behind The Ascot Lot. When it opens in April, expect trivia nights and pinball machines, street-food snacks (such as sticky lemongrass chicken) and plenty of local beers and natural wine. 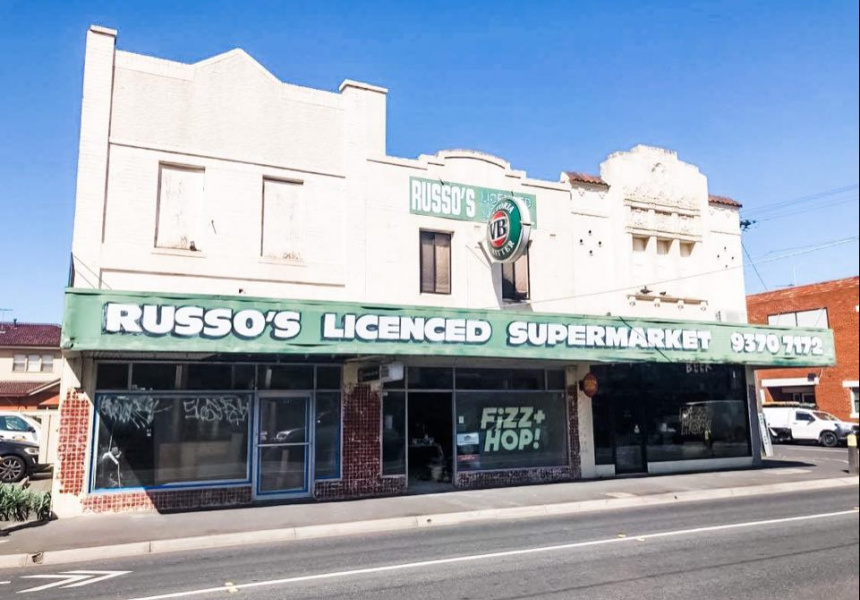 When Antonia Russo put a “for lease” sticker up at Russo’s in Moonee Ponds, it was the end of an era for the neighbourhood supermarket, deli and bottle shop that had operated for more than 50 years on Holmes Road.

At the same time, David Bartl, Jacob Bettio and Lachlan Taylor of food-truck park The Ascot Lot were looking to open their next venue.

“We decided to give Antonia a call and from there, it all happened fairly quickly,” Bartl tells Broadsheet. Russo’s closed in July last year and the boys have been renovating the 500-square-metre space ever since. “It was pretty run-down, there were mouldy walls and the ceilings were collapsing. A huge amount of effort has gone into [it].”

In April, the old supermarket will reopen as Holmes Hall, a 400-person restaurant and bar. The team has added retro elements that nod to the space’s old life while still keeping the space fairly polished. Original brickwork and concrete flooring are offset by bright-red tiles along the exterior, velvet upholstery and indoor plants.

“Every single day we’ve been renovating, people are still popping in looking for Russo’s and telling us different stories about it. It was here for 50 years and is so iconic for the area, [so] we wanted to leave elements that link back to its heritage,” says Bartl.

Chef Angus Adams (who trained at Vue de Monde) will be making dishes that draw on street-food and snacks from across the globe, such as Thai sticky chicken with lemongrass caramel and a lime-y coleslaw; salt cod croquettes with lemon aioli; patatas bravas with smoky cherry tomato sauce; charcuterie platters (there are vegan options too); and poached pineapple with coconut ice-cream.

“[Adams] describes it as ‘Melbourne street food’, in that it’s food from around the world, and given how multicultural Melbourne is,” Bartl says. “His whole idea is to make it a social space where food is meant to be shared.”

The cocktail list is still being crafted, but there’ll be rotating beers across 20 taps; tinnies from independent Melbourne breweries (such as CoConspirators and Tallboy & Moose) and international brewers (such as New Zealand’s Garage Project); and a focus on locally produced natural wine. You can also grab takeaway drinks from Fizz & Hop, the trio’s existing bar and bottle shop, which is next door.

As at The Ascot Lot, there’ll be trivia nights and themed events. There’ll also be pinball machines, shuffleboard and other games throughout the space.

“At The Lot people just naturally find themselves talking to strangers, and there’s a community feel to the venue,” Bartl says. “We want there to be something new to try every time you come along.”