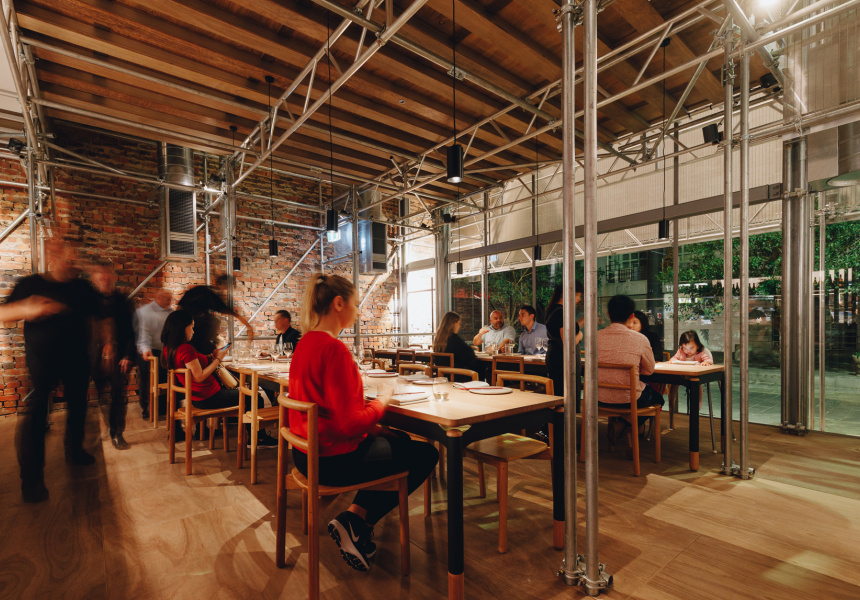 But this five-month-old restaurant in Melbourne’s CBD takes the flavours and spices of Asia’s Sunda region – a catch-all that includes Indonesia, Malaysia, Singapore and other nations attached to the tectonic plate of the same name – and remixes them as thoughtful, nuanced, high-definition dishes that elegantly refute the notion that Southeast Asian food is – quote-unquote – “cheap”. For anyone across the pleasures of garlic, ginger, chilli and other hawker centre hallmarks, eating at Sunda feels like growing up with a worn, VHS copy of Star Wars and then rewatching it for the first time on Blu-ray.

Take the pie tee, a snack consisting of crisp thimbles of pastry filled with a savoury vegetable mix, which is commonplace throughout the Sunda region and goes by different names and spellings. None of the versions I’ve tried over the years have sported tart shells as dainty as Sunda’s barely-there rendition, nor were they filled with an addictive one-two of chawanmushi-style egg custard and chilli. You’ll pay as much for a single pie tee here as you would for a plate of them at most hawker centres, but the level of kitchen care is a cut above. The discovery that otak otak – usually a pandan-wrapped parcel of grilled fish paste – can be a just-set, parfait-like slab of deeply crabby curry is going to hurt, too.

From the stark, communal timber tables set with proper napkins, elegant chopsticks and neatly typed, single-sheet menus, to the space’s building site-inspired look – scaffolding and all – Sunda refuses to buy in to Asian restaurant stereotypes. It's not the first to do this – Longrain is a few steps away, and Gingerboy a few blocks – but it arguably elevates the genre beyond what we've seen before.

Khanh Nguyen, Sunda’s 27-year-old chef, is a Sydney transplant with a CV starring some of that city’s top chefs and restaurants, including: Brent Savage at the Bentley group of restaurants; Dan Hong and his modern Chinese diner Mr Wong; and the Noma Australia pop-up. The Vietnamese-Australian brings with him burnished technique, a strong DIY ethic and a burning desire to advance the local Southeast Asian food discussion.

His approach to tempeh is just one example. The fermented soybean cake, and villain of so many on-again, off-again vegetarian romances, is rarely as satisfying as when sliced and deep-fried till golden and showered with crisp banana flower and a tamarind and palm sugar caramel. This serving method, it would seem, is native to 18 Punch Lane, as is the restaurant’s modern aesthetic.

Not that every dish is a game changer. Connoisseurs of Asian flatbreads know that the perfect roti prata is crisp, golden and flaky: Sunda’s version comes up short on the last element of the trifecta. (The accompanying hillock of vegemite-spiked curry, though, is one of Nguyen’s more convincing arguments for Australasian cooking experiments).

The kitchen also makes its own flat rice noodles. Commonly eaten in Malaysia and Singapore as char kway teow and in Thailand as pad thai (both are wok-fried noodle dishes), here, they might be served as part of a special comprising raw prawns and their grilled heads, which sounded better than it tasted. The noodles’ dry, rigid texture suggest the chefs’ energies are better directed elsewhere.

Dessert goes beyond the cut-fruit usually found at the end of a Lazy Susan hit-out. There’s the jasmine rice cream with precision-cut fruit. It’s elegant, perfumed, fleet-footed and precisely the opposite of the rich, nutmeg-spiked rice puds of British origin. Diners seeking the warming comfort of the latter may be disappointed. On the flipside, I can’t imagine anyone feeling let down by the bika ambon, a dense, milk-tea coloured cake made with fermented tapioca. A speciality of the Indonesian city of Medan, the cake is best described as a sweet Asian crumpet, only a thousand times more satisfying. As someone that grew up eating bika ambon, I’m surprised it doesn’t get the same airtime other desserts do. Once you taste Sunda’s version you’ll probably feel the same.

When Sunda owner Adipoetra Halim was searching for a site for the restaurant, I don’t think opening so close to Chinatown was intentional. Nonetheless, Sunda’s Punch Lane address and community of neighbours offers intriguing context to its life’s work. Here’s an operation offering guests a wine list filled with the new-wave and spice-sympathetic, its contents chosen with food pairing rather than price points in mind. Service is engaged and engaging with staff able to answer food questions without missing a beat.

Sunda might be a package with more than a scent of the familiar, but attention-to-detail and a focus on both present and past denotes it as one of this year’s openings of note, and worthy of Melbourne’s attention.