Country and city, deliciousness and virtue, doing-it-yourself and supporting the community: this winery restaurant is a masterclass in balance. 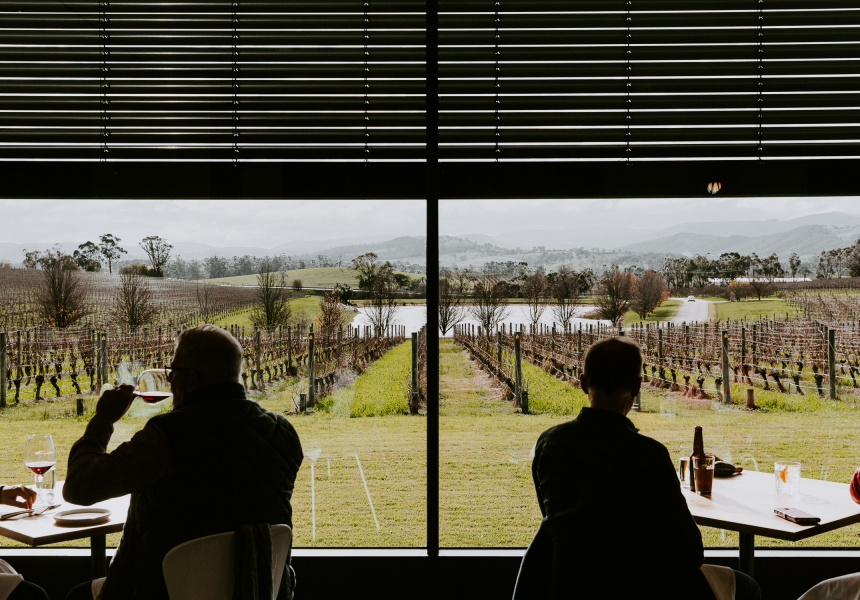 It’s hard to have a bad time at this sharply designed cellar door in the Yarra Valley. Those widescreen panoramas of the vineyard and the Coldstream landscape beyond? Welcome to Victorian wine country. Pre-lunch wine tasting with cellar door staff and estate wines, both teeming with personality? Essential, even just to sneak a taste of cellar door-only wines such as the super-smashable pinot meunier, a relative of the better-known pinot noir. Whether you’re talking about the wine, the food or the views, Oakridge is all about showing off the local region and its bounty.

Jo Barrett and Matt Stone, co-head chefs of the estate’s restaurant, mightn’t have been at Oakridge Wines when it was established in the late ’70s, but they’re an integral part of its present and future. She grew up in Melbourne and always wanted to be a chef. He grew up in Western Australia’s Margaret River region and was a gifted cricketer. The couple met while cooking in Melbourne in 2011 and took over the restaurant at Oakridge four years ago, inheriting the joint from Jacques Reymond alum Jose Chavez, who’s now at Turning Point in Ripponlea.

According to Barrett and Stone, the first year was “really hard”. They wrestled with seven-day trading, and staff and diners had to get their heads around the Barrett-Stone approach to seasonal ingredients and supporting local farmers. Eventually the restaurant began closing two days a week (a game changer, Barrett says). Oakridge circa 2019 is a prime example of a contemporary Australian restaurant that’s in tune with both its region and what’s happening in wider dining circles, starting with a keen interest in DIY.

When I first dined here three years ago, I ate prosciutto made from pigs raised on acorns in the Grampians. This winter I had my first taste of house-made smallgoods including streaky, paper-y capocollo and salami flavoured in the southern Italian way, with fermented chilli and wild fennel.

Lush burrata curd made using milk from Little Yarra Dairy – a one-man, 12-cow operation owned by Tyrone Brown, chiropractor during the week and cow whisperer on weekends – was another highlight of that first visit. Brown still supplies Oakridge with milk, but the kitchen now also turns it into a ripe brie served with crackers made from leftover bread, a resourceful and delicious anti-waste measure.

While these examples illustrate how much a kitchen and its black book of local supplier names can grow in three years, many of Oakridge’s more inspiring initiatives are less visible. The milk, for instance, travels from dairy to restaurant via plastic buckets that are washed and reused, the property treats its own wastewater and composts its own cardboard, and flour is milled on-site.

Things grown on the property, meanwhile, continue to assert more influence on the menu, from crunchy and peppery brassica leaves plucked from the kitchen garden during the colder months, to summertime fruits and veg. Passionfruit vines and random herb patches have been established along random stretches of fence and in other sunny nooks throughout the property. The estate is even trialling growing its own wheat.

Admittedly, not every restaurant has as much arable land as Oakridge, but looking closely at waste streams and supply chains and the way they can work with one another is something every operator should be doing. Cynical eaters, though, will be relieved to hear lunch here is more about deliciousness than preaching.

Lesser-seen proteins are something of a house specialty. They’re not just on the menu for shock value, but are thoughtful contributions to the how-do-we-feed-the-planet-in-the-future? discussion.

Turkey often feels – and tastes – like a chore. But Oakridge’s turkey sausage and confit wing duo from last spring could really do wonders for the image of this Christmas staple. There’s also the crocodile toast, a remix of that suburban Chinese restaurant classic: prawn toast. It’s made with crocodile cheek meat and ramped up with a house-made XO sauce.

The strike rate with more familiar meats is a touch shaky, though. While tartare seasoned with green ants is a fond beefy memory, fat fingers of dry-aged tenderloin cut from the chateaubriand of a retired dairy cow were too wildly beefy for me. But if this is the future of steak – and many experts believe eating smaller quantities of better-raised meat is the only real way forward – perhaps it’s on me to shift my tastes and expectations.

Kangaroo loin with native citrus? Fine, if a little colour-by-numbers mod-Oz. A more compelling use for those precious jewels of native lime, though, is using them to crown a parfait flavoured with spent oranges from local distiller Four Pillars. This is yet another instance of how Oakridge works with local suppliers to resourcefully – and deliciously – rep the Yarra Valley.

Oakridge is that rare beast that nails the balance between so many things. Country charm and big-city thinking, deliciousness and virtue, and doing things yourself while supporting producers. Hit the road, take your time with lunch, and bring some thoughtful eating and drinking ideas (plus new vintages of Yarra Valley chardonnay) home with you.

This story originally appeared in print issue 27. Menu items may have changed since publication.