After working as a patisserie chef for four years in Paris, Andrea Reiss was inspired to open her own 'pastry lab' here in Melbourne. 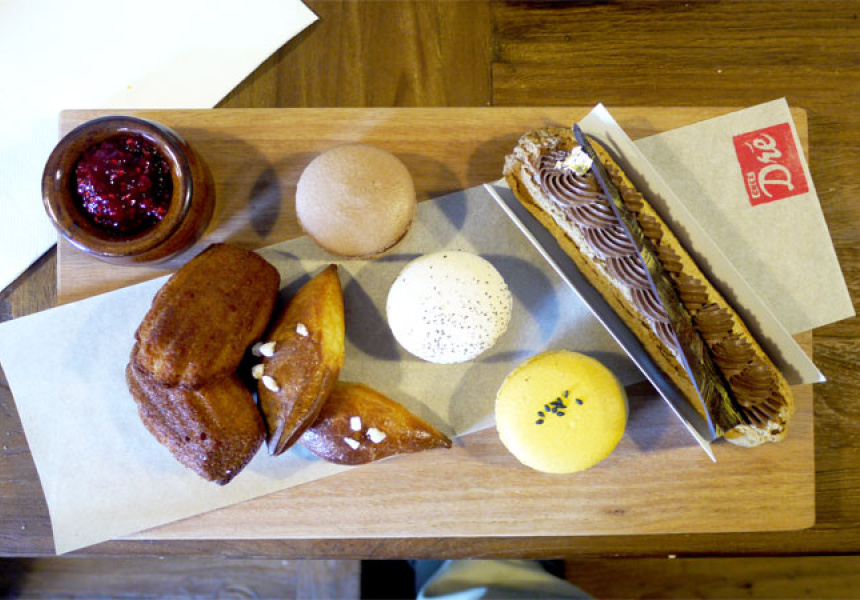 Not far from the hustle and bustle of South Melbourne Market, down an inconspicuous-looking alley, there has been a lot of commotion happening over the past few months. Andrea Reiss (Dre) and business partner Steve Sam, assisted by an eager team of family, friends and professionals, have been working tirelessly to transform an empty warehouse into a patisserie and boulangerie named Chez Dre.

While there are fresh baguettes and other savouries on offer, make sure you leave room for dessert – the focus is definitely on the sweets at Chez Dre. A pastry cabinet is filled with tarts, madeleines, gateaux and macarons that have been made in-house in the open kitchen.

Last Friday, Broadsheet had the opportunity to sit down with Dre and Steve at the patisserie’s soft opening to chat about their new project. “The key here is to keep things quite simple," explains Steve. "We’ll have classic, simple food and hopefully have the chance to be a little bit more creative as we go along."

When asked what she is most excited about, Dre quickly mentions bringing sweets and pastries to the public. After working as a patisserie chef for four years in Paris, and London prior to that, Dre was inspired to open her own 'pastry lab' here in Melbourne; a place to experiment with different flavours and textures to achieve a delicate balance while still maintaining the treats’ traditional appeal. But “It’s all about not taking it too seriously,” she says.

This sentiment is evident in the design of the cafe too. While it is a large converted warehouse, the space feels warm and inviting rather than industrial. A blue, curved wall borders the kitchen and the concrete floor has been sprayed with a bright red pattern. ‘Originally we planned to operate as a production place only, but when we realised what an amazing location and space this was, we just had to turn it into a cafe,” Dre says.