Cherry Bar Opens a New Chapter, With a Fresh Space and the Return of Standing-Room Shows

Earlier this year the iconic rock’n’roll venue moved to a new site, gaining a 24-hour liquor license and room for an extra 40 punters. But it’ll be a while yet before the bar can really make use of these new perks. For now it’s sticking to two shows a night, limited to 50 tickets. We’re just glad it’s back. 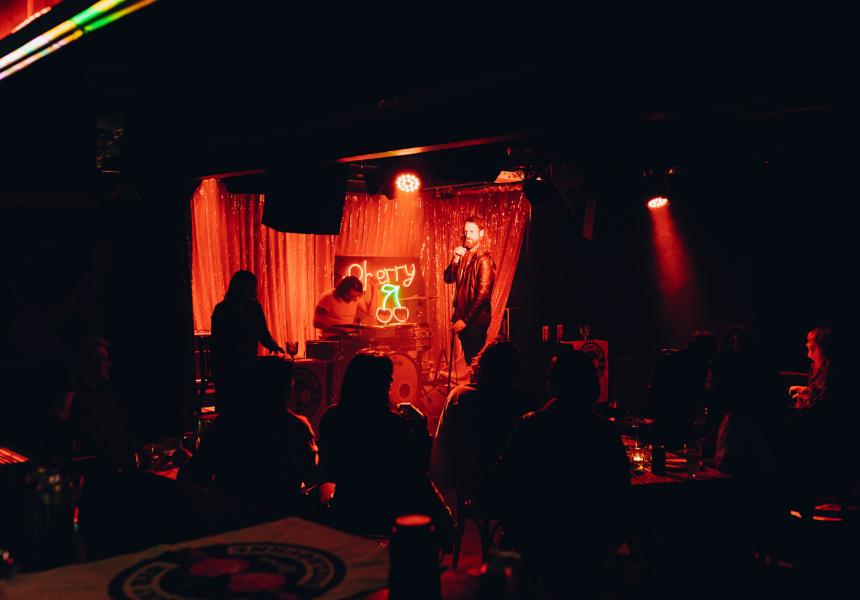 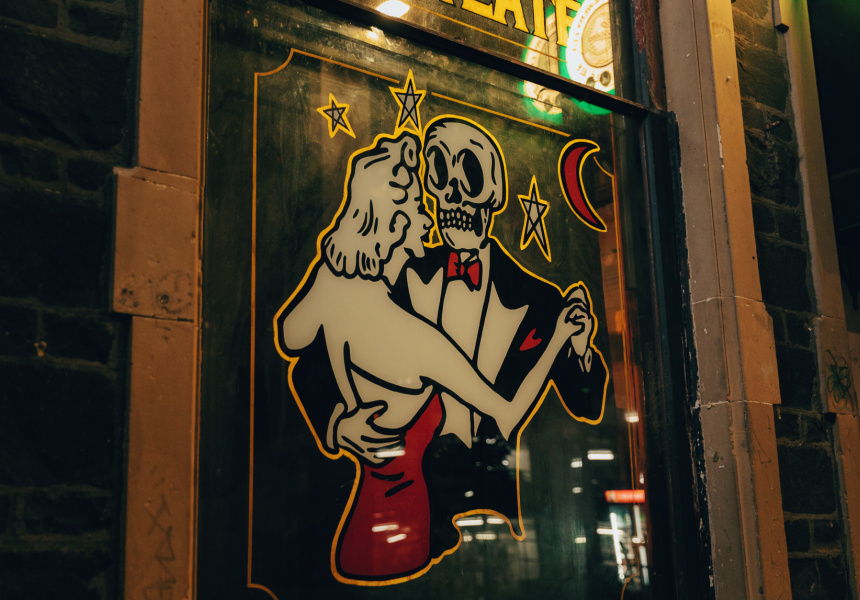 “That line that ‘we’re all in this together’ is fucking bullshit – if there’s one thing that’s true about this virus, some people have been stomped on the head, and others haven’t been touched,” says Cherry Bar’s James Young. “Live venues were the first venues to shut and we’re likely to be the last to open.”

Young, who’s owned the bar since 2006, laid these words on me back in June, just a couple of weeks before Melbourne entered lockdown number two. Six months on, they’ve lost none of their force. Even as the rest of the city continues to open up, bars and live-music spaces without kitchens, like Cherry, are at a disadvantage.

The iconic rock’n’roll venue left its original home on AC/DC Lane midyear and moved into the former Boney/Pony space on Little Collins Street. The new digs should be familiar to the old faithful: the wooden panels, leopard print couches and horseshoe-shaped booths made the move along with Young, apparently much to the confusion of international rockers, who may not realise they’re no longer in the original bar. The two-storey space has a comforting dank, as if it were 3am all the time.

The stage is upstairs, while the downstairs bar and parlour are populated with booths, nooks and rock regalia. Importantly, the new building has increased Cherry’s capacity from 200 to 260. The liquor license, a legacy item attached to the building, permits service 24 hours a day, seven days a week. The place is primed for a rowdiness that can’t exist just yet.

“You’ve got this big semi-trailer truck called live music that’s just parked in the garage doing nothing, and the government’s invited us to get it back on the road just in first gear,” he says. “And I think it’s important to get the truck back on the road in first gear, because then you grow artist confidence, punter confidence and most importantly government confidence, and that’ll give us the chance to change up the gears. I think we’ll get to the destination everyone wants sooner by showing our responsibility.”

Until recently, shows in the bandroom were seated, with a maximum of 40 punters spaced out to an acceptable social distance. A $99 ticket for what Young affectionately calls “dive bar cabaret” bought punters a meal from Flinders Lane Italian restaurant Tazio, three cocktails and a Cherry Bar tea towel.

But with restrictions eased on December 7, standing shows are back. Bands will play to two separate crowds of 50 people every Friday and Saturday night from 8pm and 10pm, with tickets starting at $10. A DJ will take over from 11pm until 3am, with plans to extend opening hours soon.

Before the pandemic, Cherry was building its roster of regular music nights, including Country and Western Wednesdays, Soul Thursdays and a Sunday afternoon of Cherry Blues, which will return in mid-January. Regular transmission is obviously on hold, but Young’s cautious optimism sometimes gives way to genuine excitement for a future of live music which is (hopefully) just around the corner.

“With the exception of international travel, I expect us to return to normal within two to three months. And it’s almost like a sci-fi story. It’s like a rock’n’roll party version of Escape to New York, where the whole world is going to pieces and the virus is taking control, but you know that if you can afford to fly to Australia, if you’re willing to do the two-week quarantine, then you can just join the party. After two weeks in quarantine they’d be bursting out like Usain Bolt, saying ‘Where’s Cherry Bar?’”