The final piece of the elaborate 80 Collins puzzle has a kaleidoscopic, futuristic fit-out that revolves around the open, charcoal-fired kitchen. It’ll be turning out smoky Wagyu skewers, big bowls of udon and mashup desserts like the “Yaki-kult” ice-cream sanga. Bookings for Yakimono – and its shoot-for-the-sky sibling Society – are open today. November 5 will be huge for 80 Collins.

Not only is Chris Lucas reopening his shoot-for-the-sky flagship Society, which we had less than a week to experience before lockdown 6.0 – he’s also laying the final piece of the elaborate 80 Collins puzzle by opening his two-level, charcoal-fired Japanese diner, Yakimono, next door.

Though the team at the top will look a little different. Last month, chef Martin Benn and maitre d’ Vicki Wild – who Lucas lured to Melbourne from celebrated Sydney fine diner Sepia – announced they had parted ways with Lucas Restaurants five days after Society’s opening.

The show goes on, though. Drawing inspiration from Tokyo’s late-night izakayas – and Lucas’s affinity for Japan, where he lived for several years – expect a space that’s all at once kaleidoscopic, futuristic and has, we’re told, “a touch of Blade Runner 2049”.

Yaki means “grill” in Japanese, so traditional cooking-over-charcoal methods will dominate the offering. Everything will revolve around the sprawling open kitchen, helmed by chef Daniel Wilson, giving diners a front-row seat to the flame-grilling action. (Wilson was behind the acclaimed, now-closed Fitzroy diner Huxtable and its spin-off burger joint Huxtaburger.)

On sticks you’ll find Wagyu intercostal (the meat in-between the ribs) glazed with smoky soy, and shitake doused in ponzu and yuzu oil. While larger dishes will include smoked-eel udon with shimeji mushrooms and an onsen egg, and whole miso-glazed chicken, dusted with charcoal salt, alongside smoked-chicken-fat rice and spicy slaw.

Among the meal-enders: a mochi waffle with hazelnut buttercream and salted-macadamia praline, and an ice-cream sandwich with “Yaki-kult” and raspberry.

Yakimono is set to open at 80 Collins Street, Melbourne on November 5, in line the reopening of Society. Book online. 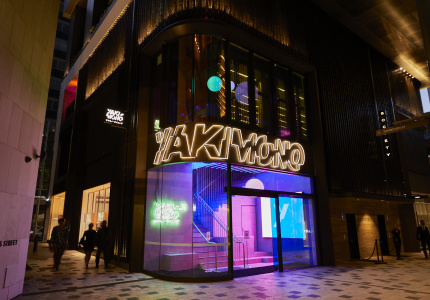 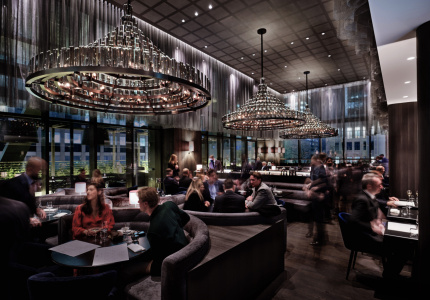