The volunteer-run sister cafe to the CBD’s Kinfolk has a mostly vegetarian menu that uses produce from friends’ farms, and it donates 100 per cent of its profits to charity. Walking into Sibling, you can’t help but be drawn to the triptych under black arches that stretches across the back wall. Each panel is filled with a large botanical print. The fit-out of the space, formerly cafe Arkwright & Co, is the work of Christina Bozsan of Boarch architecture and interior stylist Luna Black. The arch also frames the kitchen pass, where chef Zane Heemi (Neighbourhood Wine, Grub Food Van, Bluebonnet Barbecue) is plating up dishes for a menu that’s around 80 per cent vegetarian and 50 per cent vegan.

“A lot of it is gluten free, or can be,” adds Heemi. “I’m cooking food from some friends’ farms. It’s all pretty local and we have minimal wastage as well. We’ve been doing some interesting experiments lately, making coffee kombucha with the old coffee grounds.”

One of those farms is Day's Walk in Keilor, named because it’d take about a day to walk there from the CBD. Produce from the farm goes into a daily tart, and a Chinese broccoli dish that comes with a spicy, nutty tofu scramble, served with a bao bun. Arepas (Venezuelan-Colombian maize pancakes) come topped with avocado and mojo verde (a salsa made using coriander). And goat, farmed, slaughtered and delivered by Farmer Joe in Echuca, is slow-roasted and served with rainbow chard and labneh.

Coffee is from Small Batch Roasting Co, and there are vegan truffles and cakes from Citizen Cacao – but menu aside, Sibling is more than an everyday cafe.

Like sister eatery Kinfolk, the staff here is made up of volunteers, including people experiencing mental health issues, those with physical or learning disabilities, migrants and refugees, people transitioning from prison or long-term unemployment, and students. Working at Sibling provides them with work experience and training, but it also connects people to their community, which can help relieve social isolation.

The concept is by co-founder Jarrod Briffa, who says all distributable profit (net profit after funds are set aside for short-term business expenses) is donated to charities including the Cathy Freeman Foundation and the Asylum Seeker Resource Centre. Briffa says this adds up to more than $180,000 over the past eight years.

“When we started [Kinfolk] in 2010, it was really a social experiment to see whether we could shift the way people use philanthropy,” Briffa says. “Kinfolk became a platform for people who were facing challenges of social inclusion.”

Since then, around 700 volunteers have contributed to the operation, and with a long waitlist of potential volunteers looking for opportunities, it was time to expand. The new spot will allow the team to double the size of its volunteer program over the next two years.

This article first appeared on Broadsheet on February 14, 2019. Menu items may have changed since publication. 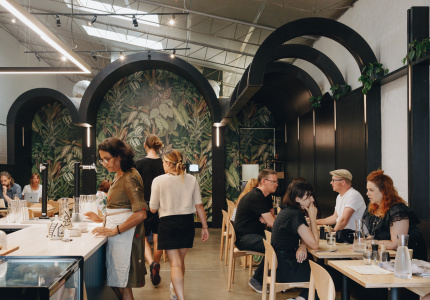