A Career Without Short Cuts 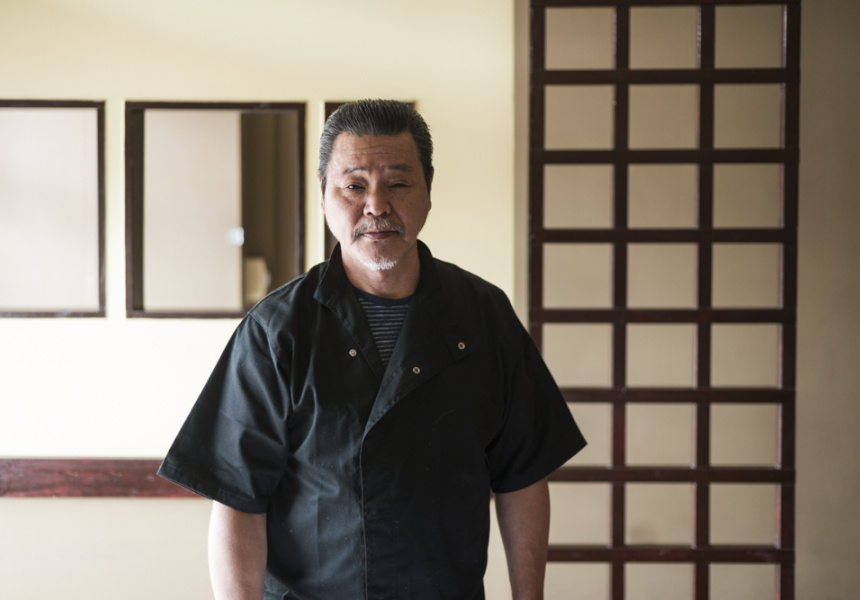 Hiro Nishikura’s reputation precedes him. He’s one of Australia’s true sushi masters, with a trademark pompadour hair and infamously strict instructions for diners who wish to take a seat at his Glen Waverley sushi bar, Shira Nui. Yet as he deftly butterflies prawns with a flick of his yanagiba knife, he seems almost serene.

“Sashimi is not so difficult,” he explains, not pausing his work to speak, “You have to have a good knife, a good sharp knife.”

As he proceeds to cut paper-thin slices of cucumber with flicks of the blade, it becomes clear not only the knife makes the chef. Now aged 60, Nishikura-san has honed his craft for more than four decades.

His career began in Fukuoka, where he undertook his apprenticeship for ten years. “In Fukuoka City, I have to be waking up about three o'clock in the morning,” Nishikura-san recalls.

After a trip to the market, he’d prep before the kitchen staff arrived. “Only after that time can I sleep, from maybe 9am to 11am," he motions to the cramped space under the sushi bar where he used to nap.

He’d work straight through lunch and dinner, finishing well after midnight. “Then I am going to again market, so only one hour, maybe two hours sleeping a day. Very tough."

It would’ve required a dedication that seems almost unfathomable today, but Nishikura-san says it was just what was expected. "We get off day, only once a month. That was normal in Japan."

When he began his apprenticeship at age 16, despite a year's experience as a ship's cook, Nishikura-san found himself at the foot of the ladder, entrusted only with washing rice. As the years passed he slowly progressed, learning one skill at a time, from making dashi stock, to cutting vegetables and cooking tamagoyaki.

“Everything was done slowly then,” his wife Suzy chimes in, moving about the quiet restaurant to set tables for lunch. “If it took you 15 hours in the day to learn something, that's what you did."

It took four years before his head chef invited Nishikura-san to learn the art of sashimi. "You could only watch, like this," he recalls, assuming the role of apprentice, gingerly peering over onto the cutting board. "Then slowly, slowly I start to do.”

After 10 years as an apprentice, Nishikura-san came to Australia in the 80s for his first job as a fully-fledged chef, but it wasn't exactly what he'd imagined. "Australian people, when I came here they didn't like fish much. Only they can eat the California roll,” he recalls.

There must have been a time, through his years of struggle in Japan and Australia, when he wanted to pack it in? Nishikura-san looks over to Suzy for translation, his face breaking into a smile when he realises what’s being asked, “Oh! Of course!”

"Why people were working hard is because they are thinking about their shop. 'One day, I will have my own shop'”.

As the years passed, Australia's palate refined, and Nishikura-san’s career grew. In 2002, with a reputation as a sushi master, he opened his own shop with Suzy, Shira Nui.

Tucked away in a nondescript strip of shops in suburban Glen Waverley, the popular restaurant is evidence that Nishikura-san’s unwavering dedication has paid off. And now, he has his own apprentices.

One emerges from back-of-house, gingerly placing a huge makiyakinabe pan onto the counter.

“Tamago-egg,” Nishikura-san explains, motioning towards the tray with his slender knife in hand. The sweet, folded omelet is a deceptively difficult dish, which apprentices spend months learning to make.

"Still not so good," he pronounces, judging the apprentice's progress once they’ve disappeared back into the kitchen.

Whether it takes two years or ten, there’s growth in every career and HOSTPLUS are with you every step of the way. Download your Digital Member Card so it’s easy to take your super with you.