A stalwart restaurateur, a gonzo trip into the world of shaved legs and lycra, a whisky cocktail that will cure your cold and more. Pick up a copy today. 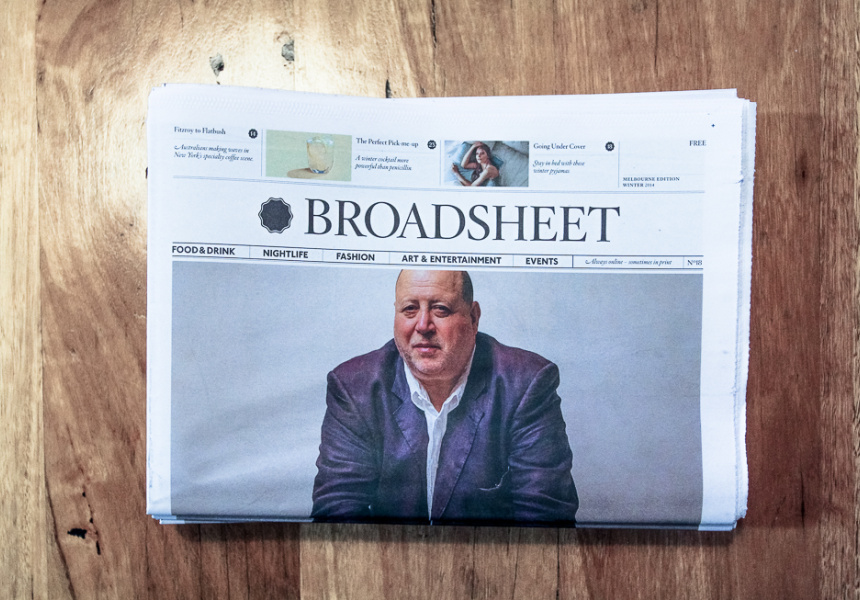 You’ll notice that on the cover of Broadsheet’s new winter print issue for 2014 there’s no eager, young coffee gun. No star of tomorrow on the cusp of breaking through. Instead, we feature a man who’s run the same restaurant for a quarter of a century.

Ronnie Di Stasio is a journalist’s dream. A divisive, fascinating character; he’s a big man with an intimidating presence, impulsive yet generous and part of the fabric of Melbourne hospitality.

Di Stasio’s story also ties into a question we ask ourselves: how do you keep relevant in a city that moves so quickly?

Elsewhere in this issue, we spend time in another iconic Melbourne restaurant. France Soir has just opened its precious wine cellar, making an extraordinary collection of more than 3000 bottles of France’s finest available to the public.

The couple behind eateries Horn Please and Babu Ji, Jessi and Jennifer Singh, is pushing Indian cuisine beyond folded white napkins and familiar curry menus to a creative and playful place. And way at the top, Vue de Monde chef Shannon Bennett is entering a new phase in his career, casting his eyes to the Dandenongs where he is rolling out an ambitious, large-scale project for all walks of life to enjoy – not just an elite few.

Sometimes in Melbourne, the greatest challenge isn’t just getting a foot in the door – but keeping it there.

Speaking of ambitious, our own Max Olijynk goes gonzo by donning lycra, shaving his legs and taking on an epic 300-kilometre bike ride over two days to get under the skin of the MAMIL (Middle Aged Men – and women – In Lycra).

We look into the new wave of Australians heading to New York to make specialty coffee, meet up-and-coming designer Elissa McGowan, get into bed for a winter pyjamas fashion shoot and whip up a whisky cocktail that won’t just warm you up - it might cure your cold too.

We hope you enjoy the issue.