Bringing Back the Good Times

When did bars get so serious? These new Melbourne night spots are championing the rowdy vibes that made going out fun in the first place. We love drinking in this city – you can find anything from blaring nightclubs that scramble your eardrums to tiny cocktail bars hidden in the most unexpected places.

Sometimes we want something in between. A place where you feel at ease enough to talk shit with the bartender or the stranger along the bar and, when it gets late, dance with your friends until last call. What’s more – somewhere the drinks are consistently excellent.

To us, the following new Melbourne bars (all of them opened in 2015) fit that description and we think you’ll like them too.

Cherry-red neon, pool table, excellent pre-batched cocktails (that means no waiting around), and the strains of Queen’s I Want to Break Free on the jukebox. What’s not to love about this bar? Without skipping on the elite quality we’ve come to expect from sister bar The Everleigh, Heartbreaker takes care of the booze with little fuss, so you can get on with enjoying your own good time.
234A Russell Street, Melbourne

Fitted out like a ’70s log cabin, this backstreets South Yarra bar features a living room with orange vinyl furniture, a retro TV tuned to static and a DJ spinning anything from classic rock to New York disco. Coopers and Brooklyn Lager are on tap. Food by Nick Stanton includes a rotisserie chicken packed with cheeseburger stuffing that will keep you going until 3am (the impromptu living-room dance party kicks into gear well before then).
3 Wilson Street, South Yarra

Pretty much as soon as you walk into this skinny Chinatown bar and find yourself staring down a portrait of Bill Murray, you know what kind of bar this is. The music is generally ‘90s hip-hop, the bar staff looks like it couldn’t be having more fun and the new cocktail list is excellent and not without a sense of humour: the Breakfast in New Orleans comes topped with Froot Loops.
13 Heffernan Lane, Melbourne

Steve Costa and Kyle Bush (New Guernica, Chuckle Park and Chuckle Deli) aren’t quite ready to give up on dance music. But nor do they want to stand in a nightclub for hours on end, drinking awful beer. Joey Smalls is their inspired solution. There’s music every day, but Fridays and Saturdays are when house, hip-hop and disco vinyls spin endlessly out back. Oh, and there’s a 3am license.
284 Sydney Road, Brunswick

You can bring your own vinyl to Lulie Street Tavern. That one fact tells you everything you need to know about this back-to-basics local, where the peanuts are free and pizza comes from Rita’s, across the road. Play darts while you eat and enjoy the festive, everyone-knows-everyone sort of vibe.
Rear of 288 Johnston Street, Abbotsford (entrance on Lulie Street)

Jason Chan (of West Winds Gin) has opened a frat bar, complete with a hat collection, pinball machine and neon Zoolander quote on the wall. There’s a solid catalogue of beers and the booze library is pretty sophisticated: 150 bourbons and ryes on the back bar, a house-made fizzy Negroni, and espresso martinis on tap. But before you can get carried away with all that cleverness, a cheesy Phil Collins track brings you back to the dive. So does the fried chicken (even if it’s been brined in buttermilk). Just go with it.
78 Cecil Street, South Melbourne 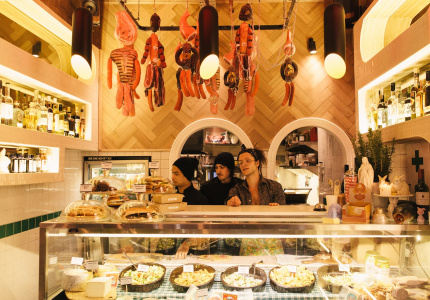