A Brew and a Burger at Dead Man Espresso 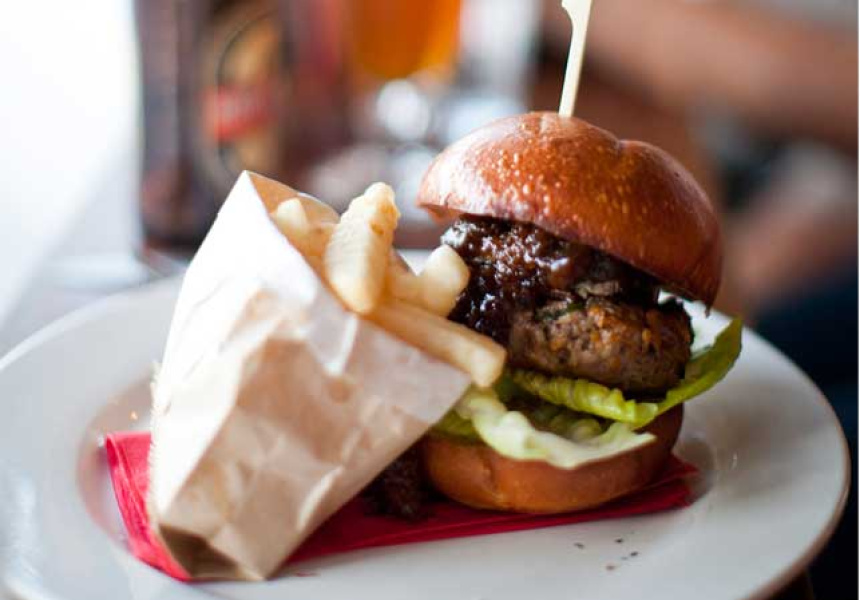 Head into the right restaurant at the moment and you might think you’re in small town USA rather than Melbourne, Australia. Our city has a pretty big obsession with American food at the moment; exhibit one being the nightly hordes descending on Huxtaburger. Even the cafe crew are joining the hamburger party and South Melbourne’s Dead Man Espresso is no exception.

Far from being behind the hamburger eight ball, the Dead Man crew have been planning their Beer Burger Brew nights for some time now, and after some staffing changes and menu refinements they’re now off with a bang. On Friday nights, the new focus is on craft beers and quality burgers.

Owner Luke Mutton says the team have been longing to open after dark for some time now. “The Dead Man aesthetics are really beautiful then and South Melbourne needs a cosy and warm place with great quality beer, wines and burgers.” Head chef Bec Kaye worked with suppliers Warialda Beef and Hook & Spoon to get the beef and lamb patties just how she and Mutton wanted them (“juicy and tasty” Mutton says).

To this end, there are four different but equally mouth-watering burgers to choose from. The Butcher takes a Warialda beef patty and teams it with aged chorizo, pickles, onion rings and relish. The Swampy is also Warialda beef, this time with cheese, beetroot relish and caramelised onion. The Pilgrim features Hook & Spoon lamb with fig relish and Milawa blue cheese. Vegetarians are welcome too; The Gardener eschews the veggie burger and instead combines roasted field mushrooms with honey from Rooftop Honey, cheddar and herbs from the veggie patch.

Just as important as the burgers are the brews. On offer are craft beers from Hawthorn Brewing Co, 3 Ravens and Hargreaves Hill as well as New Zealand’s Epic and 8 Wired, not to mention Beer Here from Denmark. Prince Wine Store are putting together the constantly changing wine list and the coffee will, of course, be as good as ever, with Seven Seeds and Market Lane providing the all-important beans.

Beer Burger Brew is on every Friday from 5pm at Dead Man Espresso.