There are choose-your-rim Margaritas, gyoza-skin tacos with soy-braised beef short rib and a focus on fresh ceviche and tostadas. A slice of Mexico has hit Windsor by way of Glen Waverley. Chef Garen Maskal has opened a second outpost of his popular modern-Mexican restaurant The Black Toro on Chapel Street.

“We wanted something lighter, brighter and more fun here,” says Maskal of The Black Toro Windsor, which has taken over the space formerly occupied for two years by his restaurant Shukah, “I love Mexican flavours ‘cause they’re fresh and punchy, with heaps of spices and citrus … it’s a no-fuss type of food.”

Maskal operates the Kalian Group with his cousins Aret and Sasoon Arzadian and is well established in the Melbourne food scene. Together they run Glen Waverley’s The Black Toro and Armenian city eatery Sezar.

In a nine-day renovation the restaurant was transformed with a deep-grey colour palette, pops of vibrant orange and green, hanging plants, and tall jars of pickles. A colourful mural by Blends from Paint the Town Murals – a woman made-up Day of the Dead-style, hummingbirds and butterflies – dominates one wall. A staircase takes you to a moody function space with an exposed-brick wall and hanging lighting.

Maskal found light, raw dishes were popular at Shukah, so he’s made fish tostadas and ceviche a focus here. One such crispy tostada carries soy- and yuzu-cured tuna, a smear of avocado and salsa macha – a mix of ancho chillies, pasilla chillies and yuzu with crushed peanuts, sesame and pumpkin seeds for extra crunch. Other new snacks include cheese and herb stuffed peppers, and porcini mushroom doughnuts. Popular dishes from the Glen Waverley menu, such as wood-grilled corn and Wagyu beef sliders, have come over to Windsor too.

Groups will find plenty to share at The Black Toro. Try large “Familia” dishes, such as grilled baby barramundi, sweet corn fideos (short noodles cooked into a Mexican-style casserole with stacks of cheese and grilled and pureed corn). Or lamb barbacoa. First the lamb’s brined and marinated in a chilli and pepper mixture, then it’s wrapped in banana leaf to cook overnight for 12 hours in a barbeque-style Barazza oven. It’s served with soft mini La Tortilleria tortillas, a herb salsa verde and salsa roja. Maskal says, “Shred off a piece of lamb, add your pickles and salsa and tuck into that like your own little taco.”

Inventive taco dishes include a beef short rib slow-braised in soy sauce, sesame and sugar and topped with radish. It’s tucked inside a crispy shell made from a fried gyoza (dumpling) wrapper that bubbles up for a lighter, more textural shell. For a solid spice kick try the pork cochinita taco – the marinade has achiote paste and habanero chillies. For dessert there’s cinnamon-rolled churros served with malted ice-cream and salted caramel.

The wine list is dominated by Spanish and Argentinian varietals, and beers are Mexican, Spanish or local. Like in Glen Waverley, pitchers of frozen Margaritas are on the cocktail list; there’s a sweet mango and lime flavour, and a zesty coconut lime and jalapeno number. A new 90-minute, $28 “Make it Bottomless” option is available on weekends, which includes frozen Margaritas, mimosas and Bloody Marys. And you can jazz up a classic Margarita with a choice of rims including yuzu, ancho chilli, Tahitian vanilla or pink-grapefruit sugar.

“Normally I hate the salt rim on a Margarita, it’s too overpowering, but I love the chilli rim,” says Maskal. “It’s what people really seem to appreciate so far.” 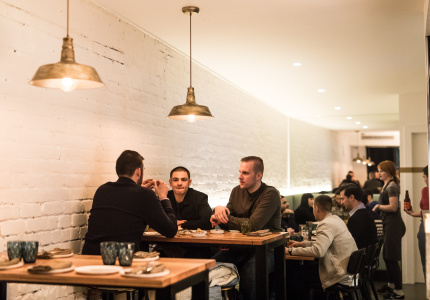