From mulled wine hot cross buns to caramelised coconut Easter eggs, these are some of the more inventive snacks to devour in the lead-up to – and during – the four-day weekend. 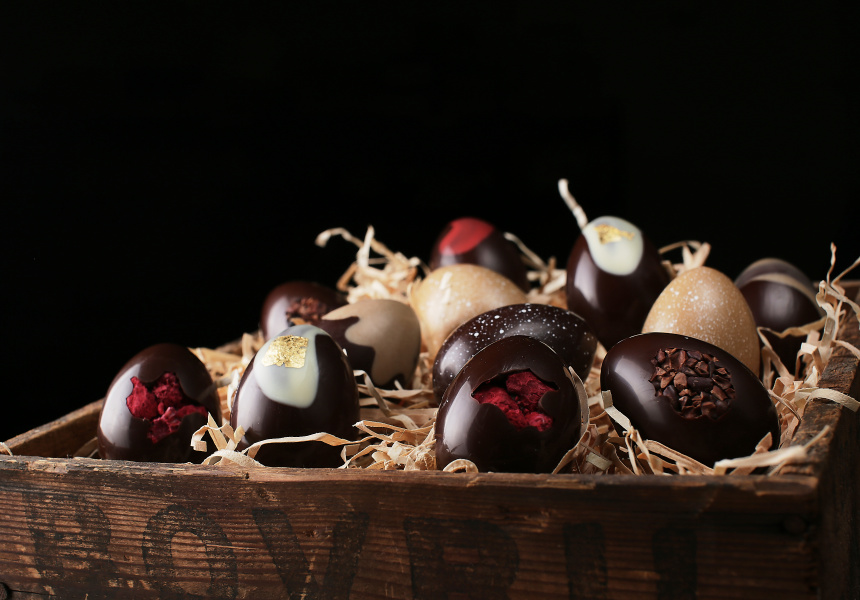 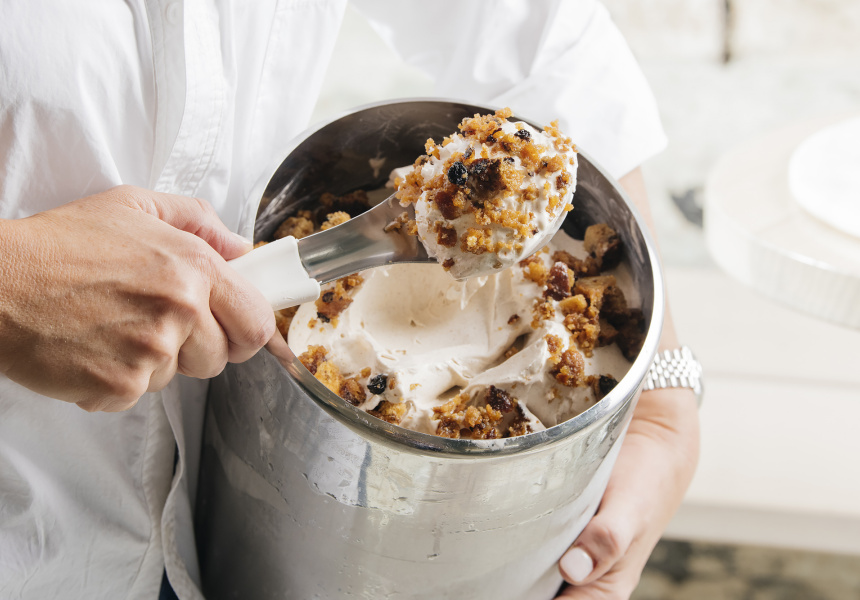 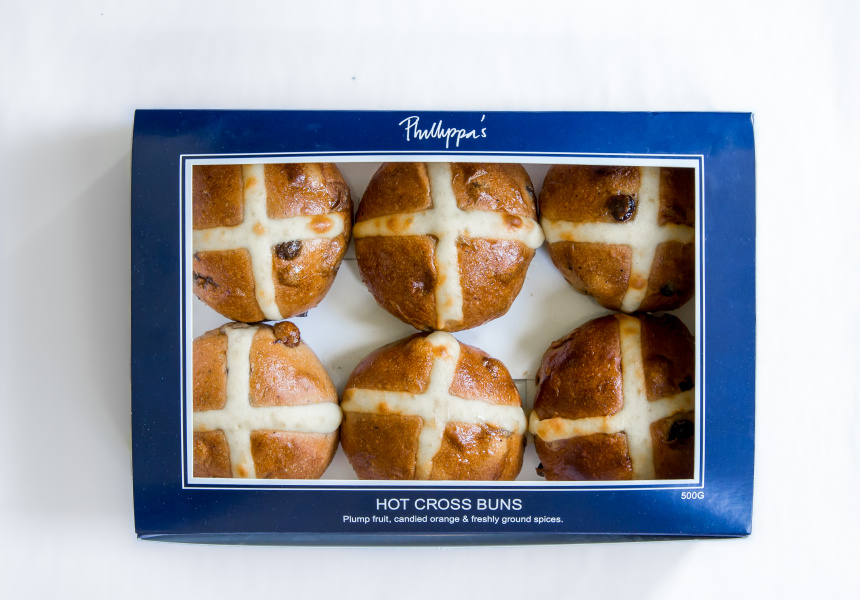 This time every year, offices around town fill with the smell of cinnamon, candied orange peel, and warm, just-melted butter as hot cross buns sweep the city. Melbourne’s best bakers all release bespoke batches, but this year it’s not just the buns we’re dreaming about. Here are some of the best places in Melbourne to get a sweet Easter fix this year.

Easter Eggs and Triple-Chocolate HCBs at Mörk
North Melbourne chocolatier Mörk is bringing its triple-chocolate hot cross buns back for a fourth year. These $6 buns are choc-full of pleasure, featuring candied orange zest, spices, sour cherries, currants and an oozy chocolate-orange ganache centre. Get in early or pre-order – last year they sold out daily. There are some inventive Easter eggs on offer too, including smoked salt and almond praline, Madagascan cacao and sea salt, raspberry and juniper sherbet, and kaffir lime and coconut.

Lamington Valrhona Eggs and Salted Caramel Macadamia Eggs by Vue de Monde
Splurge on a box of these fancy hand-made eggs by Vue de Monde executive chef Hugh Allen. A box of six Valrhona chocolate eggs costs $100, and comes with three salted caramel macadamia eggs and three lamington eggs, which are filled with milk chocolate and coconut ganache and house-made raspberry jam. They'll be available to order from Friday, April 12th but you can pre-order online now. Be quick though, as there are only 50 boxes available.

Traditional HCBs at Phillippa’s
These might be traditional, but they’re no run-of-the-mill HCBs. Artisan bakery and provisions store Phillippa’s is making soft, moist buns made with minimal yeast and slow-fermented dough. They’re loaded with candied citrus peel from organic farmers’ market oranges, too. Grab a box of six for $18.

Chocolate Orange HCBs at Dench Bakers
Also known for their sourdough, the Fitzroy North bakery’s owners, father and son John and Tony Dench, have been using the same hot cross bun recipe since opening in 2005. Their traditional hot cross buns are made from organic wheat flour, pureed orange, Australian vine fruits, fresh ginger and a secret spice blend, but they also do a chocolate and orange bun with more orange, milk chocolate and Belgian dark chocolate. They’re $3.40 each, or you can grab six for $18.50.

Inbetween Eggs at Koko Black
Koko Black’s head chocolatier Remco Brigou has designed a range of limited-edition chocolate eggs that delicately combine two flavours. The jumbo-sized eggs are $22 each; combinations include cookies with white chocolate, passionfruit with 54 per cent dark chocolate and caramelised coconut with milk chocolate. They’re all made with couverture chocolate and come in beautiful packaging inspired by autumn.

Spiced Chocolate Brioche HCBs at the Hotel Windsor
The historic city hotel’s head pastry chef Jérémie Parmentier has created a hot cross bun incorporating his French heritage, replacing the traditional bun dough with soft brioche. The fluffy spiced bun comes in two flavours – one traditional, the other a spiced chocolate version with sultanas and a molten dark chocolate centre. A box of nine costs $18 and must be pre-ordered.

Fermented HCBs at Q Le Baker
Quentin Berthonneau, head baker at Prahran Market’s patisserie-boulangerie Q le Baker, is fermenting his hot cross bun mixture to develop flavour and complexity, and is using both yeast and sourdough to create an even balance of texture and flavour. Sun-dried fruit sourced from a nearby farm is fermented overnight in a ginger beer bath with aromatic spices. They’re $3.50 each, or six for $18.

Eggs in Verjuice (c.1730) at Dinner by Heston
Dining at fine-diner Dinner by Heston is always an experience, and the five-course menu running exclusively over the Easter weekend is no exception. One highlight is a returning favourite, “Eggs in Verjuice (c.1730)”. A coconut and verbena panna cotta stands in for egg white, which surrounds around a soft verjuice and citrus yolk. The egg is encased in a blue “emu” eggshell made from white chocolate, then nestled in pastry and candied fruit.

Chocolate and Yuzu Egg Dessert at Mr Miyagi
Contemporary Japanese diner Mr Miyagi is serving up its twist on Easter creme eggs. The limited-edition dish features a chocolate and yuzu creme egg with champagne and peach ice-cream, salted white chocolate biscuit, dehydrated yuzu meringue shards and orange olive oil snow. Get them quick – only 100 of these desserts will be served over the long weekend.

Marsala, Orange Peel, Milk and White Chocolate Gelato at Gelato Papa
Preston gelataria Gelato Papa has created a decadent HCB-flavoured ice-cream. It’s made with milk chocolate gelato, white chocolate, cinnamon, marsala-soaked raisins and candied orange peel. Grab a cone or a cup ($5 each) for yourself or take a half-litre tub home ($15) for the family.

Easter Dippy Eggs at Good Times Milk Bar
The dippy eggs at Good Times Milk Bar are a year-round savoury menu item, but this Easter the Bentleigh cafe is putting a sweet twist on the dish. Instead of sourdough soldiers and avo-cream, it’s served with apple and cinnamon loaves you can dip into chocolate caramel creme eggs, with strawberry coulis, lemon curd, mascarpone, and sugar strands. It’s a playful, hands-on dessert.

Mulled Wine HCBs at Gontran Cherrier
Inventive French boulanger Gontran Cherrier has outposts in Collingwood, Hawthorn and Richmond, and is known for getting creative when it comes to pastry. This year, the team is serving traditional buns alongside a mulled wine variety, made using star-anise, cinnamon, macerated raisins, candied orange peel, French butter and unrefined French flour. They’re super rich and taste like mulled wine without the addition of any actual wine, so they’re kid-friendly, too.