Ambitious, beautiful new venues by some of the biggest names in food right now. Restaurants open in Melbourne all the time, but sometimes one stands out – for its food, its design, its individuality. We’re lucky to have had four open in the past few months. If you’re dining out this weekend, make sure it’s at one of these.

Etta is made up of two polished spaces – one a bar, one a dining room – separated by an open kitchen. Both rooms centre around large, expensive-looking benches made from Australian marble. Iva Foschia, whose IF Architecture designed the new fit-out for Cutler & Co. and Attica, designed the 80-seat bistro. She restored some of the space’s inherited features (the place used to be a fish-and-chip shop) including the stone floor in the front section and hardwood floorboards in the back.

New Zealand-born chef Hayden McMillan (formerly of The Roving Marrow) runs the restaurant with his wife Dominique Fourie McMillan, and Hannah Green. Green and McMillan used to work together at Neil Perry’s Rosetta, and would regularly eat together at The Roving Marrow, where the group concocted their own future diner.

McMillan’s seasonal menu draws on flavours from all over the world, similar to, but a little more approachable than, Roving Marrow. More than half of the menu is vegetarian. Dishes include tamari- and brown-sugar-roasted buttercup pumpkin served with a dairy-free sunflower cream. And Flinders Island lamb marinated in a cumin and fennel seed dry rub, then cooked on a Japanese-style binchotan charcoal grill.

Kisume isn’t like Chris Lucas’s other restaurants. There’s no thumping music. No deafening noise. No waiters dressed in casual clothes. No riotous colours on the walls. This is not another Chin Chin, or another Baby, or Hawker Hall.

The three-storey Kisumé (“ki-soo-meh”) looks and feels like a New York restaurant – the kind you’d find in mid- or lower Manhattan – in scale, design and diner, and in the bustling city location. There’s controversial art on the walls, uniforms designed by Alpha60 and a sleek fit-out

That’s Lucas’s goal here – a restaurant of “international status” that will “redefine higher-end dining” in Melbourne. We haven’t seen many things this physically large and conceptually ambitious in Melbourne. It makes the Lucas Group’s other restaurants seem modest.

There’s “a really big-city, New York-style” sushi bar on the ground floor, with an intimate view of Japanese brothers Yosuke and Shimpei Hatanaka carefully slicing bluefin tuna, salmon, prawns and sea bream from Australia and New Zealand. The windowless basement is the buzzing part of the restaurant, containing an open kitchen, a large semi-private nook and tables packed more densely than anywhere else. Dine on Wagyu tartare, maple- and soy-glazed Berkshire pork ribs, prawn and foie gras “potstickers” and a bento box of colourful, almost too-beautiful-to-eat sushi and sashimi. And After dinner, head to the top floor for a night-cap (we recommend the yuzu cocktail) at the Chablis Bar.

For anyone who’s ever waited for a table at Tipo 00, Osteria Ilaria is a welcome addition to the family. But this isn’t Tipo 2.0. “No pasta,” says chef and co-owner Andreas Papadakis. “Well, we might do one pasta course, but it won’t look like your typical bowl.” So apart from grin-inducing, pillowy gnocchi, and paccheri with crystal prawns, the menu looks like something you’d find at a modern osteria in Italy (though other European cuisines get a look in). This loose approach extends to the wine. The list ventures outside of Italy to Portugal, France and even Georgia.

There’s lamb cutlet with a blood-red spicy peperonata you’ll end up eating by the spoon, zucchini flowers, and salumi to start, then duck, pork and whole whiting for mains. There’s a big focus on bread, too, with a few different options including a 48-hour fermented sourdough and a gluten-free grain bread.

Like Tipo 00, Osteria Ilaria has been designed by co-owner Luke Skidmore’s architect sister, Briony Morgan. It's contemporary but rustic and warm, with bare white-brick walls and timber tables. The building dates back to 1887, and the dining room makes a feature of some of those historic architectural details, such as arches.

Make sure to look down when you walk in the door: the floor has been hand-painted by Aaron McKenzie Design in the vein of a European-style mosaic in turquoise and red.

Technically, this restaurant isn’t new, but the Cutler & Co that reopened in March is totally unlike its predecessor. Andrew McConnell enlisted Iva Foschia of IF Architecture (who also did the fit-out for his wine bar, Marion) to helm the remarkable redesign, which has enabled the space to move seamlessly from a light, airy daytime diner to a sultry dinner spot at night.

The front bar is now a destination in its own right, with bronze detailing and a large open kitchen where you’ll see McConnell and head chef Chris Watson most nights. Settle in after work at one of the high tables and feast on a platter of fruits de mer (seafood is the focus up front) and a cocktail.

Two moody, luxurious dining rooms (one with a French-made fireplace) fill the rest of the space. Think suede banquettes you sink into as soon as you slide in, and touches of slate-flecked stone and green granite.

After steaming-hot bread with sweet, house-cultured miso butter, try the smoky, meaty Jerusalem artichoke topped with burnt onion. Don’t miss the charred maron, cooked over a Japanese charcoal grill and served with grilled cos and seaweed powder – it’s so good it will make you laugh. Our advice: go with the chef’s selection if you can.

Cutler & Co is located in an old metal-works factory, and Foschia’s refurbishment ensures that history remains a protagonist. She’s ripped out part of the back wall and put in windows that let sunlight drench the room during the day, and which provide a Mary Poppins, industrial-style silhouette of old chimneys at night. 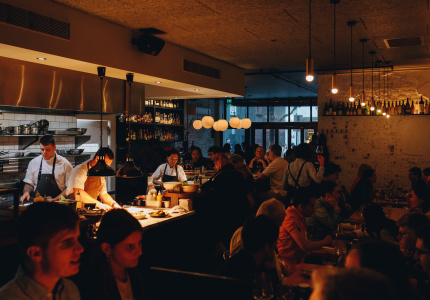