Whether a marbled cut of beef for brisket, or big fatty ribs, an American barbecue will never be truly great without top quality meat. We spoke to cattle farmers at Hopkins Farm about the best cuts of beef for a classic barbecue. 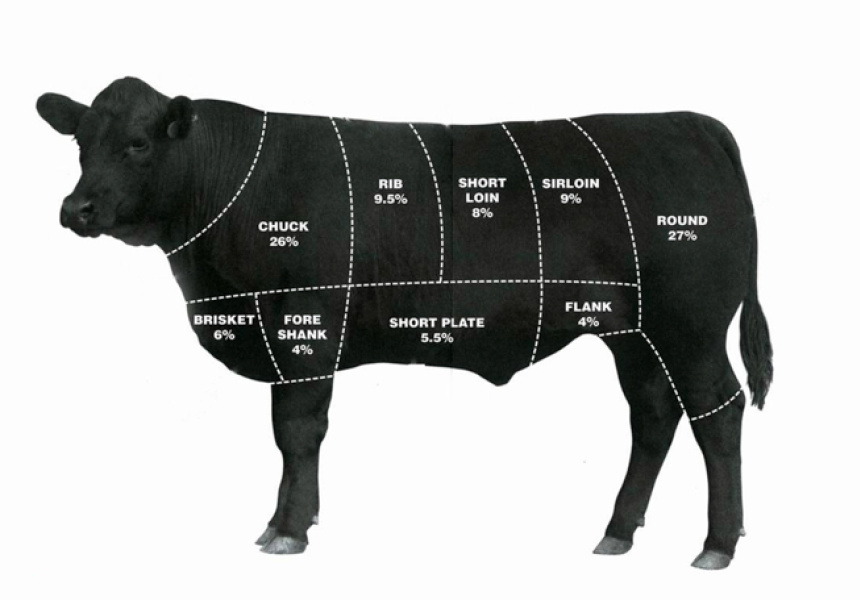 Through our exploration of American barbecue with Bulleit Bourbon, we’ve found that the pit master is a extremely important protagonist in the world of the classic barbecue. But some will contest that they are by no means the most significant player in the process. Indeed, it’s the meat – and those who tend to it – that takes centre stage.

American barbecue is ultimately about simplicity. Instead of applying fancy techniques found in a fine-dining restaurant, a barbecue cook simply grills a piece of meat over a wood fire for a long time. Although the technique’s not complicated, it’s the single best way to bring out the elemental flavour of whatever you’re cooking – giving it that flavourful barky skin on the outside and tender, meat below the surface. To have a truly great barbecue, you’ve got to use truly great meat.

Luckily, there’s plenty to choose from. Australia’s long boasted top-quality livestock and our cattle are among the world’s best. We spoke to local farmer Adam North at Hopkins River Beef about the best cuts for the barbecue.

Brisket is the undisputed king of American barbecue. Taken from the breast of the cow, the section referred to as the brisket hangs underneath the ribs. “The brisket works in much the same way as the pectoral of a human,” says North. “It’s located at the front of the beast and is a muscle that gets a lot of work”

It’s a cut that hasn’t been very popular in Australia over the years due its wealth of collagen, which makes it one of the least tender cuts of meat. But all that connective tissue makes it perfect for barbecue. While a leaner piece of meat would shrivel to a cinder after 16 hours in the smoker, the brisket becomes ever more succulent with each passing minute.

“Brisket needs to be cooked slowly and at a low heat in order for the connective tissue to really break down and gelatinise,” explains North. “It’s like the pulled pork of beef.”

The other cut of beef that’s an essential part of any American barbecue is, of course, the beef rib. Like brisket, it’s blessed with a wealth of connective tissue that, when heated slowly, disintegrates.

As a general rule, the quality of any given piece of meat will be determined by how it’s raised. Hopkins Farm, for instance, sells cattle that are only ever fed grass, plus a range that grows up in a pasture, but is “finished” eating grain in a feedlot. “Much the same as humans, [the saying] 'you are what you eat' works the same way for cattle,” says North. “As long as the animal is grazing on lush and nutrient rich pastures, you are in for a really good piece of beef.”

The other element that makes a rib brilliant for unhurried cooking is that it’s cooked on the bone. The rib bone conducts heat evenly throughout the meat, essentially cooking it from the inside. Plus, it’s built-in cutlery. “There is also something a little prehistoric about eating meat off the bone that a lot of blokes like,” laughs North.

Broadsheet and Bulleit Bourbon have partnered to explore the underground culture of American barbecue over the coming months.