Formerly housing a Brunswick East pizza institution, the new late-night restaurant pays respect to its predecessor while going in a new direction. When Cafe Romantica closed in May last year, Brunswick East was bereaved – it was the end of more than thirty years of parties, pizza and pool games for the 24-hour diner. Over its life the red-sauce joint had become a reliable late-night home to a range of demographics, as diverse as the suburb it lived in. Cafe Romantica’s all-night closing party featured table dancing, and its famous neon signs were flogged off in cash sales and of course many tears.

New owners Henry Crawford, Oscar Hermann, William Howard, Monty Mullooly-Hill and Ravi Thompson have wisely taken the venue in a different direction, rather than try to compete with Cafe Romantica’s legacy. But one crucial element has been retained.

“We do a pizza until 5am on Friday and Saturday called Pizza Romantica that will always remain on – as a nod to Cafe Romantica,” says Crawford. You can breath a sigh of relief people.

But while you can still get late-night pizza, chefs Rory Kennedy (Host Dining) and Joseph Farrell (Lûmé) have made big changes to the menu. Each day, after consulting with their suppliers, Kennedy and Farrell design a new menu for that night’s service, maximising the use of fresh-produce and off-cuts. This could mean steak tartare with smoked egg yolk and potato crisps to start, or a larger dish, such as generous chunks of seared kingfish with lightly pickled kohlrabi, and olive-and-leek tapenade with capers and dill.

Several of Bar Romantica’s owners carry over from laidback North Fitzroy bar Monty’s, which shows in the relaxed service and simple drinks list. So far the menu’s all-Australian, with craft beers from Victoria and drops from the Yarra Valley and the Mornington Peninsula, backed up with classic cocktails.

Former clientele will recognise a few elements from the original room. The terrazzo floor remains, along with a pool table at the back (which is free to play); the old granite bar has been repurposed into love-heart-shaped tabletops by furniture designers Dust Merchants.

But in many ways the interior has had a drastic overhaul too, and features breathtaking joinery by Howard, a furniture maker by day. A massive crescent of wooden bar now occupies the front of the room. Made of American oak, the bar top has been sanded back to a soft lustre, allowing the wood grain to breath.

“We definitely wanted to keep it classic,” says Crawford. “This place identifies with a more old, European aspect, which we’ve tried to keep”.

That old-world atmosphere is carried through the venue by more of the American oak joinery. Wooden arches cross the roof from the bar to the opposite wall, which is lined with deep scalloped booths.

At the new Bar Romantica, the lights and palette have been turned way down. The old, harsh fluorescent light fixtures have been swapped for warm art-deco milk-glass pendant lights, and the bar and booth seating is upholstered in valentine-red vinyl.

The effect is pronounced: Bar Romantica is genuinely romantic.

“This room creates so many opportunities for different occasions,” says Crawford. “Come with your parents, or on a date late at night and you can find a spot in here that accommodates that.”

Opposite the booths is more bar seating looking into the open kitchen, which includes Cafe Romantica’s original pizza oven.

The changes all add up to a bar that nods to its history, without being beholden to it.

“This place has bounced around through many different people – and has meant a lot of different things to a lot of people,” says Hermann. “We wanted to keep its spirit.” 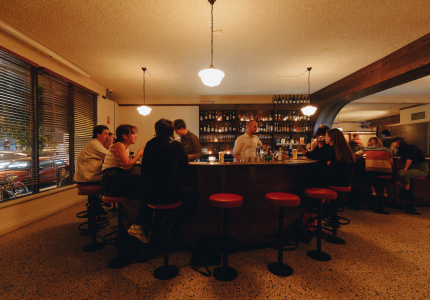