Freddy and Lisa La Spina, owners of Brunswick East’s Bar Idda, are about to breathe some fresh Sicilian air into the narrow streets of Fitzroy, taking on the lease of Felice’s just off Smith Street. 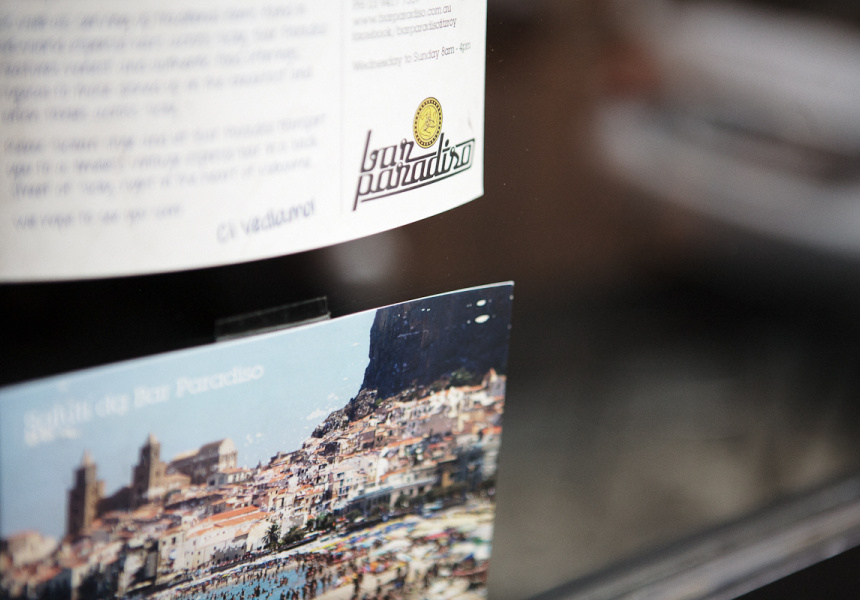 Just like at Bar Idda, Freddy and Lisa La Spina’s latest venture, Bar Paradiso, makes clear their passion for Sicilian traditions. Retaining the 70s aesthetic that made Felice’s a haven for playing cards and drinking, Bar Paradiso conjures a similar nostalgia and warmth. Felice’s foosball table and giant aeroplane mobile may have gone, but the wood panels on the walls and the tinted mirror opposite the bar remain.

Lisa has collected vintage ashtrays advertising Italian classics like Peroni and Cinzano, and the décor has an art deco lilt with round, mirrored tables and larger wooden ones clothed in classic checked patterns for larger groups. Nestled between bottles of Campari and Amara Montenegro, a tiny vintage television (similar to Bar Idda’s) plays black and white footage of Formula 1 racing from another era. Succulents in glazed brown and deep blue pots are clustered on shelves to add some greenery. Brightly coloured flags (homage to Sicilian football teams) are pinned by the bar. It’s these touches that make Bar Paradiso feel authentic.

The menu is a humble one. Each dish has a story and Lisa shared a few with us:

Ciccio’s Special
“Freddy’s dad made a habit of pouring a milky coffee over cornflakes for brekkie, seriously. Our version’s toasted granola and puffed faro – faro is all over Sicily – with a caffe latte panacotta.”

Industrial Avenue
Lisa tells us that this dish is based on a spot in Tullamarine where cheese and smallgoods factories sidle one another. “Nonnas go down there with a pot to fill with ricotta for the week – they have since the 70s. That’s why we’re serving the poached eggs on warm ricotta in individual pots.” Topped with parsley, this is true comfort food. Poke the yoke and mix with warm, peppered ricotta.

Morning Smoko
Frittata of the day served on Sicilian salami. “Freddy grew up on his family’s farm in Sicily and this is a take on what his mum would bundle up for his dad as a morning snack.”

Arancino
Arrancino made with saffron rice, beef and pork ragu, peas, soft-boiled egg and mozzarella. Perfect in the afternoon, washed-down with a Messina beer.

Panino No.1
A roll for vegetarians to long for. “We’ve taken a traditional caponata and made eggplant the star, so it’s hearty for our vegetarians. The caponata is infused with bitter chocolate.”

Pasta alla Norma
Lisa describes Pasta alla Norma as “a very, very simple, everyday pasta”, which she has “all the time” in Sicily. Thankfully, now Melbourne can too. It’s incredible: spaghetti tossed in a rich, smoky passata, with eggplant and topped with strings of salted ricotta.

‘Nzalata
‘Nzalata is a rustic tomato salad dressed subtly with anchovy. “It’s finished off with toasted breadcrumbs. This is really common in Sicily. Back in the day if you couldn’t afford parmesan, you’d use breadcrumbs instead because they have a similar texture to parmesan – made you feel like you weren’t missing out.”

Dolce
Pippo’s Zeppole, is a deep fried doughnut named after Sicily’s Patron Saint, Giuseppe. “We drizzle saffron honey and almond syrup on top.” Cannolo is piped with ricotta and ends are dipped in crushed pistachio. Try either sweet treat with a small glass of pure hot chocolate.