A Baker’s Dozen To Try: Instagram Bakeries Rising Out of Melbourne’s Lockdowns 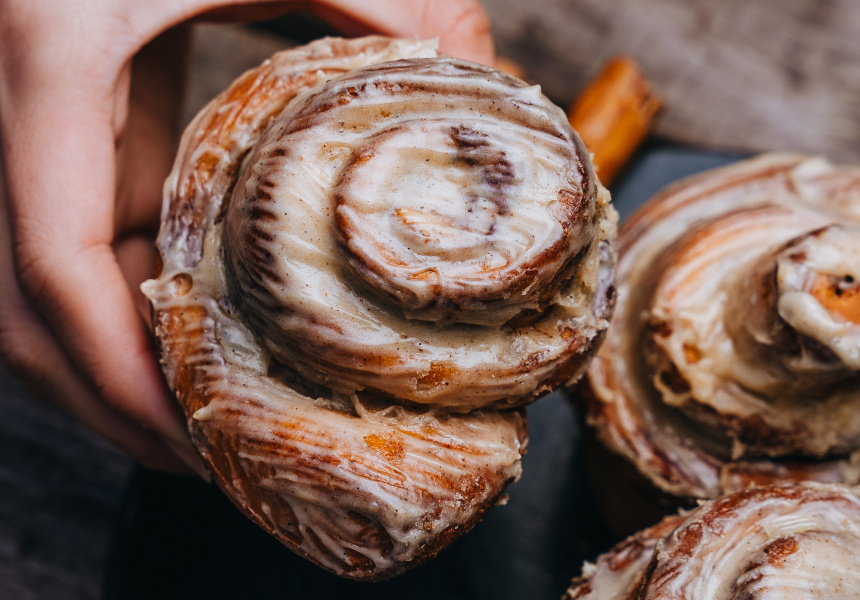 Melbourne’s best bakeries were a lockdown saviour. But it wasn’t just the IRL ones. Since Covid first hit, a raft of Melbourne bakers and pastry chefs have turned to Instagram to sell their carby, creamy, custardy creations online. Here are 13 – a baker’s dozen – whose DMs are worth sliding into.

Cam’s Bread
Cruising in his ’91 Subaru Liberty, Cam Matte drops sourdough bread around town – a side hustle that came to fruition at the start of 2020’s lockdowns. He and his partner Taylah got their hands on a sourdough starter and, before long, Matte was watching Youtube videos trying to perfect his loaves. But it was when one friend asked him to supply loaves for his catering company, and another for Cathedral Coffee in the Nicholas Building, that things really took off. Matte has since gone from baking a loaf at a time in his small home oven to installing a commercial one that can bake six at once. The spongy loaves are made at his home in Eltham, then distributed across Melbourne. And there are three to choose from: classic white, rye and caraway, and sesame seed.

Cam’s Bread is available twice a week, usually Tuesdays and Fridays. Keep an eye out for bread-drop locations on Instagram and order via DM. Loaves are $10; delivery is $2.50 to Eltham and surrounds.

Rosemary Andrews’s Sweet Boxes
While not an Instagram bakery as such, we don’t want you to miss out on these sweet boxes on a technicality. Pastry chef Rosemary Andrews – the woman behind the majestic, much-Instagrammed dessert trolley at Ben Shewry’s now-closed Attica Summer Camp – is now selling her creations online. Her most recent batch included a trifle-like cake with strawberries, almond and mascarpone; a creamy layer cake with honey, coffee and dulce de leche; and a twice-baked flourless cake with 70 per cent Valrhona chocolate. Plus, her knockout lemon tart, which Shewry told Broadsheet in February was the best he’s ever eaten.

Keep an eye on Andrews’s Instagram page for the next dessert drop.

New boxes are released on Tuesdays, for Saturday delivery or pick-up in Collingwood. Order online. Boxes are $45; delivery is $7 for those within 10 kilometres of Collingwood.

Naro Bakes
Carla Montanaro did her apprenticeship at Supernormal and was most recently head chef at Heart Attack and Vine. But when the Lygon Street eatery pivoted to a providore-style offering in Melbourne’s 2020 hard lockdown, Montanaro’s passion for all-things pastry was reignited. She began baking hulking pies for family and friends. But demand for her pies, topped with buttery puff pastry (that she makes and rolls by hand), grew quickly, and in September she started delivering them across Melbourne. Her savoury pies are available with a range of fillings: there’s the Matilda with pulled pork and sage; the Full Monty with chunky beef and gravy; the Maria with creamy chicken and smoked bacon; the Elizabeth with slow-cooked lamb, rosemary and potato; and the Madeleine with spiced lentil and roast pumpkin. There are also two sweet options: the Jaclyn, a slow-cooked apple crumble, and the Canning, a double-chocolate brownie slab.

Order online for pick-up or delivery to select suburbs. The pies are $35; delivery from $5.

Munch Bakery
After experimenting with Willy Wonka-like fervour during last year’s lockdowns, the El Salvador-born Eddy Urias-Castro decided to launch his own online bakery. Every fortnight Urias-Castro shops at Preston Market on Sunday, cooks up a storm on Monday and Tuesday in a commercial kitchen, and then delivers his creations on Wednesday. Perhaps most exciting is the El Pastor, a barbacoa shepherd’s pie made with beef brisket (braised for eight hours in chipotle and adobo) that’s then impressively piped with a lemony chive mash. There’s also the Malaysian-inspired Labu Labu, with caramelised pumpkin, potato and zucchini in a coconutty curry sauce; and the aptly named Humble, a three-apple pie made with fujis, granny smiths and pink ladies.

Munch Bakery delivers every Saturday within 20 kilometres of North Melbourne, or you can pick-up from Door 1/64 Sutton Street, North Melbourne. Order online from Monday to Wednesday. It’s $33 for two pies and $66 for four.

Beurre
“Great jab!” “Yay, science.” “Congrats on your vax!” And the tongue-in-cheek, “Poppin’ buttons for Sutton” (a respectful reference to Victoria’s chief health officer Brett Sutton). They’re just some of the phrases local cake business Beurre is slapping on cute, Covid-defiant cakes – using post-vax snacks as a way to encourage more people to get the jab. (They’re a level up from the bickie you’re rewarded with after giving blood.) The one-woman show is run by Zahara Valibhoy, a Melbourne-based chef with a passion for patisserie, who once worked at world-renowned macaron specialist Ladurée in Paris. When event cancellations in the wake of lockdown 6.0 “decimated” the orders she had in the pipeline, Valibhoy decided to pivot with a purpose. The cakes come in three flavours – including a Biscoff-inspired one – with vibrant colours and kitsch piping.

Order online by Thursday for delivery on Saturday. The cakes are $45; delivery is free within 10 kilometres of Balwyn or $15 beyond that radius.

Order online for Sunday delivery or pick-up. Orders open every Monday from 6pm until sold out

Order via Instagram DM or email for delivery or pick-up in Southbank.

Tarts Anon
Dessert operation Tarts Anon – by ex-Dinner by Heston head pastry chef Gareth Whitton – is making just one thing: tarts, of course. Weekly drops have included cherry-almond dusted in icing sugar; the signature pear; pumpkin and spiced caramel; carrot cake; choc-caramel; berry-and-lemon cheesecake; and passionfruit and ginger – all encased in thin and crisp pastry. The team has opened up a permanent kitchen in Cremorne, with more tarts and pick-up times than ever. Keep an eye on the Tarts Anon Instagram page for announcements.

Orders open at 6pm on Mondays for pick-up the following Sunday in Cremorne. Order online.

Alsa Bakers
With their Insta bakery Alsa Bakers, Filipino-Australian chefs Yanna Hermoso and Jolo Morales hope to share their heritage with Melburnians through the baked goods they grew up with. Pandesal – slightly sweet Filipino bread rolls – are available in a handful of varieties including rye, and latik (caramelised coconut). For the unacquainted, the soft and fluffy loaves are traditionally pulled apart and eaten for breakfast. The couple also sells ensaymada, a brioche-type bread topped with cheese.

Order via Instagram DM for pick-up in West Melbourne.

Order via Instagram DM for pick-up in Glen Waverly or delivery from $5. Assorted macarons are 10 for $30.

Chic de Partie
England-born pastry chef Aidan Robinson had been working at Melbourne’s Dinner by Heston before it went into liquidation in February last year. But when the pandemic hit the next month, Robinson was forced to get creative. He began baking for neighbours before transforming his second bedroom into a professional commercial prep kitchen to launch Chic de Partie. Robinson bakes Portuguese tarts and macarons, which come in boxes of six, eight, 12 or 20. The standout, though, is the pan of boozy brioche rolls, soaked in a sauce of brandy, wine, sugar, vanilla and cream. While Chic de Partie is currently booked out, keep an eye on the Chic de Partie Instagram page for updates.

Order online for pick-up or delivery.

Laantaan
Tan Hansapinyo and business partner Mary Megally opened their online bakery Laantaan in April 2020, but the business flourished after coronavirus pushed them to offer home delivery. The first product they developed was a buttermilk bun duo – after the buns are baked, pairs are pressed together and piped with a creamy filling. The whole thing is topped with butter and sugar. The two signature flavours are salted duck-egg yolk and Thai tea (black with strong spices). They’ve also done specials with durian, Nutella, and pork floss with chilli jam.

Laantaan is open from Tuesday to Sunday. Order via Instagram DM while it's website is under maintenance.