Back to the Butcher

A butcher shop in Richmond is going back to old-school service, quality and provenance to reframe the perception of what we think a butcher can be. 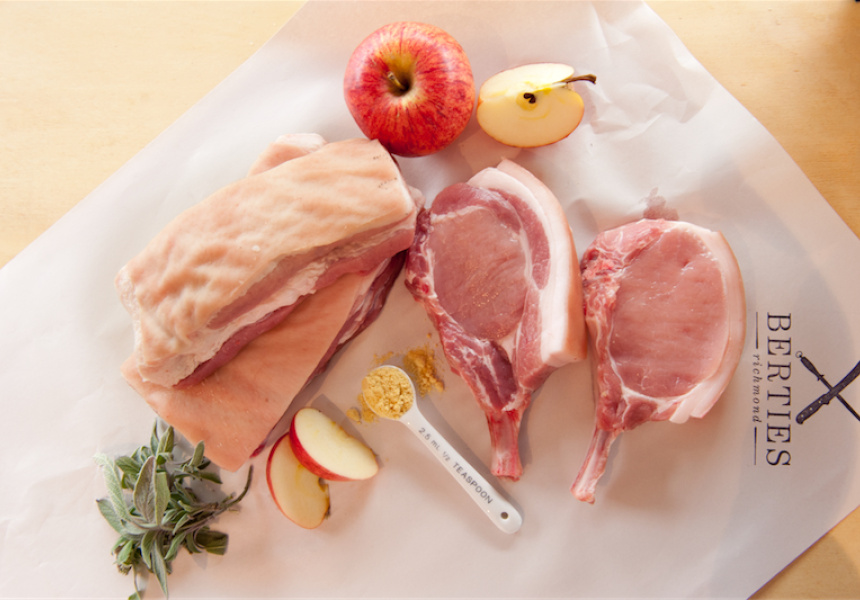 The space that is Berties Butchers has been a butcher shop since 1870. Since then, just four families have owned the space, the most recent being the Ewert family who owned the shop for 45 years up until five months ago. That’s when business partners Ali Dunworth, Darren Moncrieff and Jason Gabriel bought the business. They kept Darren Ewert on as head butcher and created a shop that is uncompromising on its insistence of provenance, quality and the story behind each of the products they choose to sell.

Old friends, Dunworth and Moncrieff met in London and would talk for hours about food and owning a food business, while scouring markets of London swapping ideas. The dream was realised in Melbourne, “I was in Sydney,” says Dunworth and Darren called me and said, ‘Do you want to buy a butcher shop?’ So I moved here.”

While Moncrieff runs the marketing side of things, Dunworth, a former food TV producer, is the shop manager talking customers through the specific produce that she has travelled the state to find.

“This kind of shop is really big in the UK,” Dunworth says, “selling stuff with provenance and a story and we wanted to bring that here.”

Not knowing Melbourne well but having good connections, Dunworth started from the beginning and googled and called and asked everyone she could where they got their produce.

A point of difference at Berties is that they only get whole carcasses in and butcher back-of-house. “On particular days, the guys are out the back all day, breaking breaking breaking, there’s always lots of trim leftover and that’s how we make all of our sausages, usually 10 different types,” Dunworth says.

As well as sausages you’ll find beef from the co-op, Gippsland Natural and the high-end Wuk Wuk beef from Grassvale farm in East Gippsland. All beef is grass-fed and all the meat is free-range. There’s Saltbush lamb from South Australia and the pork is from Greta Valley near Wangaratta, delivered every Wednesday by Brian the farmer. “Brian will tell us if the pigs have had a good week, what they’ve been eating, what they’ve been up to,” laughs Dunworth.

As provenance is so important, and naturally changeable, there are four small chalkboards behind the counter stating where the meats have come from that week. You’ll also find shelves stacked with dips, cured meats, interesting wines and jars of chilli, mustards, horseradish and Johnno’s tomato sauce from Tasmania (that apparently has an irrationally enthusiastic following).

Third business partner, Jason Gabriel, who has worked front-of-house at Cookie for the last eight years, will set up a kitchen and eatery behind the shop in the next few months.

It’s more than a butcher shop here- the history the building holds alone is palpable. From the huge framed photograph of Kevin Sheedy and Francis Bourke breaking down meat in the shop the day before the 1974 Grand Final, to the families who have been coming here for generations, it’s the personal service and the effort taken by the team to provide omnivores with sound, ethical choices for their meat that will see Berties potentially set the blueprint for butchers for years to come.