Now Open: One of Melbourne's Best Bagel Stores Has a New CBD Spot

5 & Dime has opened a second store with vintage-style signwriting from a celebrated artist and ten different bagel varieties. 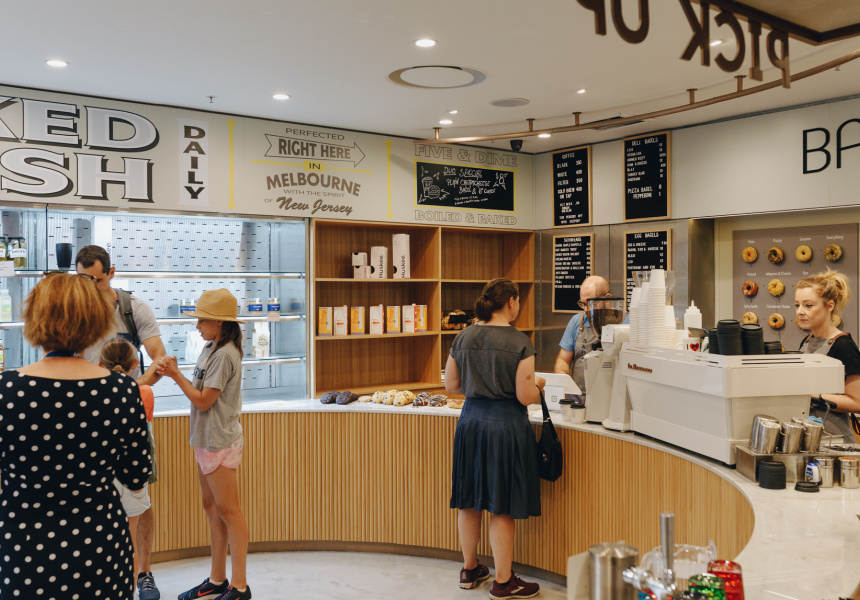 5 & Dime is one of Melbourne’s best bagelries selling authentic boiled and baked New York style bagels at the bottom end of the city. Now owner Zev Forman has opened his second store, this time next door to Kino Cinema in Collins Place.

After doing the rounds slinging bagels at various markets, Forman opened the first 5 & Dime four and a half years ago as a bakery with a small café attached in Katherine Place near the Sea Life Melbourne Aquarium. Forman remembers the build of the first store well – his daughter Betty was born the day the oven was installed and his phone has alternating photos of the two. After spending two years looking for a second venue, the Collins Place store became available and he went for it.

While they originally started off only pouring American-style filter coffee, 5 & Dime now have an espresso machine in both locations, but there is still a strong focus on batch brew filter coffee and the new store also boasts cold brew on tap. Behind the coffee machine you’ll see a wall with small metal pegs sticking out of it displaying up to ten different bagels.

“When I first started, I was very into only doing traditional flavours; sesame, poppy, everything or salt,” says Forman. From what started as a fairly straight-up offering of classic flavours, Forman has upped the ante as he has gone along. He now makes jalapeno and cheese bagels as well as a pretzel bagel that is boiled in lye water, giving the bagel the gloss and deep-brown of a German pretzel.

The Collins Place store has started off with the same format as the original. Choose your bagel (plain, sesame, poppy, onion, salt, cinnamon etc) then a schmear (Yiddish for spread) of cream cheese.

“My grandparents would have used that word a bit different. They would have meant ‘do you want a little bit of butter’,” says Forman. “I call ours an ‘American’ serving of cream cheese. When someone asks for a little, I give them an ‘Australian’ serving.”

You then finish off your bagel with a selection of toppings, such as ocean trout, pastrami or honey, raisin and walnut.

Other menu items include a rotating range of soups, babka (sweet yeast cake) and bialy – the bagel’s Polish, un-boiled cousin. It’s a softer version with a dent on the top filled with onion and poppy seeds.

There’s also more of a deli feel at the new store with take home jars of fermented pickles, sauerkraut, mini packs of salami and smoked salmon and jars of Shortstop peanut butter – meaning you can host your own bagel party at home.