The chef and restaurateur is moving into the meat business with Meatsmith, a top-end butcher on Smith Street. Together with ex-Peter Bouchier butcher, Troy Wheeler, McConnell will offer rare-breed and heritage meats from some of Victoria’s best producers.

“There’s already a strong movement of people going back to butcher shops,” McConnell says. “For us, it’s more to do with being able to connect with our producers and have an understanding of where it comes from.”

Wheeler is already in talks with farmers, tallying up a list of unusual cuts: old-school British beef varieties and rare breeds of sheep such as Ryeland and Southdown. There’ll also be a selection of chicken and duck, and native meats including roo and emu. “It’s about showcasing and honouring the farmer, all the hard work they’ve put into it,” says Wheeler. “Because it is a limited run, you might only see stuff every few weeks, or once every season.”

The team at the Builders Arms will also create sauces, stocks and pickles, while the Meatsmith crew will make its own charcuterie, salami, terrine and pates. “Troy’s fond of sausages, so there’ll be a hanging sausage display there as well,” says McConnell. “We’re also looking at a little wine shop in there, so you can come in and buy a one-kilogram T-Bone and a serious bottle of red.”

Housed in the former Soul Food Cafe, the fit-out is by design firm Herbert & Mason (Reuben Hills, Gingerboy Upstairs). Wholesale business opens in June, while the rest of us punters will have to wait until later in the year.

Meatsmith is slated to open on Tuesday October 13. 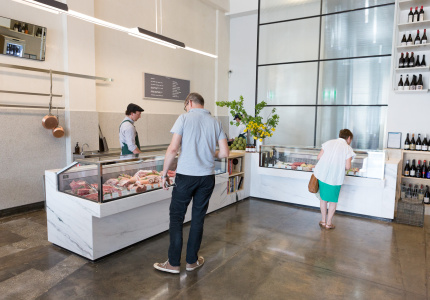