Like anyone in a creative field, chefs crave constructive feedback as they try new things. We spend a night in Añada’s test kitchen while head chef Russell Hall gets experimental. 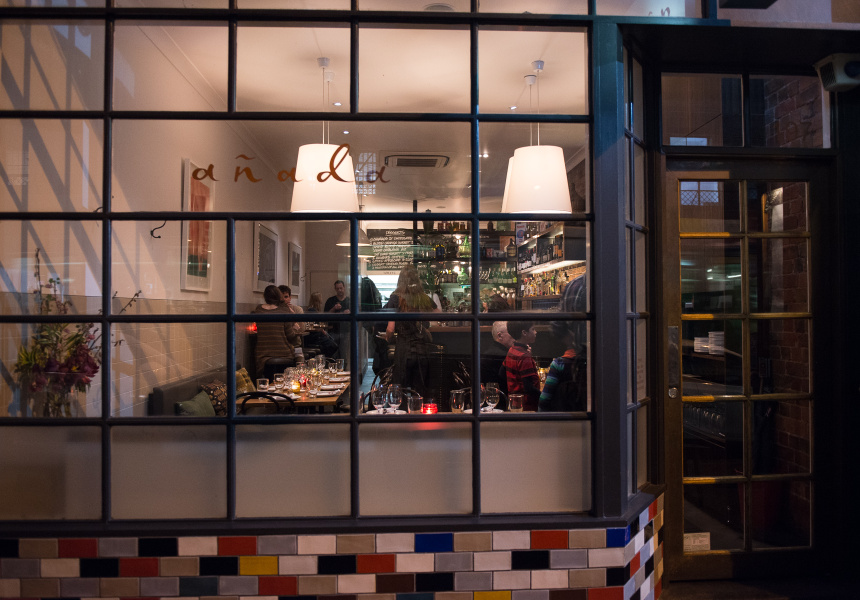 Usually, Añada is a restaurant in which to share a meal with friends. But tonight, 10 strangers sit snugly around the Gertrude Street haunt’s largest table.

We are head chef Russell Hall’s willing guinea pigs for the night.

This is Hall’s second test kitchen since he migrated from Bomba to its little Spanish brother, Añada, three months ago. The test kitchen is a clearly concept favoured by the Bomba/Añada/Green Park family; all have embraced the test-kitchen process as a chance to try out new dishes on the public and get valuable feedback. The test kitchen also gets people talking about the restaurant online and among their social circles.

“The idea came about because I felt that Añada had been a bit forgotten. I wanted to show people that we’re still here and still trying new ideas,” says Hall.

The idea of a test kitchen is not new, just think of Noma’s houseboat test kitchen or elBulli’s famed “workshop”, which experimented full time for six months of the year. Closer to home, Attica and The Press Club have spared no expense fitting out their purpose-built experimental kitchens. Press Club Projects is next door to the restaurant and includes a private dining room for eight and $200,000 worth of equipment for chef Luke Croston to play with. Attica shares its experiments every Tuesday night, hosting a five-course degustation for $125 per person.

“We can stand upstairs and prep away and get excited and go, ‘Oh yeah, let’s put this together’, but that doesn’t mean the customers are going to like it,” he says.

“It’s also a small kitchen and a small menu – you get bored quickly. So it’s fun to play around.”

Things appear to be starting on the right foot. Tittering conversation and introductions can be heard as we are handed score sheets for the night and each served an aperitif of Casa Mariol’s Vermut Negre – the deliciously spiced black vermouth that has just launched in Australia.

Pickled mussels in cider arrives, three each to a bed of salt. We politely serve each other before the table silently tastes and scores the first dish. This isn’t to be the favourite dish of the night, with one guest giving it a 2/10.

Next is a sumptuous scorched tuna toro with pickled cucumber and a squid-ink cracker. Hall pops his head out of the kitchen to explain that toro is the fatty underbelly of the fish, highly valued in Japan for sushi but sadly often thrown away in Australia.

The scorched toro is soft, rich, and seems to be a hit, although someone says they would have paired it with a cold beer rather than the white we’re drinking. Later, Hall tells me that a few people used their scoring sheet to query the sustainability of using of yellow fin tuna.

Digging our spoons into a bacalao (dried and salted cod) broth with broad beans, asparagus and dill, the table once again is silent, but this time it’s not for lack of conversation. One person brings the bowl up to her chest and closes her eyes, announcing: “This is the kind of food that makes you wish you were sick – so you can stay home and eat it all day.”

Hall later confirms this was the top-scoring plate of the night, but, interestingly, might not make it onto the restaurant’s menu.

“People like to gather around and have a good share here, and [the broth] is a very individual dish. It’s also very fiddly and we only have a small kitchen.”

It does seem counter-productive to hold a test kitchen and dismiss the top-scoring dish, but the responses collected here tonight are just one of the sounding boards Hall and his team must take into account. Añada’s menu needs to be innovative and exciting, not just crowd pleasing.

“Sometimes it’s fun to have that item on the menu that only pleases two per cent of the crowd,” he says.

Chatting one week later, Hall tells us that most of the dishes from the test kitchen will make it onto the menu, although he will be reducing the serving size and the salt content of the smoked salmon thanks to the responses of his test diners.

Hall confesses that usually he’s accused of under-seasoning his food, while one of his chefs can be over zealous with the salt.

“That’s why [the test kitchen] is also a good chance to observe the other chefs, and make sure we’re all cooking a dish the same way.”

Following the success of the first two, Hall plans on holding an Añada’s test kitchen every few months. For a chance to be part of the next one, keep an eye on the restaurant’s blog and Facebook account.