We talk to chef Tim Sweeney who learned his craft at Michelin level and has translated that work ethic into cooking great food at his Irish pub, The Last Jar. 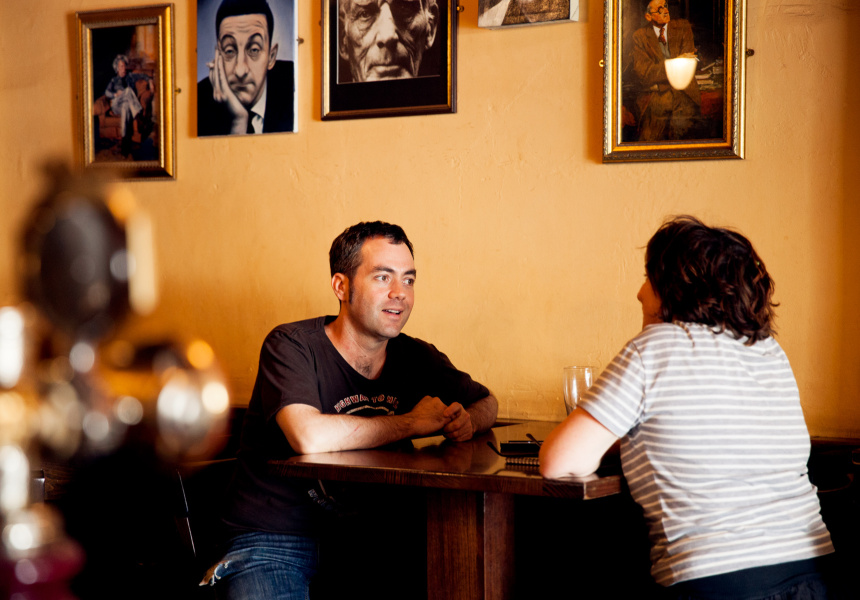 There are chefs, and then, there are chefs. The former cook to make a living; they get up and go to work to pay the bills. The latter are hardcore, the ones who get to work a couple of hours early to be “en place” for a busy day ahead; the ones who eat at restaurants on their days off and the ones who don’t talk about much else except, perhaps, the latest menu Pierre Gagnaire just put online, or Sean Brock’s most-recent Instagram pic.

Tim Sweeney, of West Melbourne’s Irish pub The Last Jar, certainly fits into the latter category. The 40-year-old chef, who grew up in Gympie, Queensland, started an arts law degree at Queensland University when he finished school but didn’t finish. Instead he started cooking at 24, an age considered ancient in the cooking world and a little trying. “Other chefs expect you to know more than you do. I knew more than a 16-year-old apprentice, but the slate was pretty clean. I suppose their thinking might have pushed me a more,” he says.

Cooking was, “Something I was interested in,” he says as we sip on pints at The Drunken Poet, his other business in West Melbourne which is a bar and live-music venue he owns with his business and life partner, Siobhan Dooley.

After leaving uni for a year of cooking in Brisbane, Sweeney decided the kitchen was the place he wanted to be. “I basically threw myself in the deep end to learn as fast as I could,” he says.

The deep end was a ticket to London where his first job was at The Brackenbury in Hammersmith. A small but good-quality restaurant, Sweeney says, “It wasn’t too high-end, but it was a great place to start,” adding that he filled the position chef April Bloomfield – now of The Spotted Pig in New York City – had left.

One of the best and worst times in London for Sweeney was under the guidance of esteemed chef Marcus Wareing at award-winning Petrus. “Marcus was a particularly hard task master; in my interview he told me he didn't really like Australians,” he says, “although, I learned a lot at Petrus and was grateful to work there.” He says the greatest lesson Wareing taught him was to write everything down, “Everything! Because in six months’ time, it can be really difficult to remember exactly how something was made,” he says. “I aspire to have his [Wareing’s] attention to detail.”

Sweeney then moved to Dublin after six months with Wareing and took a job at The Commons, a Michelin-starred restaurant on St Stephen’s Green in the city, where he met Siobhan who worked there as the functions manager.

When he left The Commons he moved on to Thornton’s Restaurant in Dublin, taking a pastry-chef position. Within the first few months he became head pastry chef when the boss, “did her back and it was up to me to do the job.”

He was in the deep end again and didn’t just tread water, he swam. “At that level you’re making six different types of bread, 10 petit fours, pre-desserts, the lot, every day. You’re only going to learn.”

He went on to another Irish restaurant, called Mint. Its head chef, Oliver Dunn, gave him some contacts in Australia when he and Siobhan decided to move here in 2004. “It was Brisbane or here to Melbourne and we decided here because … well, it’s a great city.”

Dunn put the chef in touch with UK-born Stuart McVeigh who lived in Melbourne. McVeigh is now the owner and operator of Union Food & Wine in Ascot Vale, but was then the head chef at Le Restaurant in The Sofitel. Melbourne quickly became home – personally and professionally – for Sweeney. “Stuart is one of my absolute heroes,” he says, “I learned so much from him.”

Le Restaurant wasn’t Michelin but it was intense and high end. Sweeney went on to cook at North Melbourne’s The Courthouse with chef Stephen Bourke, who he says is another hero of his. He also worked at The Botanical with Bourke and chef Paul Wilson.

While he was cooking, Siobhan was looking for a business and found the space on Peel Street, West Melbourne that was to become The Drunken Poet. “I hadn’t realised how bad Irish pubs were in Australia until I left,” he says. He and Siobhan saw a gap in the market for somewhere authentic, with live music. The bar is now eight years old, with local musicians playing regularly.

Sweeney and Dooley then opened The Last Jar four years ago and while he doesn’t miss the intensity of Michelin-level work, he’s brought that discipline to the kitchen here.

“We work with a high level of intensity at The Last Jar,” he says. It makes everything it can from scratch, including baking the soda bread, churning the butter, curing the fish and salting and smoking the bacon.

“But what I do now is less about being clever with food and more about taking really good-quality ingredients and giving them some love.”

We’ve been sitting here a while now, our glasses are empty and what has struck me about Sweeney is his stillness; he smiles and jokes, but I can’t imagine him ever getting flustered. What has tested him? In such an intense world, what, if anything, has pushed him over the edge?

“You’re hanging out there in the wind when you own your own business,” he says, “it is scary.” But he says having Siobhan has helped him work through his anxieties,. “We talk about the businesses most of the time, but it’s what we love.”

Another strength for the couple and their business model is that they don’t have a lot of competition in Melbourne. “We don’t really have a direct competitor, but we do know that Irish food isn’t going to become the new Mexican,” he says, smiling. He says he’s not too sure how he fits into the Melbourne dining landscape. “I guess we just do what we do and don't really worry about what everyone else is doing. We don’t follow fads, we just follow our muse and put it out there.”

If he were give advice to a young, ambitious chef, what would it be? “Be careful of the pastry chef at Thornton’s – she's going to drop you in it and you'll break the Pacojet and the head chef won't let you forget it!” he laughs, “And write everything down.”

Two businesses, one partner, a love for a pint and an all-consuming focus on the food industry certainly puts Sweeney in the hardcore category. What does he do on his day off? “We go out for dinner, eat good food and wine.” There is no doubt where he belongs.