Few chefs take their role as guide and teacher as seriously as Pierre Khodja, owner of Camus. 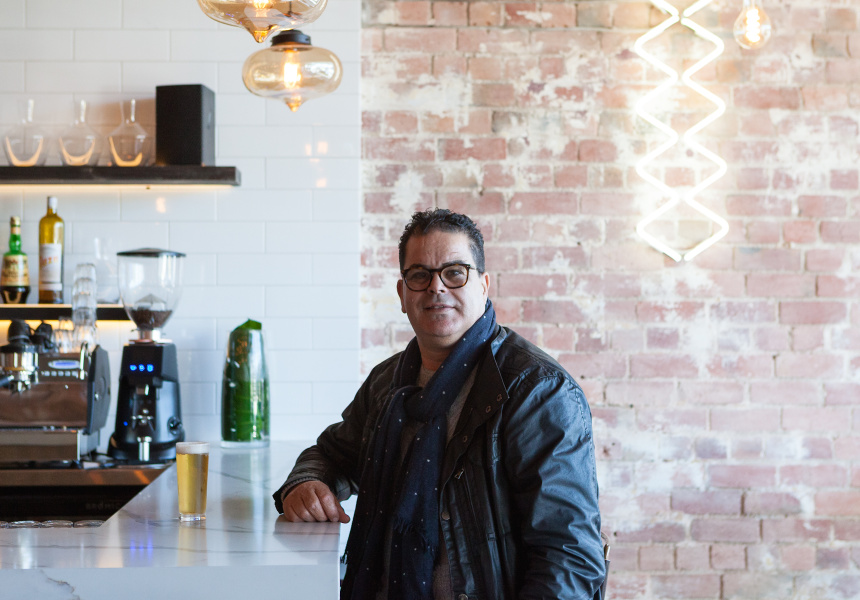 There were many reasons I wanted to talk to Pierre Khodja. There’s his background and training: the Algerian-born, French-raised chef has been cooking in Victoria since 2001. He brought his North-African heritage, classic French training and Michelin-starred experience to Canvas in Hawthorn, followed by an award-winning stint at the Flinders Hotel on the Mornington Peninsula.

And there’s his love of the industry: he works just as hard as he did when he was starting out. He’s recently realised a long-held dream and started his own restaurant, Camus in Melbourne’s Northcote – named after fellow French-Algerian, Albert Camus. To take this step in the unpredictable and fickle hospitality industry, when he could just as likely grab a top-tier executive chef role, is either very brave or completely nuts. Or both. I wanted to find out.

Khodja’s affinity with the philosopher Camus, besides their mutual birthplace, is acknowledged on the walls via quotes such as “To create is to live twice.” The phrase has a dual relevance – back in 2002, Khodja nearly died, spending three months in hospital after an explosion in the kitchen. While it was a life-changing ordeal, Khodja would prefer to focus on the now.

For instance, his love for the industry is palpable. He sees his responsibility for training staff as critical to its future. Beyond being a chef and a boss, Khodja describes himself as a father and guide. “My team work with me, not for me,” he explains. “My staff are free to talk to me about anything. There’s such a shortage of chefs here, and if they’re not supported at work, it can get too hard and they can just change jobs whenever they want. It’s about commitment.”

He often displays a distinctly paternal side toward his staff, dishing out free advice on matters as diverse as their knife technique to their shaving habits. “They pick up habits, good and bad, and if they want to learn I will teach them. Some need help with their grooming, others need to learn how to maintain their knives, others are always running late,” he says. “I’ll help them but they must want to learn. If they just want to be on TV, that’s not going to work.”

Obviously, the need to nurture is baked into the chef’s DNA. Growing up in Algiers, Khodja was one of nine children. Now, he’s the father of three daughters. But he also learnt the connection between cooking and caring by hanging onto his mother’s apron strings. “We were very poor, and my mother was amazing. She would go to the market and she’d buy very, very cheap stuff and then she’d make food like I never tasted,” he says. “In the kitchen at home, the knife didn’t cut well, the pot had one handle but she could make such great food and that’s what I love about mothers. They know what to do. If you have a pain they touch it, it’s gone.”

He kept cooking with his mother, gradually taking on responsibility for his siblings. “My father was an alcoholic and wasn't strict with discipline,” he says. “My mother kept us together and I still keep us together. There are six of us now around the world.”

That dedication to family never left him. Monday and Tuesday are off-limits to work. Instead, they’re regularly set aside for Khodja to cook for his wife and daughters, and to visit other restaurants. “A good cook is dedicated, very disciplined and goes out to eat,” he says.

He’s also a committed disciple of the ancient art of the dinner party. There are some firm but fair rules, however. “There are no screens at dinner,” he says. “But there are people talking and connecting, I love it! My house is a hotel. I love feeding people.”

While being at Kodja’s kitchen table sounds like a treat, I don’t envy the young man who may want to date one of his daughters. “He’s got to be well-educated in food,” he says, thoughtfully. “If someone takes my daughter out for a pizza – on your bike, mate. You have to be around people who like good food. It makes life better.”

Khodja just kept cooking for work and his family, happily admitting he’s not too handy at much else. “If you ask me to record something or fix something for you, forget it,” he laughs, “but give me an onion and potato and I’ll make you a good lunch.”

Having a sturdy culinary education is at the heart of Khodja’s entire ethos. Having a classical French culinary background is fundamental to his style. “You can’t build a house on sand, you must have a solid foundation,” he says. “As a chef and as their leader, sometimes I have to build the foundation from nothing, it can be very hard, but my philosophy is to give them what I have, you must help to get them to a certain level.”

Eating at Camus is a powerful reminder that good food really does make life better. Khodja insists that everything be made in-house or brought in whole – from the guinea fowl, rabbit and fish, to the six goats butchered per week for his braised goat dish with caramelised onion and apricot. Bread is made on-site, as is the ice-cream. “Everything,” he says. “We make everything.”

It took 18 months to plan and build Camus. Khodja did most of the work himself. What exactly did he want Camus to be? “A comfortable restaurant where it’s affordable and it’s like people are coming into my living room. I want people to treat it like their other home.”

Pierre Khodja is certainly brave, maybe a little nuts (and really, who in hospitality isn’t?) but mostly he’s kind and generous. The chef keeps his world together by feeding it well. “I am inside the pot where ever I go,” he says to me before I leave. “My life is food.”