She takes oil-painting classes, is a self-confessed book nerd and may well become a food historian. There’s more to the South African-born, Neighbourhood Wine chef than her cooking. Almay Jordaan in Books for Cooks Almay Jordaan in Books for Cooks

Almay Jordaan, co-owner and head chef of North Fitzroy’s Neighbourhood Wine, asks me to meet her at Books for Cooks. “It’s my happy place,” she says. The chef is a book geek and a frustrated food historian with a love of painting. She has a holistic commitment to her craft you rarely see in any chef.

Jordaan grew up on a farm in South Africa. “In the Western Cape, about two-and-a-half hours south of Cape Town,” she says as we settle into the book store’s lounge chairs.

She ate braai (South African barbeque) so regularly at home it was only when she went to boarding school she realised other people didn’t eat like she did.

“My family grows table grapes and we braai’d with grapevine wood – I thought that’s what everyone did,” she says, laughing. Her favourite dish from the braai is still lamb chops cooked by her dad. “He renders most of the fat but they’re still medium-rare, I thought that’s how everyone cooked them.”

She grew up cooking at home, developing a love of baking from her mother, also a good cook. She points to a book behind me, The Women’s Weekly Birthday Cake Book, “That’s still one of my favourite cookbooks, it had such an influence on me and my love of baking.”

But her reading goes way beyond a nationally loved birthday-cake book. Her food-writing influences include, M.F.K. Fisher, Ruth Reichl, Lannice Snyman, Mark Kurlansky and chef Pete Goffe-Wood, but confesses she’s currently not reading a food book but revisiting Kurt Vonnegut’s Slaughterhouse-Five. She returns to cookbooks and books about food – both fiction and non-fiction – often. “I’m fascinated by the world of food that has nothing to do with eating or dining.”

Jordaan studied cookery and pastry at The Institute of Culinary Arts, Stellenbosch and took on a degree at the University at Cape Town in classical history, French and journalism. “The aim was, and probably still is, to become a culinary historian,” she says.

Yet the kitchen beckoned and she worked with the aforementioned South African chef, Goffe-Wood. “He taught me so much about the details of cooking; the correct use of fat, seasoning and vinegars; balance. It was an extraordinary time with him.” She wanted to work in France, but South Africans couldn’t get a visa to France. “So I went to London.”

Her first job was at Babylon Roof Gardens. “The hours were insane, and while it was fine dining with beautiful ingredients, the egos were insane, too. It was cutthroat, which isn’t my thing. Girls were not promoted at all in the kitchen. I left; it wasn’t what I wanted.”

She found herself at Vinoteca in Farringdon, not far from Fergus Henderson’s St. John, where previously she had done a four-day stage with him. “I got to butcher some strange birds and beasts. Best stage ever,” she says of St. John. At Vinoteca she met sommelier Simon Denman, now her husband and business partner at Neighbourhood Wine. When his visa ran out, they thought they’d give Australia a shot.

Denman is from Brisbane “but it’s not really for me there,” Jordaan says of the Sunshine State. They moved to Melbourne six years ago, without knowing anyone. Jordaan started working with chef Ian Curley at the City Wine Shop. “I really get and really like what he’s doing with his food,” she says. She went on to head up the kitchen at the now-closed St Jude’s Fitzroy, currently Rice Queen (which she opened as head chef). All the while, though, she and Simon were looking for a place of their own.

They found one of the quirkier locations in Melbourne dining. A former gambling den owned and operated by the Carlton Crew – the infamous subjects of TV show Underbelly – and turned it into Neighbourhood Wine in 2013.

She struggles to define her food. “Simon uses the word ‘rustic’,” she says. “I want the produce and how I’ve treated it to speak loudest. It’s delicious and straightforward.”

Jordaan tunes out from the kitchen every Wednesday afternoon. The chef has started oil-painting lessons. “It is three hours out of my time. It’s important for me to have an artistic outlet that’s not food. When you own a restaurant, the artistic side goes out the window because you have a business to run, it’s not enough, so I paint.”

During our chat, Jordaan and I meander through the Queen Vic Markets and come full circle back to the bookshop. As we say goodbye, she wanders back in. “I’ll just have a quick look,” she says, but something tells me it won’t be quick. 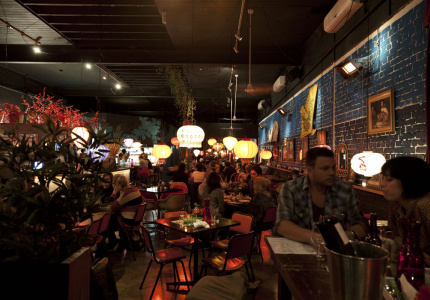