In pozzetti beneath the colourful terrazzo countertop, there are rotating specials that might include tiramisu and Basque burnt cheesecake; flavours inspired by the Coda and Tonka chef’s Italian-Indian heritage (sugared almond, and spicy chai); and a few very welcome curveballs. 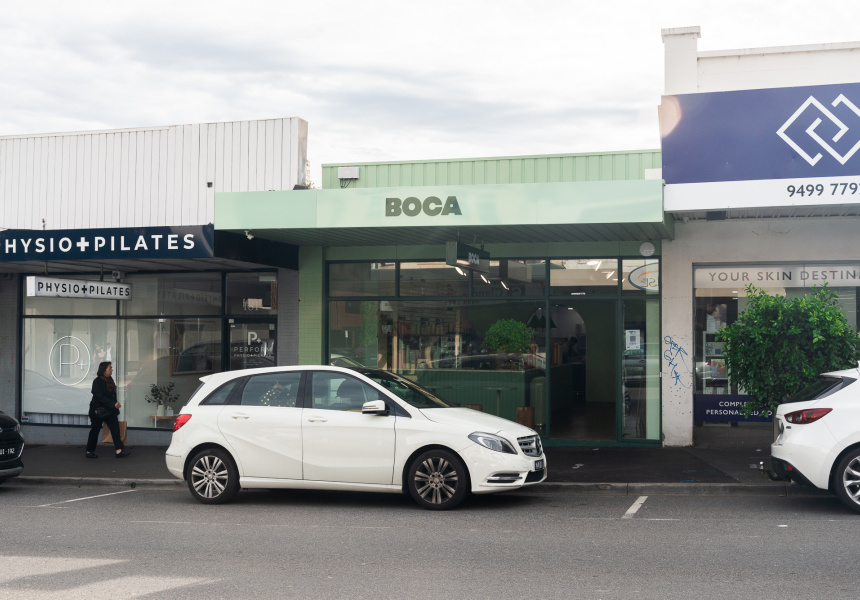 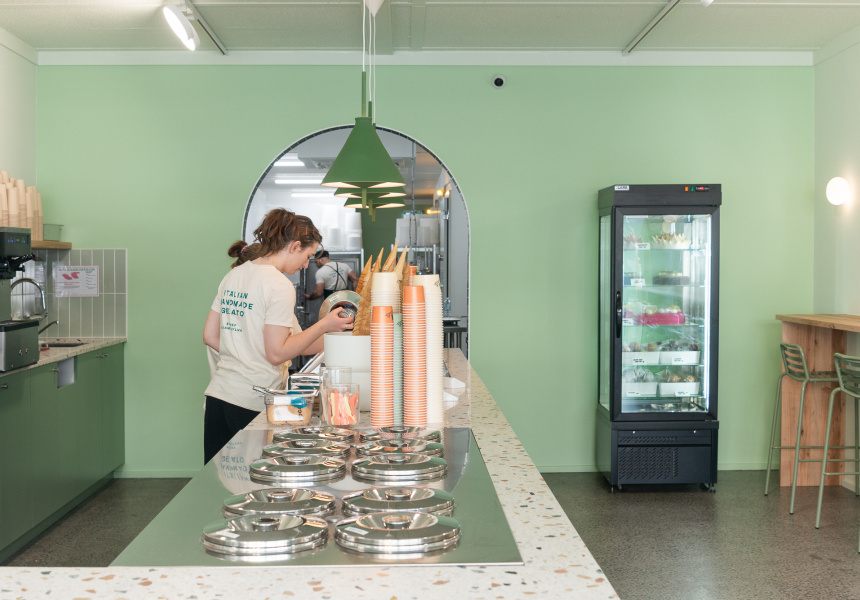 From opening a Coda outpost on the coast to taking on the creative culinary director role at W Melbourne’s new restaurant Lollo, chef and restaurateur Adam D’Sylva’s had a busy few months.

But now the self-described “savoury palate” is shifting his attention to something sweeter.

His newest project is Boca, a gelateria created in collaboration with former Coda and Tonka pastry chef Monika Frkovic. After hosting summer pop-ups at Pepe’s and La Manna supermarket, the two decided to set up shop permanently in Ivanhoe.

“I pretty much just live down the road,” says D’Sylva. “I think Ivanhoe needed something like this.”

Look for the pastel-hued shopfront on Upper Heidelberg Road, where large windows let a ton of light into a space splashed with many shades of green. There’s a colourful terrazzo counter and an archway at the back providing a glimpse into Boca’s day-to-day operations.

“We were just talking shit about doing this and all of a sudden it came to fruition,” says Frkovic, who joined D’Sylva at Tonka in 2014. “I never really knew that I could make a full career in gelato.” Frkovic has run the gamut of frozen desserts in the past, but at Boca she’s sticking mostly to classic Italian flavours (with a few very welcome curveballs).

“You’ve gotta get that balance of expectation and surprise,” she says. “If we didn’t have lemon or salted caramel, there’d be riots in the streets.”

For the traditionalists, pistachio, coffee and bacio (chocolate-hazelnut) will always be available. They’re kept in pozzetti (stainless-steel drums) beneath the countertop alongside peanut butter, mint-choc chip and a very pale pink bubblegum gelato made with real Hubba Bubba. “I’m not putting any colouring in it,” Frkovic says. “Bubblegum is artificial enough,” D’Sylva adds.

Meanwhile, Frkovic is using the specials board to road-test some less traditional flavours. Tiramisu, Basque burnt cheesecake, pumpkin spice and liquorice have made appearances so far, but the menu will rotate regularly.

And while D’Sylva’s leaving most of the menu development to Frkovic, he’s made a few additions highlighting his Italian-Indian roots. Representing one side is a heavily spiced chai gelato. And repping the other is Confetti, a slightly creamy sorbetti spiked with Jordan almonds. “It’s a nod to my mother,” D’Sylva says. “In Abruzzo, where she comes from, they’re famous for making these sugared almonds. Everyone in the world buys them.”

Gelato and sorbets can be served in cups or cones, or turned into shakes, with optional (but strongly recommended) toppings. They include house-made cookie crumbs, mini malt balls honeycomb and melted chocolate from the constantly flowing, built-in fountain.

In the freezer, find an array of different choc-tops, traditional tartufo (chocolate-coated gelato balls) and frozen cakes such as passionfruit Bombe Alaska.

And in the coming weeks the team will be launching a Masterchef series featuring custom gelato creations from former competitors such as Emelia Jackson, Diana Chan, Sashi Cheliah and Khanh Ong. Keep an eye on Boca’s Instagram page for updates.