This family-run Melbourne bakery has been feeding hungry locals since 1992, and it makes some of the best-value snacks in the city – including these transportable golden spinach pies. If you find yourself on Sydney Road, in the Melbourne suburb of Brunswick, ask someone on the street where to find the best-value snacks. They’ll probably point you in the direction of A1 Bakery, a family-run joint that’s been feeding hungry locals since 1992.

Middle Eastern pizzas, pies and breads abound at A1, as well falafel, but for a couple of gold coins these spinach pies are little triangles of ecstasy.

The filling – made with fresh spinach leaves, onion and lemon juice, and spiced with sumac and cinnamon – is encased in a little golden parcel of pastry that’s easily transportable.

To make the dough, combine the honey, yeast, oil and water in a large jug. Add the flour and salt to the bowl of a stand mixer and mix on low speed with the dough hook while gradually adding the liquid, increasing the speed to medium as the mix comes together. If the mix becomes too wet, just add a little more flour. Mix for about 10 minutes until the dough is smooth and relatively soft. Cover with a tea towel and rest for 30–40 minutes.

Once rested, gently turn the dough out onto a floured bench. Portion it into 100g pieces and roll into balls. Roll each ball in flour and rest on a floured surface somewhere warm, covered, to prove for about 20–30 minutes.

While the dough rests, add all the filling ingredients to a large bowl and mix thoroughly with your hands. Stand for 10 minutes before tipping into a large colander to drain any excess liquid.

Take a ball of rested dough and roll out into a circle about 22cm in diameter.

Place a generous handful (about ¾ cup) of filling in the middle of each one. Flatten the filling out into a triangle with the points at 12, 4 and 8 o’clock. Pick up the edges of the dough at 10 o’clock and 2 o’clock and fold over the filling. Pinch the edges together and then fold the 6 o’clock flap over.

Pinch the corners and seams together so the parcel doesn’t leak. Lightly brush with oil. Repeat for the remaining dough and filling.

Bake on the prepared trays for about 15 minutes until golden.

This is an extract from The Broadsheet Melbourne Cookbook, which includes 80 recipes from the city’s best restaurants, cafes and bars. 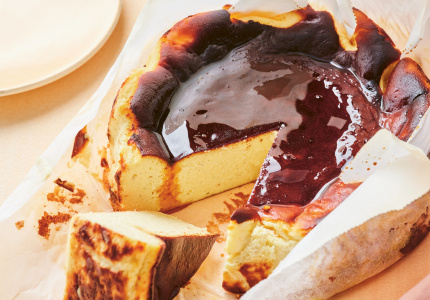 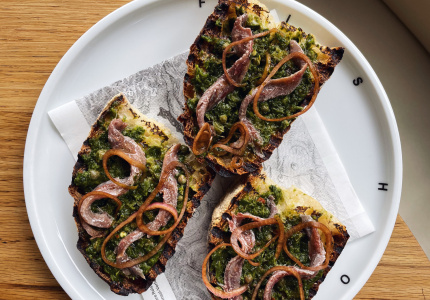 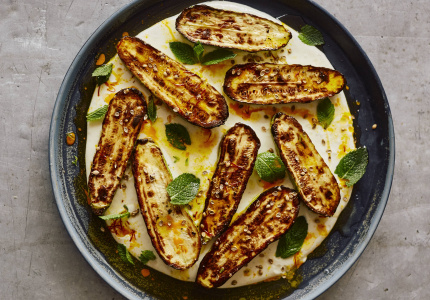