A fluffy Japanese cheesecake that’s like eating a cloud; a retro, heart-shaped Cherry Ripe-esque ice-cream cake; a lofty 10-layered Russian honey cake; what might be Melbourne’s only prickly-pear-flavoured cake; cannoli pyramids; and more. 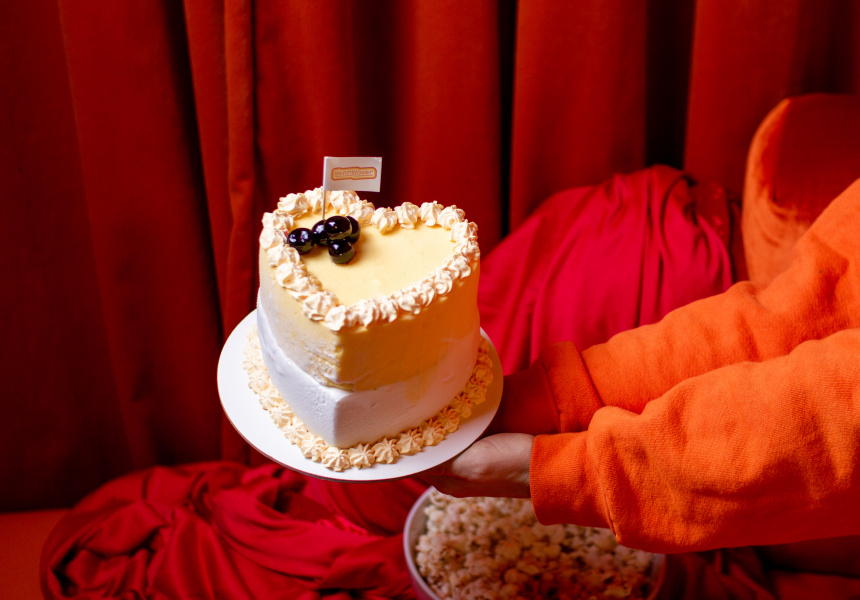 Kenny Lover’s Be My Quarantine cake 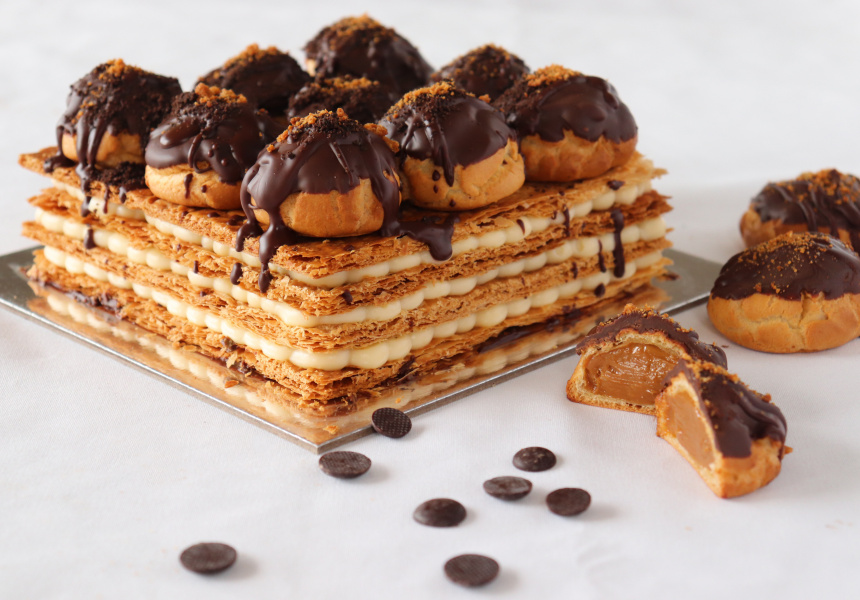 It’s often said that there are more birthdays around September – approximately nine months after the jolliness of the festive season.

So, should your birthday come up before we’re allowed to cut cake with loved ones, we’ve compiled a list of 15 you can order that venture beyond babka and Basque cheesecake, which have emerged as the official dessert sponsors of Melbourne lockdown.

Beehives’ Japanese Coffee Cheesecake, $25
Ever wondered what it’d be like to eat a cloud? Beehives’ Japanese cheesecakes might be the closest you’ll get to that. Run by three sisters who started baking during Covid-19, these Japanese cheesecakes are lighter and more aerated than the ones you might have tasted at cult international chains such as Uncle Tetsu’s. You can also freeze any leftovers – just carve a slice from the frozen loaf, microwave it for 30 seconds and watch it jiggle. Flavours include the original signature cheesecake, Kyoto matcha, and chocolate – but this is one of the only places in Melbourne you’ll find a coffee version. Order online for Melbourne-wide delivery.

Milloha’s Choux Milloha, $32
Milhojas (which means “1000 sheets”) is a version of mille-feuille that’s popular in South America and Spain, with pastry layered alternately with dulce de leche. But this decadent version from Colombian architects Diana and Jorge Gonzalez – which they’ve called “milloha” – is a little different. It’s topped with dulce de leche-filled choux pastry puffs that have been coated in 70 per cent Colombian dark chocolate. You can get around nine serves from one cake. Pre-order at least two days in advance for delivery or pick-up in Heidelberg.

Mork’s Swedish Bun Pudding, $30
This sugary lovechild of Swedish buns and bread-and-butter pudding will make you wish it was still winter. Mork chocolaterie has taken its custard-soaked buns and moulded them into one, indulgent pud (that serves six to eight) packed with dried fruit and warming winter spices. Order online for North Melbourne pick-up or city-wide delivery.

Raya’s Ribena Butterpound Cake, $12 or $50
The latest addition at Raya, the new CBD cakeshop-slash-cafe by Insta-famous baker Raymond Tan, is a deep dive into nostalgia. Inspired by Ribena, this pretty pink creation is made up of buttery pound cake, freeze-dried-currant cheesecake cream and blackcurrant jam. It’s available whole or by the slice. Pre-order by Wednesday for delivery on Saturday (pick-up is available too).

Laantaan’s Thai Tea Volcano With Brown Sugar Jelly, $11
If you want a taste of online bakery Laantaan’s bestselling Thai-inspired desserts, keep an eye on its Instagram page to find out when pre-orders open. It’s known for custard-filled buttermilk buns and Swiss rolls, but the Thai Tea Volcano is perhaps the most indulgent option: featherweight sponge cake is drowned in Thai tea custard, then topped with the kind of super-sweet jellies you find in bubble tea. Pick-up and delivery (to a rotating selection of suburbs) is available.

Attica’s Pavington, $65
Australia and New Zealand may never solve the mystery of who invented the pavlova – or who gets to claim top chef Ben Shewry – but one thing’s for sure: the Pavington was born in Melbourne. Attica’s hybrid creation is a cross between a lamington and a pavlova – the bottom is sponge cake covered in coconut, the top is a classic pavlova, and a thick layer of Yarra Valley raspberry jam sits in the middle. It serves six to eight. Order online for pick-up in Ripponlea or delivery to select suburbs.

Kenny Lover’s Be My Quarantine Cake, $60
It was originally conceived as a gift to send others in lockdown, but there’s no reason you can’t order Kenny Lover’s massive, two-litre ice-cream cake for yourself. The delightfully retro heart-shaped cake comes in two flavours: there’s a Cherry Ripe-inspired version with chocolate, cherry and coconut, and a vegan option with mandarin sorbet and a coconut base. According to chef-owner Mike Baker, it’s like something “straight out of the Woman’s Weekly Birthday [Cake Cookbook]”. Pre-order online for in-store pick-up in Thornbury.

Good Pudd’s Mixed Box, $60
We have the pandemic to thank for Good Pudd, the side hustle from UK pastry chef and (temporary visa holder) Carley Scheidegger, who’s worked at Lune and Lesa. She releases a new dessert menu every week, but her mixed box is a whole cake made from a quarter of each option – a delight for the indecisive. You might get treacle tart with crème fraîche, almond frangipane with mandarin jam, Basque cheesecake, and chocolate-date tart with tahini custard – or another combo entirely. Order via Instagram for delivery in metro Melbourne.

Cutler & Co’s Celebration Cake, $38
Dining in at Cutler & Co might seem like a distant memory, but cast your mind back and there’s a good chance you ended your last meal with the silky, signature chocolate delice. It now exists in a cake form that serves four people. The chocolate-mousse cake has a hazelnut base and is glazed with milk chocolate that’s been spiked with Cutler & Co Project Whisky by Starward. Order online for in-store pick-up in Fitzroy or delivery within 35 kilometres of the CBD.

Calere’s Roll Cake, $8.50 to $40
Spongy Japanese roll cakes are the comforter blankets of the dessert world, and tiny Gertrude Street coffee nook Calere has them down to a fine art. Uber-soft sponge is curled around flavoured chantilly cream and cream cheese. Options rotate but might include matcha, coffee-rhubarb, and oolong tea. Order online for pick-up or delivery – you can get a single slice ($8.50), a tasting box with four slices ($32) or a whole roll ($40).

Beatrix’s Chocolate Sour-Cream Layer Cake, $9 to $70
Beatrix owner and cookbook author Natalie Paull calls this “the ultimate birthday cake”. Sour cream is added to the chocolate-butter cake batter and the chocolate-cheesecake icing to introduce a light tang, while freeze-dried berries add sourness and crunch so you can have a giant wedge and not feel (too) overloaded. Pre-order online for pick-up at the North Melbourne bakery. It’s available by the slice ($9), as a small cake for four to eight people ($35), or as a large cake that serves up to 16 ($70).

Felix Goodwin’s Gluten-Free Chocolate, Wattleseed and Whisky Cake, $75
Hotel Windsor pastry chef Felix Goodwin launched this cake for Father’s Day, but it’s now earned a permanent spot on his gluten-free delivery menu. (Goodwin, who has coeliac disease, runs a dietary-friendly bakery from the Windsor kitchen.) Three layers of cocoa and dark Callebaut chocolate are used for the sponge base, with Lagavulin-whisky-spiked caramel in between, and wattleseed buttercream around the outside. Think notes of smoke, vanilla and coffee. Order online for CBD pick-up or delivery to select suburbs.

All Are Welcome’s Medovnik, $82 or $160
North-side bakery All Are Welcome has a stacked range of celebration cakes, but if you want to go big, opt for the signature Medovnik, a lofty 10-layered Russian honey cake that’s been on the menu since day one. Each biscuity layer, spiked with Tasmanian leatherwood honey, is rolled out and baked separately. They’re then assembled with condensed-milk jam and encased in honey buttercream. Pick-up and delivery are available with 48 hours’ notice – you can get a six-inch cake for up to 12 ($82) or a 10-inch cake for up to 24 ($160).

Bibelot’s Hazelnut Praline Crunch Gateaux, $10.50 or $55
Modern French dessert shop Bibelot has a small yet sharp cake menu, but it’s difficult to look past this impressive creation if you’re a chocolate diehard. Hazelnut dacquoise is layered with gianduja (choc-hazelnut) mousse, chocolate crémeux and chantilly – then crowned with a hazelnut-and-chocolate crumble. The full-sized cake ($55) is also adorned with chocolate and salted-caramel macarons, but there’s a single serve for $10.50. Pick-up and delivery (within 15 kilometres of South Melbourne) is available Friday to Sunday.

Burch & Purchese’s Prickly Pear Cheesecake, $10
Bulbous and adorable, this is almost certainly the only prickly-pear-flavoured cake in Melbourne. Burch & Purchese’s cactus-fruit cream encases a nucleus of lime and vanilla mousse on a white-chocolate biscuit base. It’s topped with a green, 2D chocolate cactus, a raspberry jelly orb and a squirt of lime curd. Order online for pick-up in South Yarra.

Honourable Mention: Cannoli Cakes
Melburnians love cannoli, which is why some of those who do them best have reduced the minimum sizes for cannoli cakes during lockdown. The OG cannoli family, T Cavallaro & Sons in Footscray, now takes orders for pyramids of 12 freshly piped cannoli instead of 24; Cannoli Bar in Avondale Heights starts at a 10-cannoli minimum; and Cannoleria By That’s Amore is releasing smaller cakes (seven and 18 cannoli respectively) in the next couple of weeks.